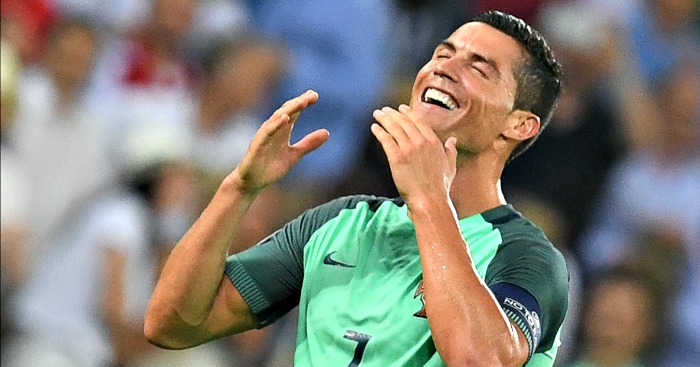 Joe Ledley has expressed his frustration at Cristiano Ronaldo, who he claims is “never in the game” compared to Gareth Bale.

Ronaldo scored once and assisted another as Portugal brought Wales’ memorable run at Euro 2016 to a halt in the semi-finals.

The Real Madrid forward will have another shot at securing international glory after his decisive performance on Wednesday, but Wales midfielder Ledley was unimpressed.

The Crystal Palace man played 58 minutes at the Stade de Lyon, and has compared Ronaldo unfavourably to his club teammate Bale. Nick Miller says that while the latter can do wonderful things, the former did do them.

“He’s one of those players who frustrates you,” Ledley said. “He’s never in the game compared to Gareth [Bale]. He’s always in the game, always on the ball, always wanting it, always dribbling and always trying to do something.

“They were two crappy goals. Ronaldo’s shot was useless. Normally he hits them from there but he scuffled the cross for a tap-in. With the header, the guy can leap, but apart from that he didn’t really do anything in the game.

“You can’t disagree with his ability. He’s a fantastic player, one of the best in the world. But we just had one of those days where things he did came off. He’s now in the final and you wish him well.

“They gave us a lot of respect in the game, sitting back and letting us have the ball. We tried to play our game but their system worked and in the end ours didn’t. We were missing key players. We want to achieve better things than this and hopefully we can do that with the World Cup.”