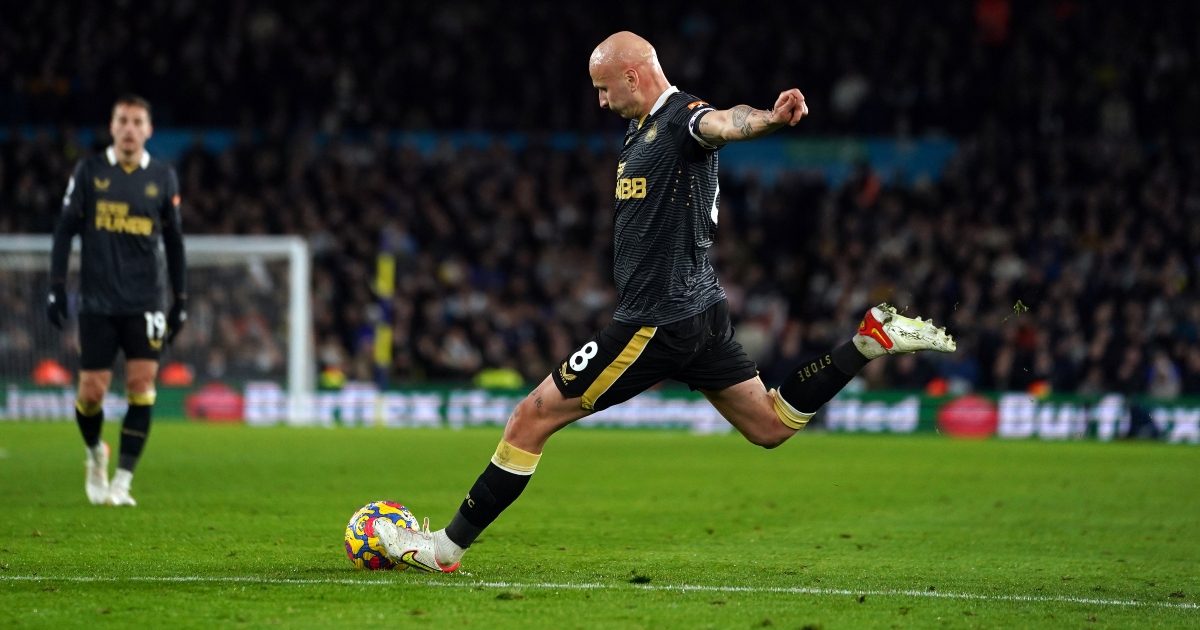 Newcastle United picked up a crucial 1-0 win at Leeds United thanks to Jonjo Shelvey’s second-half free-kick.

Shelvey curled home the only goal from 20 yards in the 75th minute and Newcastle were rewarded for their lung-busting effort with just their second win of the season.

Eddie Howe’s side were under the cosh for long spells at Elland Road but ran themselves ragged to deny Leeds a third straight league victory and climb to within a point of safety with a game in hand on fourth-bottom Norwich.

Back-to-back league wins had lifted Leeds nine points clear of the bottom three and they are now looking back over their shoulder after being punished for failing to cash in on their earlier dominance.

The Swiss did just enough to rush the Leeds forward, who fired weakly straight at visiting goalkeeper Martin Dubravka.

Schar required lengthy treatment after his lunging block and the visitors’ back four was given no respite as Leeds swarmed forward in search of an early breakthrough.

Newcastle survived and went close themselves in the 28th minute when Shelvey’s thumping volley was well saved by Illan Meslier.

Raphinha led Newcastle left-back Paul Dummett a merry dance to set up another Leeds chance, with the visitors forced into some desperate defending.

Joelinton then limped off just before half-time and was replaced by Sean Longstaff, but Newcastle were not unduly affected and as the action flowed, Leeds had to defend themselves as Mateusz Klich headed Ryan Fraser’s cross for a corner.

Leeds took control at the start of the second half. James and Raphinha both cut through the visitors’ defence, but the final ball eluded their team-mates.

Bielsa’s side have rediscovered their zest since the turn of the year and Newcastle were digging deep to keep them at bay.

Dubravka was warned by referee Chris Kavanagh for time-wasting and after Jack Harrison’s goalbound shot deflected off Schar, James failed to properly connect with the rebound.

Newcastle defender Jamaal Lascelles limped off – Dummett had already been replaced by Javier Manquillo – with Ciaran Clark sent on for his skipper.

But Howe’s side gave warning they were not done. Longstaff fired narrowly wide from 20 yards and soon after they silenced Elland Road by taking an unexpected lead.

Diego Llorente was penalised for his challenge on Manquillo on the left edge of the penalty area and Shelvey’s low curling free-kick beat Meslier, who could only parry the ball into the bottom corner.

With the wind sucked from Leeds’ sails, the home side became increasingly ragged in their bid to salvage a point and Ryan Fraser went close to a second for Newcastle after combining with Allan Saint-Maximin.

Meslier then denied Joe Willock in stoppage time as Newcastle sensed it was their afternoon and their travelling fans were finally left with something to celebrate at the final whistle.