That is how Johnny's first not-the-Premier League season would go. The Euro Super League gets forgotten... 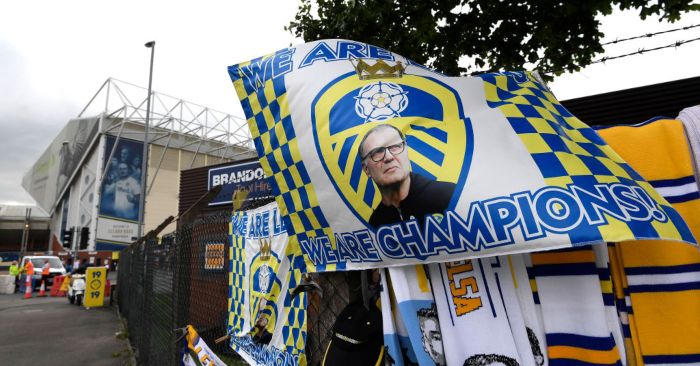 Why would we want anything other than Leeds winning the league and FA Cup and Burnley in a European final? Let them have their European Super League if it gives everyone else a chance to compete.

Turn off your mind, relax and float downstream. Let’s dream a little dream.

A European Super League has just been formed for the first time. 2020/21 is its first season. It’s a sealed league with no promotion or relegation and consists of the 20 richest clubs in Europe. England boasts six out of the top ten: each are allowed to join.

Liverpool, Manchester City, Spurs, Arsenal, Chelsea and Manchester United have all ceded from the Premier League, are now negotiating their own broadcast rights individually and are looking forward to playing the likes of Bayern Munich, Juventus, Barcelona and Real Madrid every week.

How does that make you feel?

The now not-the-Premier League, denuded of most of its money, with the vast bulk of broadcasting rights lost to the breakaway division, has absorbed the top six teams from the Championship. The ‘six up’ principle washes down the pyramid to fill the gap left by the leaving clubs. Leeds, West Brom, Fulham, Brentford, Cardiff and Swansea have been promoted.

Day one of the new season. No-one can predict who will form the top sides in the league. Supporters of all 20 clubs are excited because every single one of them has hope of finishing in the top five or six positions and getting into the three new European competitions: the New European Cup, the New UEFA Cup and the New Cup Winners’ Cup. All three are two-legged knock-out tournaments. All across Europe fans of the clubs that have been in the shadow of the wealthy are equally excited because a majority of sides start the season with realistic hope of a title win.

The winners of the leagues compete in the New European Cup. For the first season this is the highest finisher outside the six clubs that have left the league. This would be Leicester City.

Second to fifth play in the New UEFA Cup. For the first season, that would mean Wolves, Sheffield United, Burnley and Southampton would be entered. A sixth place is available if the FA Cup or League Cup winners or runners-up are already in the top five.

The New Cup Winners’ Cup is for the winners of domestic cups to compete in. If they’re already qualified for another competition, it passes down to the runners-up. Welcome, Aston Villa.

The cost of broadcast rights for this new season have been radically lowered as the teams with the most fans are now gone. BT Sport, Sky Sports and Amazon have thrown all their money at the new European Super League packages, believing it is where the big audiences and big money will be.

Because of this, clubs have to reduce wage costs massively to account for severely reduced income, but all players would still be well paid by normal standards.

The government, looking for a way to be popular and facing an ever-rising bill for type 2 diabetes, anti-depressants and myriad other costs associated with obesity, realises that with the rights now being relatively cheap at around £1 billion, state spending is the way to create a strong society, not austerity. They decide to buy the rights for three years and hand them to the BBC and ITV to show all live league football on a new free-to-air football channel, as well as on the main networks, knowing it will inspire an increase in physical activity in the nation, thus reducing the £14 billion per year type 2 diabetes bill and the £500 million anti-depressant prescription bills alone. It is pointed out that even small savings from better health outcomes will more than pay for the cost of the rights. Also, making football free on TV is a vote winner. It is a no-brainer.

There are some in the press who say this new season will not be as good without the six richest clubs, that the standard of play will be much lower and lack of top players will make it not as attractive to fans. Others disagree, and don’t care because they have never been more excited at the prospect of being able to compete meaningfully and having a chance of winning something. For so long they’ve had no hope. Now they have.

In the early stages of the season, Burnley make all the running; Newcastle start well, too, but have a blip in November. By Christmas, Dyche’s men are top and five points clear. Everton’s form is picking up after a slow start and Leeds United have won all their home games.

The TV audiences for the live games average at around seven to eight million. Barry Davies comes out of retirement to the delight of everyone over 55. Clive and Andy are back on ITV with Peter Brackley.

The third round of the FA Cup produces some big shocks with the big six now absent. West Ham United are beaten at Harrogate Town 2-0 and league leaders Burnley go down 3-0 away to Wycombe Wanderers. Without the big six and with most clubs’ best players now transferred to ESL clubs, everyone feels like they’ve a chance of progressing. With less money available for wages and transfers, managing, training and youth development all matter more.

In February Leeds batter a hapless and dejected Hammers 7-0 at Elland Road to move up to third. A big Wednesday night game, marketed as The War Of The Roses between the top two in Sheffield United and Burnley, attracts an ITV audience of 10 million as Wilder and Dyche go up against each other in lashing sleet and produce a classic a 3-3 draw.

The League Cup final is contested between Nottingham Forest from the Championship and Newcastle United. Forest are top of the league by eight points and look odds-on for promotion, Steve Bruce’s team have been up and down all season long, as high as second early on but 9th by late winter. Forest take an early lead and double it just before half-time. An early second-half goal by Real Madrid-bound Allan Saint-Maximin and it’s game on. A second on 88 minutes levels it. In extra-time Saint-Maximin runs the length of the pitch to score the winner. Newcastle have their first trophy since the Texaco Cup in 1975.

As the season comes to its final games. Ralph Hasenhuttl has put together a great run of form with Danny Ings the league’s top scorer on 29 goals; he has put them in contention for the title. Burnley have suddenly cracked under the pressure of getting to the New UEFA Cup final but losing to RB Leipzig, and by early May Saints are top with Leeds second by just a point. Behind them, coming up on the rails are dark horses Brentford, then Everton and Cardiff.

Both Wolves and Leicester are mid-table, having to rebuild after all their best players were poached by ESL clubs. In the three relegation spots are Aston Villa shorn of Jack Grealish, now playing for PSG; Crystal Palace, who have sold Wilfried Zaha to Juventus; and West Ham, who have slid down the Premier League glacier wearing moccasins and are bottom by some margin.

A classic FA Cup final between doomed Palace and Leeds United ends 2-2 and goes to penalties. The Whites triumph 5-4. Sales of branded Bielsa buckets go through the roof.

On the last day of the season it has gone down to the wire. Southampton are top with 75 points. Leeds are second with 73. Brentford are on 72. But The Bees have to play Saints at home. Leeds are against Swansea at Elland Road.

The games all kick-off at 3pm on the last Saturday of the season, broadcast live on BBC and ITV. The former has the Brentford game; the latter is at Leeds. A collective audience of 25 million tune in to see how the drama unfolds. A 1 -1 draw at St Mary’s hands the title on goal difference to Leeds, who win 4-0.

Everton finish fourth and a late recovery from Burnley sees them just take fifth and a European spot. Leeds’ victory in the Cup means Palace will play in the New Cup Winners’ Cup along with Newcastle.

Meanwhile, in the European Super League, the club with the most money won. Audiences varied from two million to less than 200,000.

This sounds like a dream, I know. But then 9.5 million people having their wages paid by the government would have sounded like a dream five months ago. Things can change. Things will change.

Do we want more oppressive financial hegemony, reducing competition, devaluing cups and increasing predictability, or a new future where almost every club has a chance to compete? Perhaps a better question is: why would we want anything else?