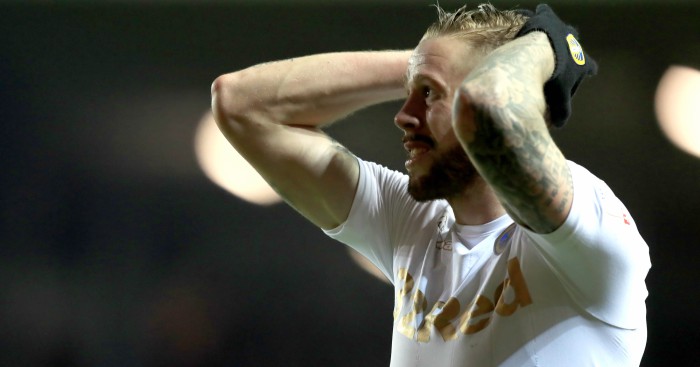 Radrizzani, who completed his 100 per cent buy out of former owner Massimo Cellino in May, has questioned the players’ commitment after seeing a promising start to the season evaporate.

“We give them everything possible to just focus on the football, as a club we support them in everything,” the 43-year-old Italian told talkSPORT.

“We gave them long-term contracts, we supported them in pre-season going on a camp in Spain, we did everything they wanted.

“But we didn’t get back their commitment, their passion and spirit, particularly in the game, a really important game when we played really poorly against Middlesbrough.

“For me it was the bottom of the season because there was no commitment, no passion, no spirit.”

That 3-0 defeat at the Riverside earlier this month came in current manager Paul Heckingbottom’s fifth game in charge.

Leeds sacked Thomas Christiansen in early February after a seven-match winless run, while former Barnsley boss Heckingbottom has won just one of seven games since arriving at Elland Road.

“I don’t want players in my team representing Leeds United with this behaviour,” Radrizzani added. “So I hope they can learn and be with me next year, playing better and with more commitment.”

Meanwhile, Radrizzani has apologised to Wolves for causing offence by seeking clarification on their relationship with agent Jorge Mendes.

Radrizzani, who recently questioned Mendes’ role at Wolves on Twitter, said he wants to copy their player recruitment policy if it is not breaking any rules.

He has written to the English Football League, the Football Association and the Premier League for guidance.

“I want to apologise to Wolverhampton if somebody has taken the tweet as to deny their success on the pitch and their quality,” Radrizzani said.

“It has nothing to do with that. They played a great game against us, they are a good team, they are on top of the league so they’re doing exactly as I wish to do for Leeds United. Congratulations to them so far in the season.

“My tweet, in a moment of frustration, was also done on purpose to bring attention to something I tried to raise as a subject to the (Football) League and other clubs since the beginning of the season.

“I’m not accusing anyone, but I would like to have clarification on the rules.”

Radrizzani believes Wolves could be circumventing Financial Fair Play regulations by not paying players the going rate and that Mendes’ influence as an intermediary also contravenes the rules.

Other clubs, including Aston Villa, have also raised concerns and the EFL has confirmed it is set to meet with Wolves to discuss the issues.

Wolves chairman Jeff Shi has dismissed the complaints as “laughable”.

More from Planet Sport: Top 10 tennis stadiums in the world by capacity (Tennis365).