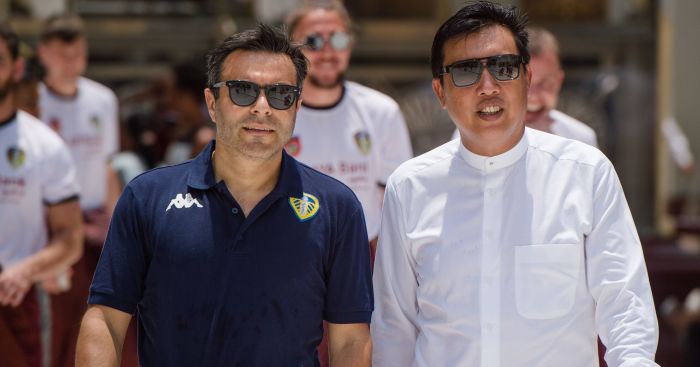 Leeds owner Andrea Radrizzani believes his club are being shortchanged by the English Football League’s broadcast deal with Sky Sports and thinks it is time to create a Premier League 2.

Sky Bet Championship clubs get the lion’s share of that, as they do with the money the Premier League gives the EFL in solidarity payments, but this only adds up to about £7million for each club.

The top flight’s clubs, however, get at least £100million from the league’s domestic and international broadcast deals.

Radrizzani, who bought Leeds in 2017, thinks this gulf is too wide.

Speaking at the Leaders Sport Business Summit in London, the 44-year-old Italian said: “The model of the Championship should be reconsidered because to keep changing owners every one, two, three years is not a fair system for the fans, for the clubs.

“It is really not sustainable to stay in the Championship, there are huge gaps between clubs coming down from the Premier League with parachute payments to the other teams on lower budgets. And the money generated from TV rights is small because it is split between 72 clubs.

“Maybe they need to consider another way to create value, Premier League 2 or something, that is sustainable even for the people who are not promoted.”

Asked by reporters if he had discussed this with other Championship chairmen and owners, he said he had.

“I think the other chairmen would love to open a conversation because the time is getting ready to consider what to do so we don’t have a crisis every two years when a club goes bankrupt or changes ownership,” he said.

“I think we should consider that a club like Leeds, that is watched by 500,000-600,000 people live on Sky, is getting only £2-2.5million from the league (in TV rights) and actually penalises us because we’re always on TV, maybe more than 20 times. It doesn’t work.”

While Radrizzani was speaking, the EFL confirmed Sky’s latest selection of live games, including Leeds’ home game against Reading on November 27. Clubs chosen for TV also get a facility fee of about £100,000.

In a statement, an EFL spokesman said the Championship “remains one of the most competitive and unpredictable divisions in world football”, with attendances and revenues that beat many top divisions across Europe.

He also pointed out that the clubs promoted to the Premier League in 2016-17 all stayed up last season, while those relegated did not bounce back.

On the Sky deal, he said: “The income received is only set to increase with the latest broadcast agreement (which) represents a 36 per cent year-on-year increase on the previous arrangement, while also providing EFL clubs with greater flexibility to generate additional incomes through the provision of domestic and international streaming platforms.”

But speculation about the second tier’s biggest clubs breaking away from the EFL to negotiate better deals – and not share them with teams further down the pyramid – is not new and Derby owner Mel Morris has been a loud critic of the Sky agreement in recent years.

Radrizzani’s intervention is significant, though, as he is also the chairman of Eleven, the streaming service that has upset many EFL clubs by ignoring the traditional live football blackout between 2.45pm and 5.15pm on Saturdays. Eleven has twice streamed LaLiga games to its British customers at 3pm this season.

Radrizzani told reporters he wanted an “amicable conversation” with the leagues about this but said it was unfair to punish companies who buy the rights legitimately when there are lots of people pirating the rights.

He also said Eleven would continue to stream LaLiga games during the blackout and was in talks with Serie A to do likewise.

Radrizzani was in a similarly bullish mood about Leeds’ chances of promotion under new manager Marcelo Bielsa this season.

“After last year I really wanted to have a manager with strong leadership who would be a catalyst for the entire club. I thought we needed to change the culture and very quickly he has achieved this and I’m very happy,” he said.

“The club is catching up and becoming a modern club. And soon, if not this year, maybe next, it will be ready to go in the right direction and get promotion.”