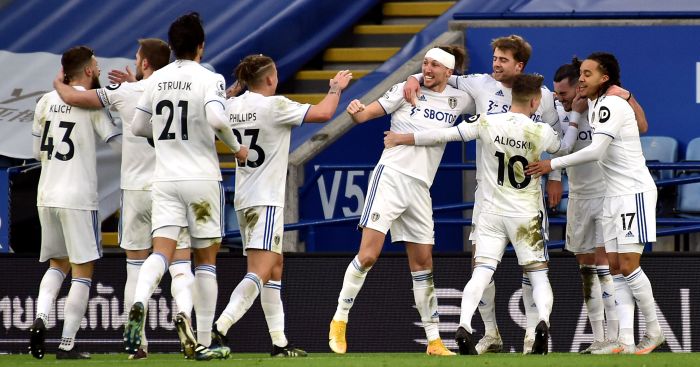 The one thing missing from Leeds’ tremendously enjoyable and entertaining return to the Premier League had been a rousing victory over properly decent opposition. This win at (probably no longer) title-chasing Leicester rights that wrong.

Leeds’ games against the elite have generally been very good and very entertaining, but with Leeds cast as the naive neutral-pleasing entertainers. They’ve given plenty of good teams a really good game, they’ve quite often got spangled, but until now they’d never got over the line for a win.

There are a couple of reasons why this particular victory is even more impressive. For one thing, Leicester were not bad. Not by any means. They were short of their best – inevitably given the absence of Jamie Vardy and Wilfred Ndidi –  but they played perfectly well. Especially in the first half of the second half, when they appeared to be exerting control after replacing Mark Albrighton with Caster Soyuncu to provide some necessary added security. In a thoroughly entertaining first half, Leeds found it far too easy to make their way through an Ndidi-and-Praet-less midfield and create the kind of “basketball match” Brendan Rodgers had specifically spoken about avoiding.

Which brings us to the second point about just how impressive this was from Leeds. They turned one point into three at the precise moment when the Foxes looked to be taking control. Then Patrick Bamford was first set up by the superb Raphinha to lash home and put Leeds in front before unselfishly teeing up Jack Harrison to make it safe as Leicester threw men forward. Bamford’s composure and selflessness were admirable; however obvious the decision looked we’ve all seen that kind of position butchered.

A 3-1 win at a team unbeaten in their previous seven games and looking to go second in the table. That’ll do.

Leeds also achieved what 10 teams previously this season had been unable to: take even one point – never mind all three – off Leicester after falling behind.

The visitors’ response to Leicester’s opening goal was spectacular. Leicester were value for their early lead when Harvey Barnes surged forward in that increasingly trademark way of his before playing a one-two with James Maddison and finishing with composure. No sooner had the thought occurred that here were the two men Leicester would look to in the absence of Vardy combining to such great effect than Leeds were level.

It was Maddison who gave the ball away this time to set Leeds on the counter-attack as Luke Ayling picked off the loose pass and set off. Fed Bamford – who in the end has had an absolute Harry Kane of a day – who played it in for Stuart Dallas to go across Kasper Schmeichel into the bottom corner.

Leeds were much the better side for the remainder of that first half, with Schmeichel the only reason Leicester went in level. As the game appeared to be moving back towards Rodgers’ men, Leeds came again.

Bamford will understandably take the individual plaudits for his superbly taken goal and pair of assists, but this was a pure team performance. A brilliant afternoon for Leeds, as they finally found that sweet spot that has eluded them previously against the best this division has to offer. Clinical and composed while losing nothing on the entertainment side. More of this, please, football.