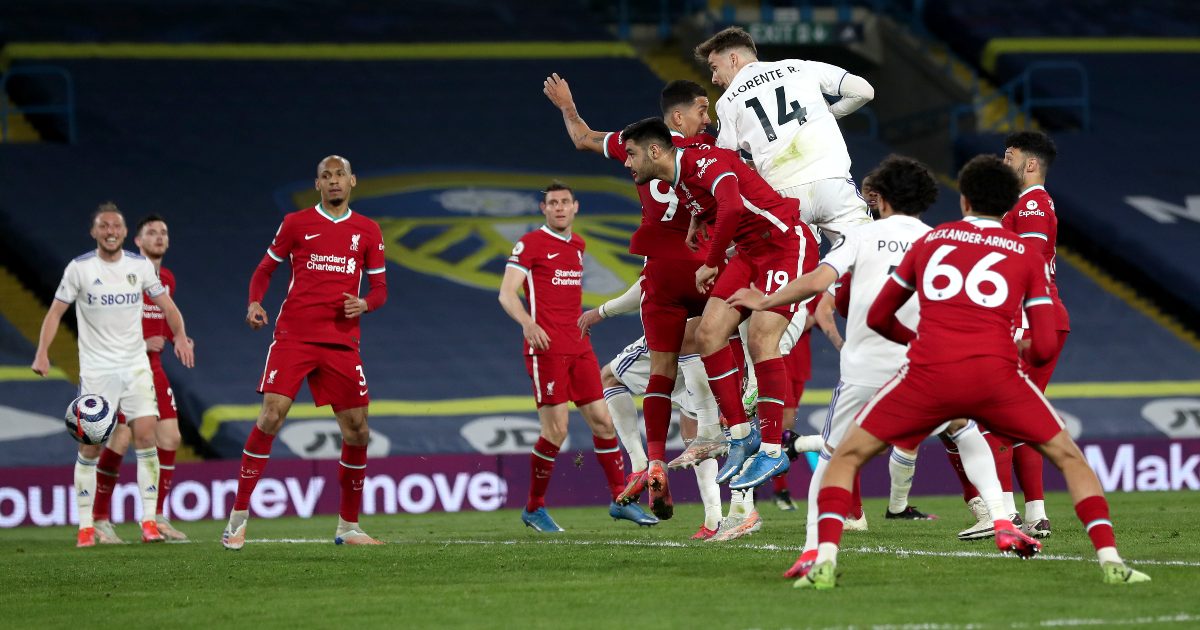 Diego Llorente headed in a deserved equaliser for Leeds United in the 87th minute to frustrate Liverpool.

Llorente, an £18million summer signing from Real Sociedad, registered his first goal for Leeds to deny Jurgen Klopp’s side the win that would have lifted them back into the top four.

OPINION: Klopp forgoes chance to be Churchill in war on ESL

Where Jurgen Klopp’s side will finish this season and what it will mean is anyone’s guess after the European Super League dropped its bombshell on Sunday.

But, as it stands, Liverpool’s Champions League hopes were dealt another blow.

Several hundred fans, including some Liverpool supporters, gathered outside Elland Road before kick-off in protest at the Super League proposals.

Leeds owner Andrea Radrizzani had made clear his dismay at the plans earlier in the day on social media and his club’s players made a clear statement in the warm-up as they wore t-shirts with ‘Football is for the Fans’ written on the back.

Liverpool appeared to have put last week’s Champions League exit behind them as they swarmed all over Leeds in the opening exchanges.

Thiago Alcantara’s swerving drive was tipped over the crossbar by Illan Meslier, Roberto Firmino threatened after cutting inside and Diogo Jota’s close-range effort was blocked.

Leeds chased and harried with the usual intensity and created their first real chance in the 24th minute when Kalvin Phillips’ lovely weighted pass sent Patrick Bamford clear on goal, but Alisson produced a crucial block.

But Liverpool carried the greater threat and were rewarded with the opening goal in the 31st minute.

Trent Alexander-Arnold charged in behind on to Jota’s superb throughball and squared the ball for Mane to side-foot home his 13th goal of the season in all competitions and his first in the Premier League since January 28.

Tyler Roberts’ low shot was comfortably gathered by Alisson as the visitors preserved their slender lead at half-time.

Firmino was denied by Meslier’s near-post save at the start of the second period and Jota headed narrowly over from the subsequent corner.

Klopp’s side continued to make Leeds run hard in their bid to recover the ball, but as the visitors’ energy levels dipped, the home side stepped up their pursuit of an equaliser.

Alexander-Arnold escaped a penalty appeal against him after the ball appeared to hit his lower arm and Helder Costa failed to keep his far-post volley on target.

Roberts and Harrison combined brilliantly in the box, but Alisson saved with his legs.

But Llorente rose highest to send a thumping header from Harrison’s corner into the roof of the net to equalise in the 87th minute.

Liverpool almost snatched a winner in time added on, but substitute Alex Oxlade-Chamberlain could not get a clean shot away and Meslier comfortably gathered.