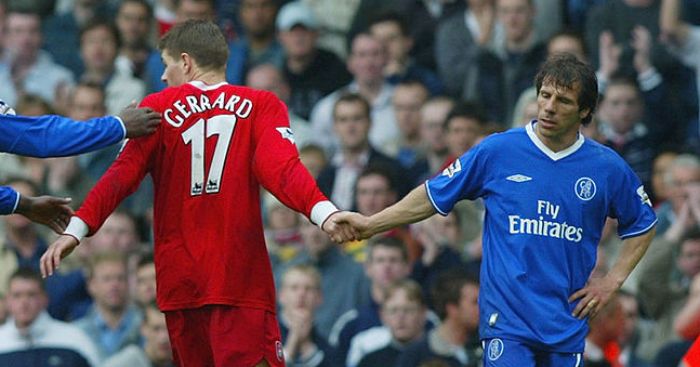 Steven Gerrard
Were it any other player – and perhaps any other club – there would be no such conversation. But this is Steven Gerrard, the greatest to have played in the Premier League without ever winning it, and Liverpool, where this perennially means more.

So the club’s chief executive must be asked about the prospect of employing someone else’s manager on a short-term playing contract to ride on the coat-tails of another team’s success. Forget the impact it would have on the existing squad, the mockery it would make of the achievement and the fact Gerrard himself would find it embarrassing, because this story needs a Hollywood ending.

But there will be days the 39-year-old looks upon a medal collection containing a Champions League, two FA Cups, three League Cups – many of which he single-handedly won – with a brief degree of remorse. There will be moments he contemplates whether he would swap his menagerie of personal awards to upgrade one of his three runner-up finishes. There have been times when he regretted leaving Liverpool a few months before Jurgen Klopp’s arrival. The club’s most iconic modern player and manager were like ships passing in the night.

Gianfranco Zola
The entire course of Chelsea history changed drastically in the summer of 2003. Victory on the final day of the season against Liverpool in a game the media rather undervalued by referencing ‘the £20m match’ persuaded Roman Abramovich to invest when the club were on the brink of financial ruin. And Enrique de Lucas’s departure sent shockwaves through Stamford Bridge that the supporters might never recover from.

Some little fella called Gianfranco Zola also left. A player summarily dismissed as past his prime when he joined Chelsea in November 1996 at the age of 30 proceeded to serve lashings of humble pie, each with a smile, a flick and a moment of inimitable genius.

But that Zola missed out on Chelsea’s era of dominance and trophy stockpiling – after playing a key role in laying the groundwork – remains a cruel joke. He saved his highest goalscoring campaign until last to inspire Chelsea to that crucial fourth place, but admitted that his contract expiration “happened at a bad, bad moment” for a club in takeover talks.

“Chelsea made me a better offer on July 2, when the transaction between the old owners and the new owners happened,” he said, reluctant to renege on a deal he had already agreed with Cagliari. But he parted with a warning: “I don’t know whether money is always a good thing. I remember when money poured in to clubs in Italy and they got nowhere.” He needn’t have worried.

Paul Merson
“Arsenal will win the league because they have got the best players,” said Merson in August 2003. “If they keep their best players and they all remain fit week-in week-out then they will not be beaten.” And so it came to pass, as the Gunners secured a third Premier League title in six years with an Invincible season.

Merson had chosen to leave before that first triumph in 1998. Arsenal had just finished third and the 29-year-old was offered a new two-year contract. He rejected it in favour of joining relegated Middlesbrough on a longer deal for, he would later claim, more money than Dennis Bergkamp was earning in north London.

By the time Arsenal were lifting the crown in 2004, Merson was one of a quartet of the club’s 50 greatest stars still playing outside of Highbury. David Seaman (7th) and Nicolas Anelka (29th) were plying their trade at Premier League Manchester City, with Emmanuel Petit (22nd) competing against them for Chelsea. Marc Overmars (12th) was winding down at Barcelona. Merson? He was suffering relegation from the First Division as player-manager of Walsall. A couple of league championships under the previous regime is far more than a mere consolation prize but it must have stung watching George Graham stalwarts Tony Adams, Lee Dixon, Ray Parlour, Nigel Winterburn, Steve Bould, Ian Wright and Seaman add to their haul during Arsenal’s transformation.

Steve Fletcher
There is something quaint about Fletcher’s reference to playing in the Championship as “the one thing that’s eluded me throughout my career” in his retirement announcement upon Bournemouth’s promotion to the second tier in 2013. It betrays an understandable belief that the Cherries had reached their apex when, in actual fact, the Premier League was on the horizon.

Fletcher was long a member of the club’s backroom staff by then. After three separate spells at Bournemouth, covering 728 games, 18 seasons, three different decades, three promotions, one relegation and a couple of close calls, the 40-year-old was “sensible” and “realistic” in making “the hardest decision of my life” by calling time on his career. Two years later, Eddie Howe had unfathomably guided them to the top flight with record appearance-maker Fletcher in charge of recruitment.

Paul McGrath
While many, including Sir Alex Ferguson himself, will cite the sale of Jaap Stam as the manager’s biggest mistake, his ousting of Norman Whiteside and Paul McGrath in the same summer was perhaps the riskiest decision of his career. Manchester United had just finished 11th in the First Division yet, within the same month, two players popular in the dressing room and with fans had left for a combined fee of little over £1m.

Whiteside joined Everton but retired two years later due to a knee injury. McGrath battled his own such knee demons, as well as an altogether more damaging alcohol addiction, yet played on for almost another decade. The centre-half won two League Cups with Aston Villa, was named in the first PFA Premier League team of the year and featured in two World Cups after leaving Old Trafford.

But Ferguson was largely vindicated. McGrath was given a minder and a significantly reduced training schedule by Graham Taylor, the sort of concessions the United manager did not feel he could provide. Instead of accommodating a haunted genius he signed Gary Pallister from Middlesbrough, one of the final pieces of his dynastic puzzle.

By the time McGrath retired in 1998, United had won four Premier League titles and three FA Cups without him. In seven years under first Ron Atkinson then Ferguson, the defender won a solitary FA Cup. As Bryan Robson once said: “What the manager proved by selling Norman and Big Paul was that he would take the tough decisions, no matter how big or popular the player. He knows that you cannot allow cracks to develop and affect a dressing room.”

David Nugent
‘Legend’ might be too grandiose a term for a player who stayed for little more than four years. But Nugent is one of a number of supporting cast members without whom Leicester could never have broken football.

It is an honour he shares with Esteban Cambiasso, James Pearson and Marcus Rashford. That Leicester were even in a position to gatecrash the VIP area owes a great deal to an invitation from Nugent himself.

Across three Championship seasons, the England international scored 49 goals. He was their top scorer in each campaign, culminating in the 20 goals that carried them to the Championship title in 2014.

But some players are simply not designed for the top flight. Nugent started 16 games and scored five goals in the Premier League, leaving for Middlesbrough in August 2015 to inspire another promotion. Nugent led the Foxes to water but it was Jamie Vardy who had them drinking port and Skittles vodka.