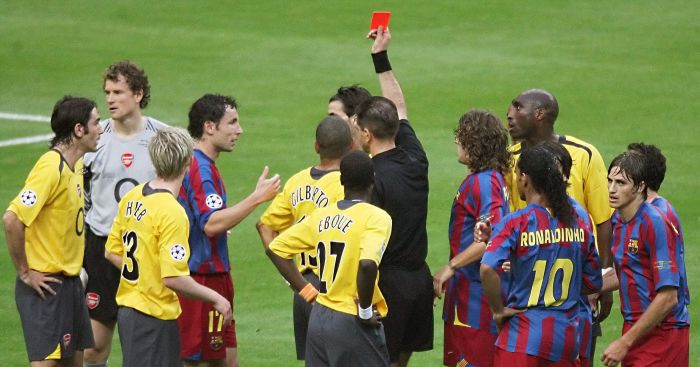 Jens Lehmann has opened up about the feelings he experienced when he was sent off for Arsenal in the 2006 Champions League final.

The goalkeeper only lasted 18 minutes on the pitch in against Barcelona in Paris after wiping out Samuel Eto’o, who was through on goal.

Ludovic Giuly did score when the ball ran loose but the referee on the night decided to bring it back for a foul and show Lehmann the red card.

Second-half goals from Eto’o and Juliano Belletti cancelled out Sol Campbell’s opener to win the match for Barca.

“After a few minutes, Thierry Henry had the first great chance, followed by two Spanish attempts on target which I could parry safely,” Lehmann wrote in his new autobiography ‘The Madness is on the Pitch’.

“Following the dismissal, I slunk into the dressing room to put on a clean shirt. What was I to do now? For a few minutes, I sat around, irresolute, before climbing up the steps to the stands.

“I bumped into Sir Alex Ferguson, who stared at me wide-eyed, as if he had seen Lucifer himself. ‘Bad luck,’ I said with a shrug, continuing on my way.

“When I had eventually found a seat, I was joined by Lasse and Mats [his children], who had been sitting with my wife and brother. I pulled them onto my lap and finally began to tear up.

“There is no apt description nor any solace for this moment, in which all aims, hopes and ambition of the previous months disappear in a black hole of disappointment.

“I suspected I would never again be part of a Champions League final but did not let the thought get to me at all.”