Home All The News Leicester 1-0 Porto: Skittle vodkas all round 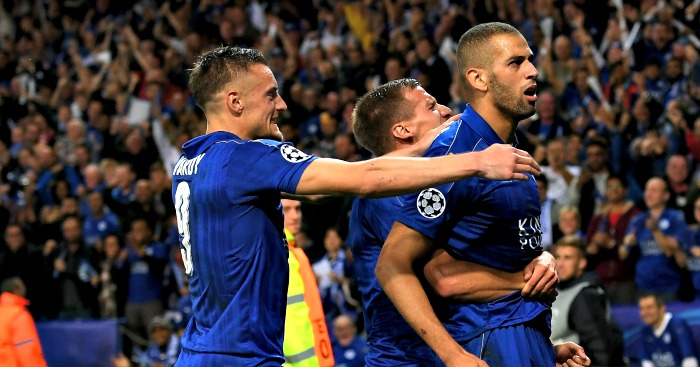 Islam Slimani scored the only goal of the game as Leicester beat Porto 1-0 on their home debut in the Champions League.

Striker Slimani, labelled the Dragon Slayer after his run of goals against Porto, bagged his sixth goal of 2016 against them.

He had netted five in three games for previous club Sporting Lisbon against Porto before his £29million deadline-day move to Leicester, and grabbed the winner against the Dragons as the Foxes hosted a Champions League game for the first time.

It left Leicester two points clear at the top of the table as they made it successive Champions League wins following their opening victory at Club Brugge.

Jesus Corona hit the post late on for Porto as the Foxes rode out late pressure and Copenhagen’s 4-0 win over Brugge allowed the pair breathing space over their beaten rivals.

Defeat also continued Porto’s wretched run of results in England and they have now failed to win in 17 attempts.

Porto, now third in the group with one point, offered little apart from their late rally and Claudio Ranieri’s side should be increasingly confident of reaching the knock-out stages.

The Italian recalled Kasper Schmeichel after he missed three games through injury and the goalkeeper was almost embarrassed by Andre Silva’s lob in the opening minutes.

Porto showed more composure and threat than the Club Brugge side Leicester brushed aside 3-0 in their opening game but that soon evaporated as the Foxes grew into the game.

Jamie Vardy and Riyad Mahrez began to irritate the visitors’ defence while Slimani’s scoring history against them was obvious and it was the Foxes’ record signing who netted the winner on 25 minutes after combining with Algeria team-mate Mahrez.

The winger teased an opening on the right and he swung in a delicious delivery which begged for the finishing touch and Slimani delivered, powering in a header from three yards.

After haunting Porto in the Primeira Liga there was little sign of the 28-year-old stopping and the visitors quickly ran out of ideas.

The only fear for Leicester was the temperament of Turkish referee Cuneyt Cakir, who had issued four yellow cards with varying degrees of consistency.

He promptly booked Danilo and Huth in the opening 10 minutes of the second half as Alex Telles planted a free-kick over following Huth’s shove on Silva.

The Foxes continued in a degree of comfort though and Mahrez had Iker Casillas scrambling to save his low 59th-minute effort.

Schmeichel had been given an easy ride by listless Porto but needed to be alert with 18 minutes left to gather Diogo Jota’s shot after it hit Morgan.

The Denmark international came for, and missed, a cross and the ball fell for Corona who lashed a 15-yard volley against the post but Leicester survived.