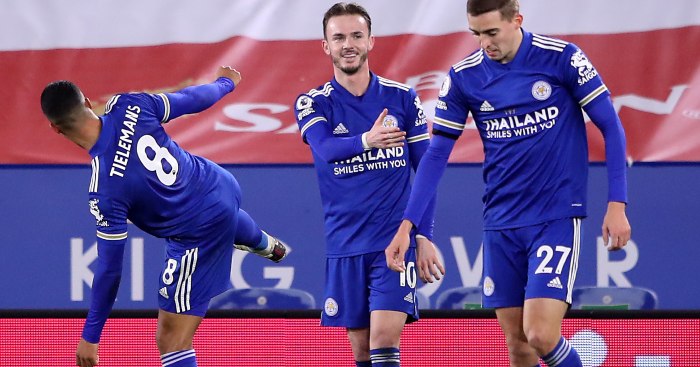 James Maddison and Harvey Barnes strikes sent Leicester second in the Premier League as Brendan Rodgers’ side edged out victory against absentee-hit Southampton.

The high-flying teams played out an entertaining encounter at an impressive tempo in front of empty stands at the King Power Stadium on Saturday.

Leicester had not beaten Southampton on home soil since 2016 but Maddison’s fierce strike helped them end that frustrating run, with Barnes scoring in stoppage time to wrap up a 2-0 win against Ralph Hasenhutt’s men.

Saints were without the likes of Danny Ings, Oriol Romeu and Jannik Vestergaard on Saturday evening but started on the front foot, impressing in and out of possession against the flustered Foxes.

But Leicester cranked up the pressure towards half-time and went ahead in the 37th minute as Maddison rolled Jack Stephens and lashed past Alex McCarthy in front of watching England boss Gareth Southgate.

Kasper Schmeichel pulled off some important saves on his 400th Leicester appearance and Stuart Armstrong rattled the crossbar in a helter-skelter second period.

Jamie Vardy somehow failed to puncture growing tension against Southampton, who were caught out at the death by Barnes.

Leicester will have been relieved to see out victory on a night when they were under pressure from the outset.

Che Adams was proving a handful and raced through from the halfway line, only for his clipped cross to be cut out having kept his cool under pressure from Jonny Evans.

What a finish from James Maddison 👏

He smashes it into the roof of the net to put Leicester in the lead and follows it up with some socially distant celebrations! pic.twitter.com/7QCQ42RvWB

Leicester were struggling to get a foothold on proceedings but looked ready to pounce if given a sniff.

Vardy was lurking on the shoulder of a Saints defence and the striker smartly stepped over a drilled cross, allowing Barnes to get away a vicious shot that returning McCarthy denied.

Schmeichel stopped Adams’ thumping effort and Evans producing a superb recovery challenge when the striker linked up well with Theo Walcott as Saints looked for an opener that would come at the other end.

Saints looked to have dealt with an attack that stemmed from an overlooked Wilfred Ndidi foul on Ibrahima Diallo, but the Foxes quickly recycled the ball after an initial cross was dealt with.

Youri Tielemans’ threaded a smart ball through to Maddison, who turned Stephens before hitting a fizzing effort into the roof of the net from an acute angle that beat McCarthy at his near post. The midfielder handed out pretend handshakes in celebration.

Ryan Bertrand forced Schmeichel into an unorthodox stop as Saints looked to hit back immediately, with the Leicester goalkeeper again doing well to punch away a Will Smallbone effort in the early stages of the second half.

The home side were soon raging at referee Stuart Attwell soon after an already-booked Diallo got away with hauling back Maddison.

Smallbone was forced off with a knee issue shortly after and Vardy directed a header over as the match entered the final 30 minutes, with the veteran lifting over an audacious effort before nodding off target.

Southampton looked to be running out of gas but went close to a 73rd-minute leveller, with Armstrong wriggling free and unleashing a 25-yard shot that came back off the bar.

Evans pushed Shane Long as the substitute waited to head home the loose ball but the offside flag saved the defender’s blushes as a penalty would surely have been awarded.

Jan Bednarek cleared a Barnes cross-shot off the line and James Ward-Prowse fluffed his line as the frantic pattern of play continued.

McCarthy denied Vardy from close range late on but the impressive Saints goalkeeper would be beaten again in stoppage time.

The visitors were caught out pushing for an equaliser, with Barnes allowed through one-on-one and duly beating McCarthy.