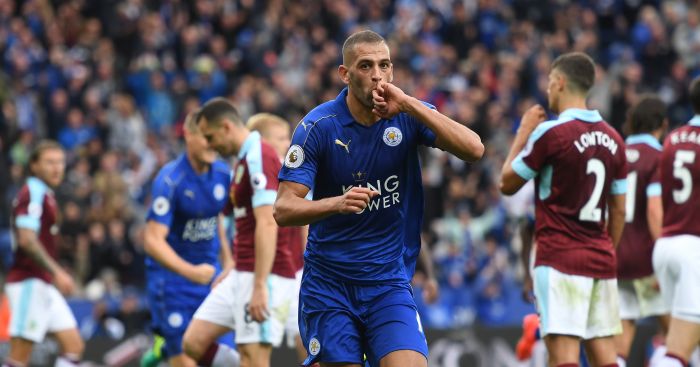 The Algeria striker scored either side of the break to clinch a 3-0 win and seal a wonderful week after the Foxes’ debut Champions League victory at Club Brugge.

Ben Mee’s own goal wrapped up the win for the Foxes who played with the swagger which saw them romp to the title last season.

Slimani, a £29million signing from Sporting Lisbon, added the brute force to international team-mate Riyad Mahrez’s trickery as the pair put Burnley to the sword.

The Clarets fell asleep to allow Slimani to score before and after the break and Steven Defour wasted their best chance in the first half.

The Foxes were coming off the back of Wednesday’s historic 3-0 win at Club Brugge and manager Claudio Ranieri had warned his side their European success could not be used as an excuse for a poor performance against the Clarets.

Heeding his words, the Foxes began brightly as Daniel Amartey planted a volley well over and Jamie Vardy miscued a header with Burnley pinned back at the King Power Stadium.

The Clarets have not beaten Leicester in six years and Jeff Hendrick, making his full debut after a move from Derby, did not look like bucking that trend when he dragged wide after 19 minutes.

The Foxes were comfortable with goalkeeper Ron-Robert Zieler, in for Kasper Schmeichel who was out with concussion, untroubled.

As expected, Burnley posed more of a threat than meek Club Brugge but they relied on Tom Heaton to keep them level after 25 minutes.

Riyad Mahrez, who scored twice against Brugge, tricked his way past Mee and Heaton needed to be alert at his near post to save.

But the Clarets should have opened the scoring after 37 minutes when Defour missed a fine chance.

George Boyd’s deep cross found Scott Arfield and he nodded the ball back to the unmarked Defour who could only head straight at Zieler from five yards.

Mahrez, back on form after a slow start to the season, then should have made him pay but managed to plant a six-yard header wide after a instant Leicester break.

Heaton then gathered Slimani’s 20-yard effort as the tempo finally picked up before the break and debutant Slimani finally the breakthrough in first-half stoppage time.

Albrighton was brought down on the left and when Christian Fuchs swung in the free kick Slimani powered in a header from six yards.

With the lead Leicester relaxed and within three minutes of the re-start Slimani made it 2-0.

Mahrez was the instigator as he jinked his way into the area and Vardy got a touch on his cross to deflect it up to Slimani who nodded in the simplest of headers from five yards.

Albrighton fired at Heaton as Leicester looked to end the contest as Burnley, shellshocked, barely mustered a response and Sean Dyche threw on Sam Vokes for Defour searching for a reaction.

The change had little effect and Mahrez and Fuchs came closest to adding to Leicester’s lead from the edge of the area.

Victory was then wrapped up with 13 minutes left when Mahrez, again, left Burnley bamboozled and his cross was turned in by Mee at the near post.

Johann Berg Gudmundsson’s deflected free kick was later well saved by Zieler but the result was never in doubt.