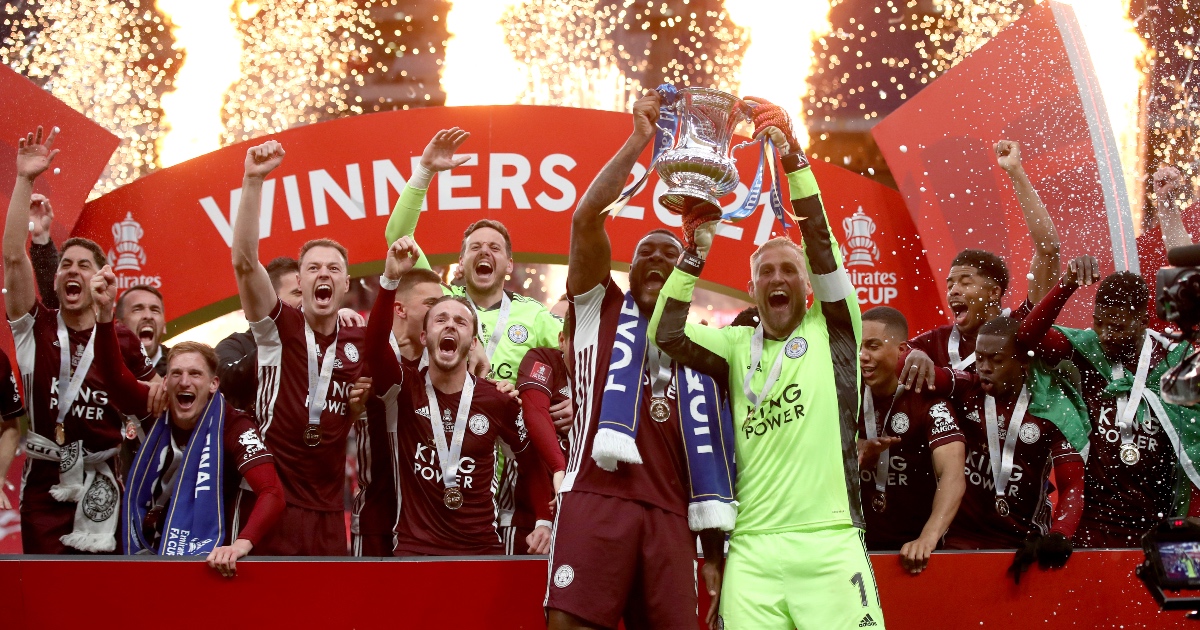 The Belgium midfielder rifled an unstoppable effort into the top corner from 25 yards, as Brendan Rodgers’ Foxes put another genuine stamp on years of recent quality.

Former Leicester full-back Ben Chilwell saw a last-gasp Chelsea effort ruled out for offside after a video assistant referee review, while Kasper Schmeichel earlier made a superb save to deny Mason Mount.

Leicester’s Premier League title win of 2015/16 might have come against all possible odds, but the East Midlands men have never since wilted.

The Foxes were contesting just their first FA Cup final since 1969, when the Beatles were number one with Get Back and Neil Young’s goal sunk the hopeful Foxes – and an eight-year-old Gary Lineker cried all the way home on the train.

The only tears of Leicester blue this time out were of joy and relief however, as Rodgers’ men capitalised on Chelsea’s toothless final-third play.

Chelsea’s second FA Cup final defeat in as many years will now put a major squeeze on the end of the Blues’ season.

The Champions League final against Premier League winners Manchester City on May 29 in Portugal must now seem an age away for Tuchel and his luckless Blues.

And for the likes of Mason Mount and Reece James, two FA Cup final losses in succession will be a bitter pill after such a resurgent second-half to this campaign.

A number of fans booed the players for taking the knee before kick-off, though the anti-racism gesture also received warm applause.

Timo Werner raced in behind the Leicester defence almost at will in a first half where the Blues dominated but failed to make any of their raids count.

James produced an expert block to thwart Jamie Vardy in the area, after Timothy Castagne had outstripped Marcos Alonso down the right.

Caglar Soyuncu twice nodded over as the Foxes pressed their claims too however.

Werner blasted high and wide from distance after fine work from Jorginho and the ever-excellent N’Golo Kante.

And then captain Cesar Azpilicueta went close but failed to connect with an attempted header with the goal at his mercy. Thiago Silva’s teasing cross only required the finest of touches, but Azpilicueta could not adjust quickly enough at the far post after the faintest of flicks from Werner.

Jonny Evans then trudged out of the match just past the half-hour, with his troublesome heel injury again flaring up and Marc Albrighton joining the fray.

Vardy found time to flick a speculative header wide after Tielemans’ ball over the top.

But despite Kante stealing the ball in the Leicester area to tee up another period of Chelsea pressure, a cagey affair reached half-time without score.

Chelsea again dominated when the action resumed, but again the Blues had nothing whatsoever in the way of killer instinct.

Alonso headed straight at Schmeichel and with no power from a Kante cross, while Azpilicueta miscued a centre of his own, straight to the untroubled Foxes keeper.

And just when Tuchel must have been preparing a clutch of changes, up stepped Tielemans with a piledriver strike.

Ayoze Perez cut out James’ hopeful ball out of defence and Luke Thomas immediately threaded through to the unmarked Tielemans. The Belgium midfielder strode forward and as the space opened up he lashed the ball into the top corner.

The lucky Leicester fans inside Wembley rightly leapt into delirium, to toast a strike of the highest quality.

Tuchel immediately unloaded his bench in a bid to turn the tide, with Chilwell’s header forcing a smart save from Schmeichel.

Schmeichel came to Leicester’s rescue again at the death, when the sharp-witted stopper tipped away a rasping effort from Mount.

Chilwell thought he had rescued an equaliser against his former club, only to see his bundled effort ruled out for offside by a VAR review.