Home F365 Says Leicester gatecrashers could stay for breakfast and beyond… 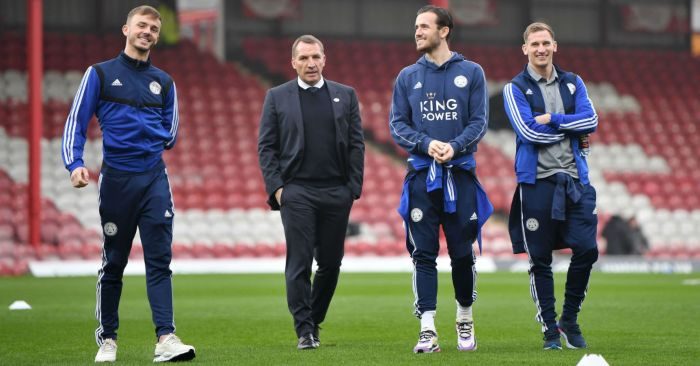 “We don’t want too many Leicester Citys.”

It was one hell of a quote to open one hell of an article from Miguel Delaney, who details exactly how Europe’s super-clubs have drawn up the drawbridge to leave modern football, so the headline goes, ‘broken beyond repair’. He paints a bleak picture of a sport which is now so dominated by the haves that the relative have-nots are left irretrievably on the outside, their assets picked off as they stare up at a ceiling now made of the finest crystal.

That opening quote was attributed to a ‘senior figure from the Premier League’s ‘big six’ clubs’. The particular club is not named but it would be fascinating to know if that senior figure represented one of the three or four English super-clubs likely to miss out on the Champions League this season. In that scenario, they may well be left cursing Leicester again. And this time, there has been no perfect storm – almost impossible to recreate – leading to a thunderous title victory, but a sunny spell forecast almost a year ago when Brendan Rodgers took over a Foxes squad boasting the perfect combination of youth and title-winning experience. And this time the weather could hold in Leicester.

That feted fairy-tale victory of 2016 was actually elite football’s nightmare and there was clearly a collective vow to never allow that to happen again; during that bizarre season and the months following, four of the big six managers were upgraded, with only north London escaping the cull. Incoming bosses Antonio Conte, Pep Guardiola and Jose Mourinho were all given over £100m to spend and Leicester – who broke their own transfer record three times – began the next season with a mid-table finish feeling inevitable. Since their title victory, they have finished 12th, ninth and ninth; that they now lie in third feels almost as revolutionary as their triumph, given the double locks installed on the closed shop after the looting of 2016.

Leicester have undoubtedly been helped by Manchester United, Chelsea and Arsenal collectively deciding that DNA is somehow more important than managerial expertise, while Tottenham’s defiance of the odds always had a shelf life, but this is no wily old nag taking advantage of a few fallers; this is an expertly built squad now being led by an astute and ambitious manager. This season has been so impressive that their trick of getting stronger after the sale of their most valuable asset actually looks repeatable. James Maddison could follow Harry Maguire out of the King Power this summer and you would back them to find a solution.

Eight of their first-choice starting XI are between the ages of 22 and 26; the other three are title winners. Ten of their first-choice starting XI (we’re counting Ayoze Perez as the possible outlier) are either Academy graduates or are worth (in some cases considerably) more than Leicester paid for their services. Beneath that XI, there are other young players ripe for development or profit like Dennis Praet, Hamza Choudhury, Demarai Gray, Kelechi Iheanacho and James Justin. Add another smattering of title winners and this becomes a ridiculously balanced squad. Their success feels sustainable. This time, the gate-crashers could be informing the council of a change of address.

Looking at the financial tables puts this scenario into perspective. Leicester are not just outside of Delaney’s list of the 11 European super-clubs, but outside of Deloitte’s top 20 Money League. According to their numbers, Leicester can boast only the ninth highest revenues in the Premier League, below Everton and West Ham as well as the big six, with barely more than a quarter of Manchester United’s money-generating capacity. In a season when Liverpool have been extraordinary, Sheffield United astonishing and Wolves still threaten to join them in smashing down the doors of the elite, it is easy to forget that Leicester absolutely should not be in third and cradling a ten-point gap to fifth. It defies all logic in a modern football world that doesn’t want too many Leicester Citys.