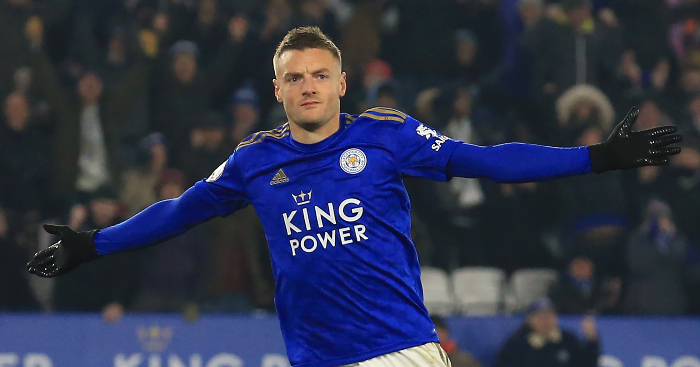 Leicester boss Brendan Rodgers does not think Jamie Vardy has one eye on his own Premier League goalscoring streak after the striker edged nearer the milestone on Wednesday night.

Vardy’s second-half penalty saw him on the score sheet for the seventh match in a row as Rodgers’ team simultaneously equalled a club record of seven straight wins in the top flight dating back to March 1963 with a 2-0 victory against Watford.

During Leicester’s title-winning season of 2015/16, Vardy scored in 11 consecutive Premier League matches. Should he maintain his form, he would equal those figures in Boxing Day’s blockbuster clash at home to leaders Liverpool.

However, Rodgers does not believe it is on the 32-year-old’s mind just yet.

“For me, I’m not really bothered who scores as long as we win and play well, but Jamie is a real talisman and a fantastic striker and in that moment he has all the composure to score the penalty so he is very important for us.

“But Jamie is like ourselves, he is only worried about the next game. We will reflect on this over the next couple of days but then we will move on to Aston Villa on Sunday.

“It was a fantastic win for us. We have played better this season but the mentality to keep going right until the end once more was very pleasing. To keep another clean sheet is equally important.”

Vardy’s goal came after a VAR decision confirmed that a penalty should be awarded after Watford defender Adam Masina shoved his hand in the face of Jonny Evans as a cross came into the area, with the home centre-half falling to the ground.

In the first half, Vardy harshly received a yellow card after a VAR check decided that Adrian Mariappa’s challenge on him should not be a spot kick.

On the decisions Rodgers said: “I thought the first one was a penalty and to not get it was disappointing, but you get on with it. The second one was a hand in the face and it was a great finish by Jamie.”