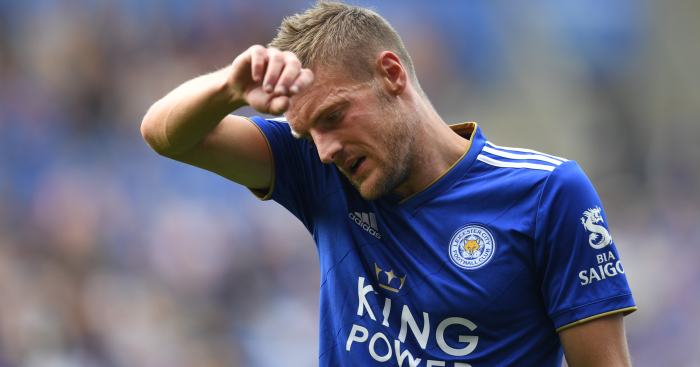 Leicester boss Claude Puel has warned Jamie Vardy he is not guaranteed to walk back into the team.

The England striker starts a three-game ban when the Foxes head to Southampton on Saturday.

He was sent off in last week’s 2-0 win over Wolves and Kelechi Iheanacho, Demarai Gray and Shinji Okazaki are now on stand-by to replace him.

Puel is prepared to give the trio a shot of keeping Vardy out of the side.

He said: “He’s a valuable player for us but we cannot play all the season with one striker with the possibility to score.

“It’s a good chance to give responsibility to other players, for example I was happy with the progress of Iheanacho at the end of last season.

“We have lost Jamie for three games but it will be a good chance to give responsibility to other players, they have good maturity to take their place in the team.

“We need to have players to take the place because it will be a long season. We have Jamie but if something arrives without the possibility to use Jamie it’s important the players have the desire to take his place.”

It was only Vardy’s third red card in six years at Leicester and he will also miss Tuesday’s Carabao Cup game against former club Fleetwood and next Saturday’s visit of Liverpool.

Puel, though, does not want to curb the 31-year-old’s competitive nature on the pitch.

“I cannot get angry with Jamie, he gives his best with a good spirit and brings a good attitude,” he said.

“Last week he was not a saint so he cannot play against the Saints but I hope he can progress in training and maintain a good level. It will be four weeks without playing and a pre-season.

“It’s important to keep his fighting spirit because it’s the most important thing for him.

“Perhaps last week it was too much but we don’t want to change Jamie. I want him to continue like this.”