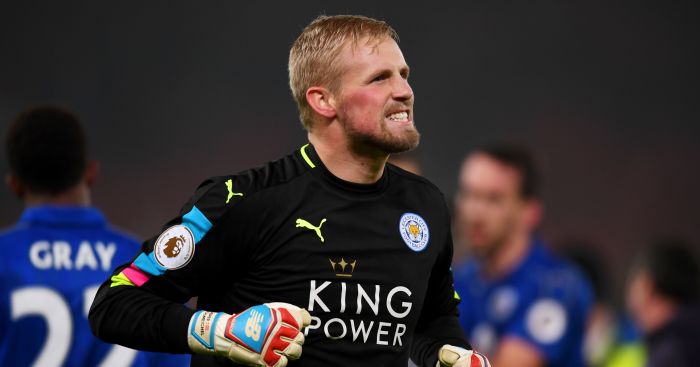 The goalkeeper has been linked with a move from the King Power Stadium now they cannot offer Champions League football next season.

Manchester United have been tipped to make a move for the 30-year-old with Real Madrid expected to revive their interest in Spain international David De Gea.

“I do, I think he’s in the form of his life. He’s entitled to change his agent if the other agent is out of contract,” he said.

“He has been very professional and his level of performance has shown that. Nothing has affected him, with the type of character he is – and he’s a very strong character – I expect him to carry on the way he’s performed.

“I’m not aware of any interest. I’ve said before I have no problems with the players wanting to progress and play in the Champions League – which we have offered this season.

“But ultimately Kasper is happy here, you can see that in the way he conducts himself. He’s in the form of his life and we have to cross that bridge (an offer) when we come to it. We’ve had no offers.

“He’s under a long-term contract with us and as far as I’m aware he’s perfectly happy. We don’t need to sell.”

This term he has kept seven clean sheets in the top flight ahead of Saturday’s visit of Watford with just four games left.

Leicester are 11th in the table after ending their five-game winless run with last weekend’s 1-0 victory at West Brom.

Captain Wes Morgan is out of the game against the Hornets as he continues to battle a hamstring injury but is expected to return to training next week.