Home F365 Says Leicester is more: has the tide finally turned for Foxes? 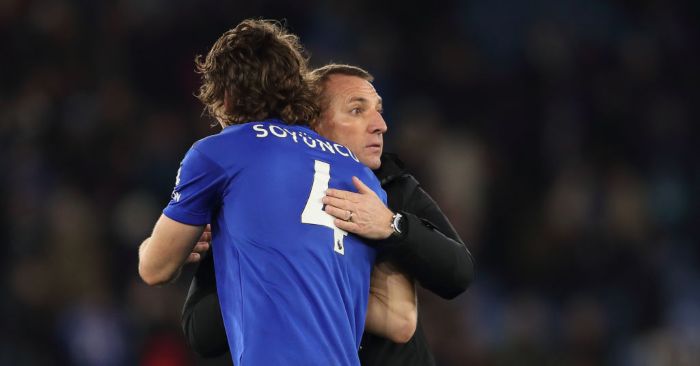 Leicester show that Liverpool are not the only side that have become victims of their own success.

Brendan Rodgers is both the best and worst manager. That has never been dependent on a shift in his approach or tactics, but a change in circumstances and situation.

An arm around the shoulder. A reference to “outstanding character”. A general air, not necessarily of superiority, but of someone who has at least three different quotes from How To Win Friends And Influence People framed and signed by himself, hung up around his house next to various self-portraits. It can either be the first or the last thing a player needs.

For a team in form, he is a sort of life force: a stimulus that encaptures and emits constant positive energy. It is fascinating to watch them feed off him, and him simultaneously thrive off them.

But that symbiotic relationship can become counter-productive. A side playing poorly needs something different, something more stark. Rodgers might alter his ways behind the scenes and in training, but the public determination to adorn every dark cloud with a silver lining stymies development.

One thing he does know is how to capitalise on a maximised stock. Just over a fortnight after the conclusion of the 2013/14 Premier League season, Rodgers signed a three-year contract extension. He was sacked within 18 months.

Apropos of nothing, Leicester were second at the start of December, having won 11 games, scored 35 goals and conceded nine. They were three points ahead of Manchester City and 12 clear of fifth-placed Wolves.

Then Rodgers was rewarded with a new deal. The Foxes have as many points as Crystal Palace since, winning four of 13 league games and scoring as many as they have conceded (19 each). The gap to fifth has been mercifully reduced to just eight points.

And, really, none among us can claim not to have let ourselves go after a few joyous months of a relationship.

As Leicester prepared to host Birmingham on Wednesday, this was a previously cheerful marriage that only recently drew envious glances from afar. That it had turned ever so slightly sour for some only emphasised that it was not just Liverpool who had become victims of their own success.

A run of five games without a win cannot be painted as anything other than disappointing, of course. Nor a sequence of three games without a goal, a strangely porous defence, an ineffective midfield, an isolated attack and no discernible pattern of play. The absences of Wilfred Ndidi and Jamie Vardy have evidently fractured something that was once wholesome and to be coveted.

But even as the Foxes laboured against their Midlands cousins, it was worth remembering how far Leicester had come. The one-year anniversary of Claude Puel’s sacking has only just passed and they are third in the Premier League, were beaten in one cup semi-final and, courtesy of a late Ricardo Pereira header here, are into the quarters of another.

The first half was not good enough. Four shots with none on target and almost three-quarters of possession was the sterile domination of Rodgers in excelsis. But the improvement after half-time was perceptible. Passes were more crisp, runs were more purposeful. There was a synergy that had been lacking for so long; where 11 random players once stood, a team slowly emerged.

They needed to be patient against a counter-attacking, defensively resolute team on a 13-game unbeaten run. They had to trust they would find a way, even if it inexplicably presented itself through the means of Marc Albrighton’s left boot and the right-back’s head. They had to persevere, to overcome.

It might be meaningless, but it might also reinvigorate a season that, in reverse, would be seen as phenomenal. If Leicester had started slowly but burst into life after Christmas to sit third, the outlook would be wholly positive.

Their only failure has been in meeting new expectations after far exceeding initial ones. In truth, they were never quite as good as beating Southampton 9-0, nor are they as bad as these past few months have suggested.

A regression to the mean was always likely. And perspective shows that mean to be a talented, well-rounded but flawed squad, coached by either a perfect or polarising manager. Rodgers will be in his element once more if the tide has turned back towards Europe. Just don’t give him a new contract.