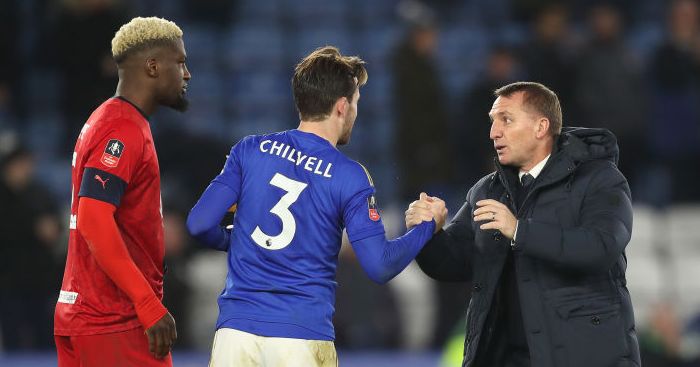 Rodgers left England international defender Chilwell and midfielder Choudhury out of the Foxes squad for the 2-1 defeat at Burnley on Sunday.

Both have now been restored to the squad for Wednesday night’s visit of West Ham to the King Power Stadium.

Addressing the situation, Rodgers said: “It’s something that happens at every club, there are misdemeanours that take place.

“They’re young players, and young players make mistakes. They’re learning that if you want to be at the top end of this table then it’s a real mindset professionally you need to have, and we can’t carry anyone.

“If you want to compete at that very top level, that mindset is so important, in terms of your mentality, your preparation.

“If you are prepared then you’re ready to work hard, which will give you confidence, and then ultimately you can succeed from that.

“They’ve learned their lesson, they are good boys, both of them. We’ve spoken to the two players, and we move on. They weren’t available for the weekend, but now they both are.”

Midfielder Wilfred Ndidi also comes back into the reckoning following a remarkable recovery from a minor knee operation just 11 days ago that has forced him out of the last three matches.

Rodgers initially suggested Ndidi could be sidelined for up to six weeks after having a piece of floating bone removed from the meniscus.

Rodgers said: “There’s a great chance of him being in the squad for tomorrow. We will see how he is from today.

“He’s made an incredible recovery, and that’s the thing with the type of operation he’s had, that people will recover in different time scales. With Wilf, it’s been 11 days.

“He’s been out on the pitch, had all the measures and tests. It’s a testament to him and our medical team, the work that’s gone in to get him fit, that he’s available.

“We’ll give it another period of time to ensure he feels good, he feels right. He wasn’t one we wanted to rush, but over the course of the last couple of days he’s been fantastic.

“He’s been in duels, he’s had the tests. If there had been any effects then it would have taken place over the last few days, but he’s come through it really well.”