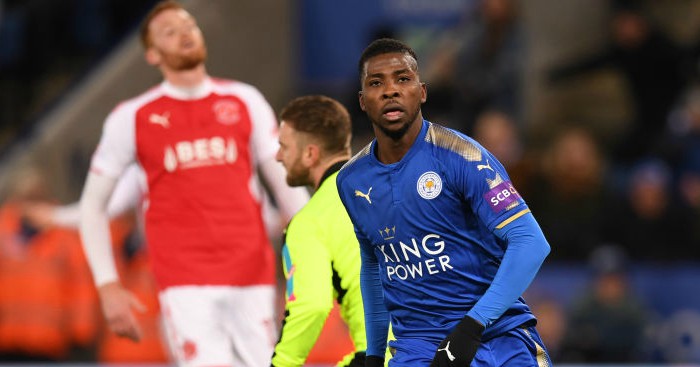 The Video Assistant Referee was required as a brace from Kelechi Iheanacho helped Leicester City to a 2-0 win over Fleetwood Town.

Iheanacho scored in each half but it was his strike 13 minutes from time that required the intervention of the video assistant referee.

Referee Jonathan Moss asked to check if the striker was offside before finishing off Riyah Mehrez’s lovely reverse pass.

Replays showed Iheanacho was onside when the ball was played and the goal stood to see Leicester progress to a fourth-round tie away at Peterborough.

The Foxes made eight changes to the side that started the goalless Premier League draw at Chelsea on Saturday, although Mahrez was retained by manager Claude Puel.

Fleetwood boss Uwe Rosler surprisingly decided to rest leading scorer Devante Cole, with the 12-goal forward only among the substitutes.

As expected, Leicester dominated possession but their passing often lacked the tempo to trouble a well-organised Fleetwood team who were largely able to keep their opponents at arm’s length.

It took until the midway point of the first half for a shot on target but it came from the League One team. Eldin Jakupovic smothered a tame effort from Conor McAleny, who then brought a fine save from the Leicester goalkeeper with a curling effort from the edge of the area.

Mahrez clipped the outside of a post with a free-kick but it was Fleetwood who were looking the most likely to score and Jakupovic was worked again after 37 minutes, getting fingertips on the ball to help a Kyle Dempsey shot over the crossbar.

It was a surprise when Leicester went ahead two minutes before half-time and the goal came from nothing. Christian Fuchs knocked a long pass down the line and the ball broke to Islam Slimani who played in Iheanacho.

A lovely first touch enabled him to run through one-on-one with Chris Neal and he coolly slid his finish beneath the advancing goalkeeper.

It was not only Leicester’s first shot on target of the evening, but the Premier League club’s first of the entire tie including the goalless draw at Highbury 10 days ago.

Slimani might have extended the lead at the start of the second half but he snatched at his chance and put the ball wide.

Iheanacho twice had the ball in the net during the second half. His first effort was rightly ruled out but on the second occasion after 77 minutes, after the flag again went up but Moss consulted with the video assistant referee, it was 2-0 to Leicester.

Jamie Vardy came on as a substitute against his former club with 10 minutes remaining, bringing applause from both sets of supporters as Leicester comfortably saw out the tie.