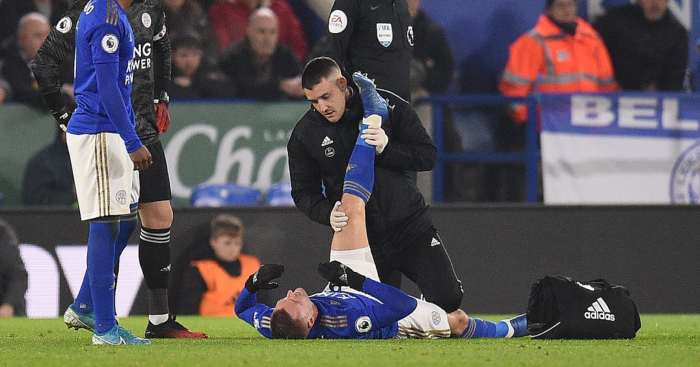 Brendan Rodgers has given a positive update on Jamie Vardy’s injury after he came off in Leicester City’s 4-1 victory over West Ham on Wednesday night.

Ayoze Perez scored twice as Leicester ended their two-match winless run in the Premier League with an emphatic win against West Ham, but the Foxes also lost Vardy to injury.

Vardy limped off just before half-time at the King Power Stadium with his side 1-0 ahead thanks to Harvey Barnes’ 24th-minute opener, with the winger then setting up Ricardo Pereira to fire home the second in added time.

On Vardy’s injury, Rodgers told BBC Sport: “It is not his hamstring which is good. Hopefully over the next couple of days it will ease off and he will be fit.

“Jamie is a real talisman for the team but if we are going to have success it is about the team.

“He hasn’t played for us in a number of games and the team has still played well but of course we want him fit and well. He is such a good player and we hope it is not too serious.”

On Leicester’s performance, Rodgers added: “I thought we were very good this evening.

“I thought we played with that authority in the game and personality that the team has played with all season. Tempo was good, pressed well.”