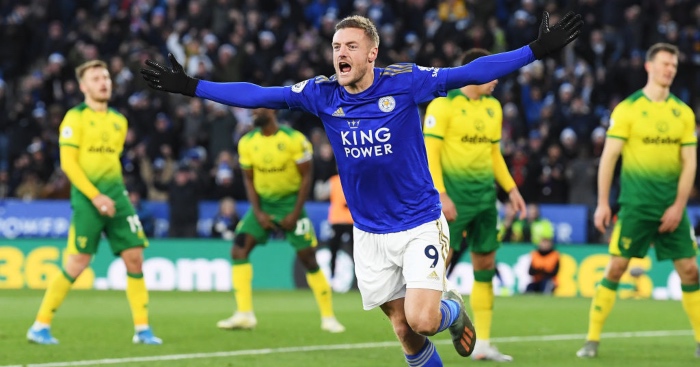 We complete our Old Folks XI with our senior striker. He’s won titles at four different levels of the pyramid, even against odds of more than 4,999-1. Among his goals is one against Atlético Madrid in a Champions League quarter-final. He’s also scored a hat-trick against a team coached by Pep Guardiola, and even netted against Manchester United in a Community Shield. He’s been named Premier League Player of the Year, and there’s also a league record that happens to be all f**king his. He’s played in a World Cup and a European Championship, scoring a vital equaliser in the latter. He’s hard and he’s hectic, he’s fast and he’s furious. As Michael Palin and Coleen Rooney might have said, it’s…

Jamie Vardy’s record in English football is one of the most impressive in recent memory. Since 2010, his league strike rate is 174 in 337 matches, better than one in two. And if it’s partly inflated by two storming non-league seasons, let’s remember he took his team to titles twice, including Fleetwood Town’s first ever promotion to the Football League.

At this point, Vardy’s exploits are as well known as any player’s in the league. But the immortal Leicester City title season has kind of obscured his early years at the club. So it’s our duty to take a closer look.

Vardy joined Leicester from Fleetwood in the summer of 2012, at the age of 25. The Foxes were in their ninth straight year below the top flight, having finished tenth and ninth in the Championship the previous two years. After a slow-ish start, the team hit a hot streak, briefly led the division, and stayed in the play-off spots for most of the season. A late slump threatened to cost them a promotion shot, but a dramatic injury-time winner against Nottingham Forest on the final day took them to sixth place and the play-offs.

Vardy played relatively little role in all of this. He scored a couple of key early goals, then struggled most of the season, kept on the bench by David Nugent and January addition Chris Wood. He didn’t play at all in the run-in, nor in the play-offs, where Leicester lost to Watford in that never-to-be-forgotten semi-final.

But the following year the Foxes blasted their way to 102 points and the Championship title, and Vardy was one of the big reasons why. He partnered Nugent most of the season and tallied 16 goals and 10 assists, winning the Players’ Player of the Year award – even while missing the last couple of months with a groin injury.

So in 2014-15, a few years after toiling in the Northern Premier League, Vardy was in the top flight. In September, he burst into our living rooms in the most memorable game of the entire season, a 5-3 victory over Manchester United. He scored once, assisted twice, and displayed two of his most enduring skills: pace and winning penalties (stonewall or dubious). Here are extended highlights from that match, a nostalgia trip in itself:

But that was about it for quite some time. He didn’t get on the scoresheet again until March, when Leicester were deep in relegation woes. Then came their version of The Great Escape, with Vardy as James Coburn, maybe. He scored a last-minute winner against West Brom and another winner vs. Burnley, and the Foxes were home and dry a lot earlier than expected.

Still, he finished eight goals behind leading scorer Leonardo Ulloa, and you’d have to be a time traveller to have backed him for 24 the next season and 81 in the next four. And of course there’s that sort of unexpected Premier League title to consider.

It was quite a ride, wasn’t it? Leicester scored for fun until around Christmas and defended for fun afterwards. Vardy’s contribution epitomised the contrast. Fifteen goals in the first 16 matches, including the record 11-match streak; only seven in the remaining 20 before the title was clinched. In fact, at one point they won six of seven matches – five of them 1-0 – and Vardy didn’t score once. And did you remember he’d been red-carded and missed the two matches that put them over the top (helped by Spurs’ draw with Chelsea)?

But of course Vardy is an essential part of that season’s lore, and was a natural choice for the league’s Player of the Year. Having debated over which compilation video to embed, I’ve gone whole hog and chosen his 110 goals for Leicester City through this past September. Goals videos always make the scorer look like an all-time great, but two things strike you here: how often he’s running free behind the defence, and how many goals come from intelligent positioning.

We should also say something about his approach to the game, for which the word ‘brash’ is rather mild. It’s an abiding part of his appeal. Okay, his “all f**king mine” moment may have lacked just the tiniest bit of humility, but would you want him any other way? It’s like his style: straight to goal.

(By the way, he’s been sent off four times in his career, rather a lot for a striker. But be fair: he’s not ‘that sort of player’, just an intense competitor who occasionally gets out of control.)

Because he came to stardom late, his international career has been relatively ordinary. He also had the misfortune to emerge around the same time as Harry Kane. He didn’t get much chance in the most recent World Cup, starting only in the dead rubber against Belgium. And in a really unfortunate stroke of luck, an extra-time groin injury meant he couldn’t take his assigned place in the historic shootout against Colombia. And so it was Eric Dier who delivered the killer blow, when it might have been Vardy.

Still, in an ill-fated Euro 2016, Vardy came off the bench to score the equaliser in the group stage match against Wales, England’s only victory in the tournament. It was one of those right-place-right-time goals, a bit of a fluke, but he made a tricky finish look easy:

Now 33, has he declined at all? It certainly doesn’t seem so. Although Leicester play a different style these days, he can still get behind the defence when asked. His finishing was ridiculously good early in the season, and although it’s naturally faded somewhat, he’s still in the running for the Golden Boot, an honour that’s somehow eluded him so far. If he pulls it off, he gets official Old Folks XI legend status.

Whether he gets the gong or no, Vardy will be remembered for many special things: pace, attitude, the streak, the title. But to close I’d like to highlight something that doesn’t get mentioned as often: he stayed at Leicester City.

I’m not naïve enough to think it was all loyalty: he got a huge contract, and rejected Arsenal because their style didn’t suit his game. Nevertheless, in a world where the richest clubs routinely pick off the best talent, and where the Mailbox is filled with long lists of players Manchester United or Chelsea should sign, it’s been a pleasure to see a genuine star stay at a club where he made his name. He isn’t just Jamie Vardy: he’s Leicester’s Jamie Vardy.

So there have been no more titles, and there won’t be. But take a look at the table: City are pretty much a sure thing for the top four. That means Vardy will get another shot at the Champions League, while a lot of players at a richer club won’t. To which we can only say: yes! It’s just the place for a man with his title-winning record – including the most miraculous title of them all.