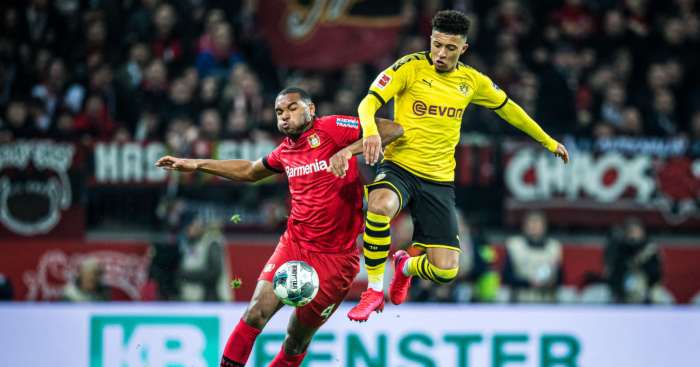 Leicester City are planning a move for Bayer Leverkusen defender Jonathan Tah as an alternative to James Tarkowski, according to a report.

Brendan Rodgers’ side are closely linked with England international Tarkowski, although Burnley are standing firm on their price tag.

Leicester’s £30 million bid was quickly rejected on Friday as Burnley value the player at £50 million.

According to the Daily Mail, Leicester could now bid for Tah as they see him as a cheaper alternative.

The 24-year-old is one of the most highly-rated centre backs in Germany. He helped Leverkusen to finish fifth in the Bundesliga last term and was the teammate of new Chelsea star Kai Havertz.

It’s unclear how much Tah would cost Leicester but it’s thought to be less than £50 million.

Tah would also offer the side international experience as he’s won ten caps for Germany since making his debut in 2016.

Rodgers is believed to be desperate for another centre back before the transfer window closes on the 5th October.

The signing of Tah or Tarkowski would bolster Leicester’s defensive options in preparation for their Premier League and Europa League fixtures.

Caglar Soyuncu and Jonny Evans are the current first choice centre backs. Evans is now 32-years-old, meaning Rodgers will need to find his replacement in the near future.

They’ve also been heavily linked with French defender Wesley Fofana and could match West Ham’s offer for the player.

Leicester recently signed Belgian right back Timothy Castagne from Italian side Atalanta. The player has begun his Premier League career well by scoring on his debut against West Brom.

The side’s only other summer signing is Turkish winger Cengiz Under from Roma. He’s signed on loan for this season but could join permanently for a £22 million fee if he performs well.

Under could make his debut for Leicester in their away fixture against Man City tomorrow afternoon.