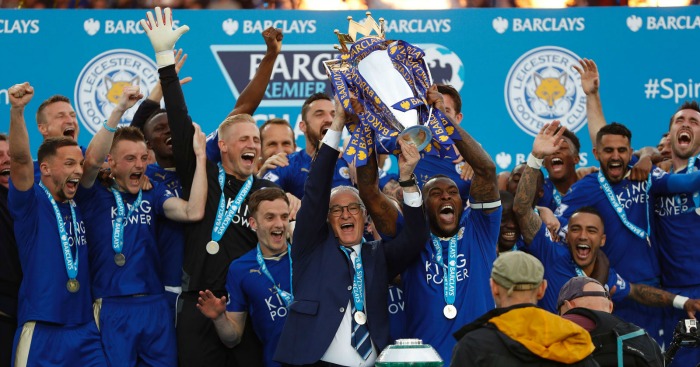 There is a line in David Goldblatt’s magnificent book ‘The Game of our Lives’, in which he describes English football not as a soap opera but a state-of-the-nation novel: ‘This is a world that is highly stratified and becoming more so, where mobility between those strata becomes rarer and harder, yet which believes itself to be a meritocracy.’

When Goldblatt wrote those words, they were true. Between 1993 and 2015, only five teams won the English league title. The two most recent additions to that list, Chelsea and Manchester City, were funded by owners worth (at the last count) a combined £25.3bn. The ceiling had been reinforced with bulletproof glass.

Then along came Leicester, rulebook ripper-uppers extraordinaire and the most surprising league champions since forever. In the age of 24-hour news we quickly demand the next story, but it’s worth regularly winding back three months to pinch yourself one more time. A team of just-not-quites, never-quite-had-beens and certainly-weren’t-yets really did win the Premier League against five of Europe’s nine richest clubs.

And so to the question of what comes next. At the risk of stating the bleeding obvious, the problem with ripping up the rulebook is that, well, there’s no rulebook left. There is no blueprint, no paradigm to follow. Claudio Ranieri cannot be measured against reasonable expectation, for that concept no longer exists.

Importantly, it isn’t just idiot writers and fans of every other Premier League club baffled by Leicester’s achievements, but Leicester themselves. Polls have taken something of a kicking recently, but my mini Ipsos Mori (three people I know) to find out where Leicester fans would be happy finishing this season produced answers of “top eight”, “mid-table” and “anywhere outside the bottom six”. That’s a stance the bookmakers agree with: you can get the same odds on Leicester winning the league (20/1) as going down. To put that in some perspective, the nearest club in odds for winning the league (Tottenham) are 500/1 to be relegated. The nearest club in odds for being relegated (Southampton) are 150/1 for the title.

If all that paints a picture of Leicester as the Premier League’s hinterland club, the cap fits. “It is going to be super tough next season,” said vice-chairman Aiyawatt Srivaddhanaprabha. “All of the small teams will be inspired by us. They will say if Leicester can do it, they can do it. The big teams will come back, real big teams. They are not going to let anything like this happen again.”

For Leicester supporters, the obvious answer is to embrace whatever happens after the Lord Mayor’s show. Finish bottom of the league for the next two seasons and Leicester would still only be where they were in 2009, and would have the greatest season in the club’s history as the fondest of memory. 2015/16 is theirs for keeps; nobody can take it away from them.

Yet if that is the romantic conclusion, it fails to represent the reality. Leicester’s title victory cannot be taken in glorious isolation, for the club must maximise the opportunity afforded to them by that season in the sun. On that basis, and without troubling Guinness as the world’s biggest killjoy, there are causes for headache.

The initial concern that Leicester’s squad would be picked off has proved unfounded. Jamie Vardy has signed a new four-year contract and Riyad Mahrez has not yet attracted bids that the club would be happy to accept. N’Golo Kante’s potential departure has been covered by the arrival of Nampalys Mendy, while Kasper Schmeichel is thought to be happy to stay rather than join Everton and forgo Champions League football.

Still, Leicester need significant reinforcements. Ranieri’s side played 43 games in all competitions last season (including three under-strength teams in the League Cup) but will reach at least 47 in the coming campaign, even if they exit every cup competition at the first hurdle. That becomes tougher still when you consider the perfect storm of Leicester’s 2015/16 squad. Ranieri’s six best performers – Schmeichel, Vardy, Mahrez, Kante, Wes Morgan and Robert Huth – started 218 of a possible 228 Premier League games, an unprecedented period of collective availability.

In the transfer market, Leicester are also quickly experiencing the ripples of their success. With pockets stuffed full of broadcasting revenues and with a squad in need of supplementing, Leicester are a seller’s dream. Suddenly Burnley and Watford want £20m and £30m for Michael Keane and Troy Deeney respectively. Still understandably unable to attract the Champions League best, Leicester are forced to pay a premium for the rest. It’s a difficult balance to manage.

If last season made Leicester sport’s greatest ever anomaly, it’s an impossible reputation to shake. ‘Second season syndrome’ (or regression to the mean, to speak outside of sporting cliche) lurks at the back of the mind, but in truth only relegation would dampen the spirit of even the most pessimistic of supporter. While that’s surely not where this fascinating story lurches to next, nothing is certain. That’s the thing about ripping up the rulebook; you can never claim to know what the next chapter says.