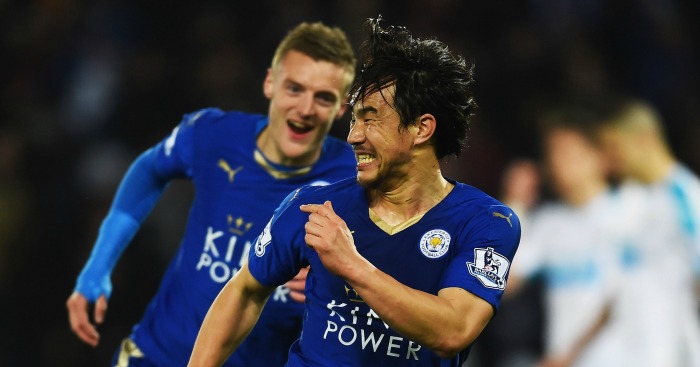 * Leicester City are the first team from outside of London or Manchester to win the Premier League since Blackburn in 1995.

* The Foxes were offered at 5,000-1 to win the Premier League title by some bookmakers in the summer – the longest odds on any successful single event in history.

* Claudio Ranieri has been in football management for 28 years, with Leicester representing his 13th club. Before this season, he had never won a senior league title. Howard Wilkinson is the last manager for whom England’s top-flight was his first league title.

* The only teams to have defeated Leicester in the Premier League since April 2015 are Chelsea (1-3 in April), Arsenal (2-5 in September and 2-1 in February) and Liverpool (1-0 in December). Arsenal, Bournemouth and Manchester United are the only three teams they have failed to beat in that timeframe.

* Leicester rank 18th in terms of possession in the Premier League this season, have recorded the lowest pass success rate, and only two teams play more long balls.

* Riyad Mahrez represents the first ever African winner of the PFA Premier League Player of the Year award. He was signed for Wayne Rooney’s weekly wage plus £50,000 from French second division side Le Havre.

* Robert Huth is the seventh player to win the Premier League with two different clubs. He has two winner’s medals from his time at Chelsea.

* Mark Schwarzer did not claim an official winner’s medal after not playing a single match for Chelsea in their title-winning campaign last season, but he has become the first man to win back-to-back titles at two different clubs since Eric Cantona for Leeds and Manchester United in 1991/92 and 1992/93.

* Peter Schmeichel won five Premier League titles with Manchester United, and his son Kasper now has one with Leicester. They are only the second father/son combination to win the Premier League since Ian Wright and Shaun Wright-Phillips.

* Leicester are the first first-time champions of England’s top flight since Nottingham Forest won their inaugural championship in the 1977/78 season.

* Leicester have experienced a combined 22 promotions and relegations in their 132-year history – the fourth-most in England.

* Of the 115 previous champions of the English top flight, eight finished lower than 14th the season before winning the title.

* Before this season, Leicester’s entire squad had won eight title medals between them. This is the fewest of a Premier League champion since Blackburn in 1995.

* Leicester accrued 41 points in the 2014/15 season. They have already amassed 76 this season, representing a seasonal rise of 35 points. This is the greatest year-on-year rise by any team in England’s top flight in the three-point era.

* Leicester’s most expensive ever signing is Andrej Kramaric, who was bought from HNK Rijeka for £9million last January. Manchesters City and United have both signed four players for more than £9million this season alone.

* The most ridiculous statistic of all is left until last: Leicester City are Premier League champions.