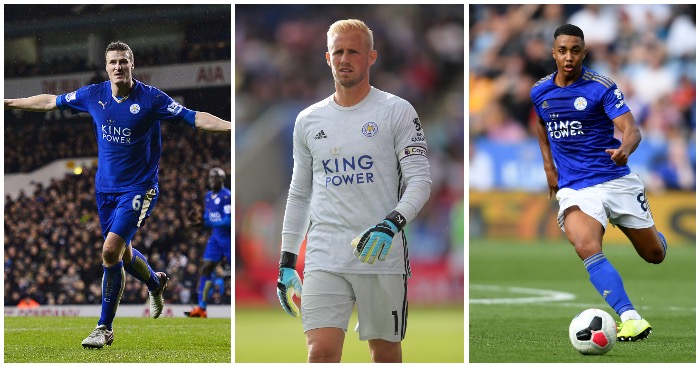 Leicester have been tipped this season – along with Everton and Wolves – to be in the mix for the top six. Smart summer acquisitions mean the Foxes now have a team capable of upsetting the balance at the top of the Premier League.

Have they built a better team than they did when they won the title as 5,000/1 outsiders (has anybody ever mentioned those odds?) in 2015/16? This is a combined XI of their team now and then…

Goalkeeper: Kasper Schmeichel
The only choice. The Danish international was a stalwart in the title-winning team and has missed just 13 games since.

Which Kasper Schmeichel save is better?

Right-back: Ricardo Pereira
Danny Simpson forced his way into the Leicester side in 2015 and was a consistent fixture in the most memorable season in their history. He’s a functional left-back – which perhaps sounds more insulting than intended – but Ricardo Pereira offers more. The Portuguese international possesses the same pace as Simpson, but his superior ball skills allow him to utilise that speed in attack as well as defence.

Centre-half: Jonny Evans
Wes Morgan was a superb leader for Leicester – he started all 38 games in their title-winning season – but Jonny Evans is a criminally underrated defender. Commanding in the air and calm on the ball, Evans was once described by Alex Ferguson as “the best defender in the country”.

Centre-half: Robert Huth
Turkish international Caglar Soyuncu has stepped into the shoes of Harry Maguire impressively so far this season – the Foxes have conceded just three times. But he’s got some way to usurp Robert Huth in this combined XI. A ‘proper defender’, all elbows and jawline – Huth loved defending but will also be remembered for his brace away at Man City in that winning season.

Left-back: Ben Chilwell
Christian Fuchs is a cult hero at the King Power Stadium. His bustling running style, leadership quality and eye for a wonder goal has endeared him to the Leicester masses – who plead with him to shoot if he’s within 30 yards. Ben Chilwell however, is now the preferred choice at left-back, and rightly so. The England international has a better first touch, set-piece delivery and has more of eye for a pass.

Central midfielder: James Maddison
Not a like-for-like comparison – they’re very different players. Marc Albrighton was a blend of hard work and crossing ability, James Maddison more guile and vision. While England selection is by no means an objective measure of quality, Maddison has been selected; Albrighton was not. Gareth Southgate could not ignore the clamours for Maddison’s inclusion, whereas any noise for Albrighton came exclusively from fans at the King Power Stadium.

Central midfielder: Youri Tielemans
Three goals and eight assists in the Premier League winning season for Danny Drinkwater. It’s easy to forget how influential he was considering how far he’s fallen since. He’s made just five Premier League appearances for Chelsea since his £35million move in 2017 and injury now keeps him from the bench at Burnley. Youri Tielemans however, is one of the brightest youngsters in the Premier League, and offers a degree of technical ability that Drinkwater doesn’t and did not possess.

Central midfielder: N’Golo Kante
Wilfred Ndidi is a worse version of N’Golo Kante – it’s that simple. In Leicester’s title-winning season, Kante made – on average – 4.7 tackles per game and 4.2 interceptions. Ndidi last season for Leicester made 3.8 tackles and 2.2 interceptions per game – enviable stats for anyone other than Kante, who Eden Hazard once described as “the rat” because “he goes everywhere”.

Attacking midfielder: Riyad Mahrez
Harvey Barnes has already proven his worth to Leicester this season with his wonder strike against Sheffield United – but he’s nowhere near the quality of Riyad Mahrez, and probably never will be.

The PFA player of the year in Leicester’s winning season, defenders knew what Mahrez was going to do – cut in on his left foot and bend it in the far corner – but they couldn’t stop him. So he did it time after time.

Attacking midfielder: Ayoze Perez
Ayoze Perez has got a lot to do to convince he is worth the £30million Leicester paid for him this summer – famously inconsistent, particularly in comparison to Shinji Okazaki. The Japanese striker got by on enthusiasm and merit as he would do everything he could to help the team. Perez’s goal tally of 12 at Newcastle last season suggest the Spaniard is the better second striker, but he could certainly learn something from his diminutive predecessor’s attitude.

Striker: Jamie Vardy
Jamie Vardy is doing what he did four seasons ago – a new lease of life under Brendan Rodgers and the striker is back to the form that saw him net 24 Premier League goals in the title-winning season. He has scored three goals from six shots so far this season. We will leave you to calculate his conversion rate.