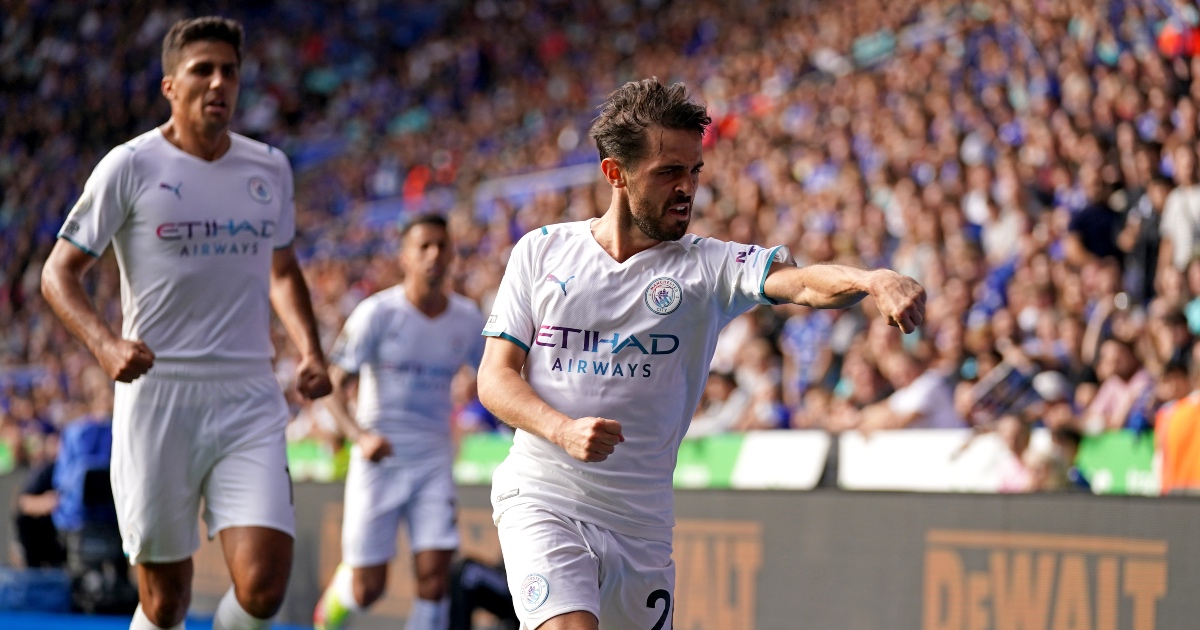 The forward’s first goal of the season gave the visitors a third straight win and revenge for last month’s Community Shield defeat to the Foxes.

City deserved a victory which threatened to elude them after a wasteful first half in which Gabriel Jesus was twice denied by Kasper Schmeichel.

Silva and Jack Grealish also had chances before the Portuguese struck to seal three points for Pep Guardiola’s side.

Jamie Vardy had a goal disallowed for offside while Harvey Barnes hit the bar for the hosts as their mixed start to the season continued.

The inconsistent Foxes are yet to find their rhythm. They were immediately on the backfoot and should have fallen behind after just six minutes.

It sparked a scramble and Silva’s effort was blocked before the Foxes eventually cleared and the near miss forced them into life.

Soon after Marc Albrighton sent Vardy racing down the right and he crossed for the arriving Barnes.

A combination of Kyle Walker and Ederson denied the winger as the trio collided before Walker turned Wilfred Ndidi’s follow-up behind.

Ederson was left bloodied by the clash and Jannik Vestergaard headed Albrighton’s resulting corner over.

It was the Foxes’ final chance of a hard-fought half as they were forced to dig deep to frustrate the visitors.

Schmeichel remained the last line of defence and he turned Silva’s shot wide after Youri Tielemans’ slip had gifted possession to City.

A neat free-kick routine then saw an unmarked Grealish shoot over and Schmeichel claimed Ferran Torres’ strike after 29 minutes.

City dominated while Leicester remained a looming threat on the break, but Guardiola’s side could not find a first-half breakthrough as Schmeichel denied Jesus at the far post again just before the interval.

The deadlock underlined why Guardiola wanted to sign Harry Kane and why their failure to land the Tottenham striker could end up costing them the title.

A trip to Leicester will test title credentials this season and the Foxes fired two warnings across City’s bows inside the opening five minutes of the second half.

First, Vardy picked out an onrushing Barnes for the winger to send a header on to the top of Ederson’s crossbar.

Vardy then left City sweating when he was sent clear by Ndidi to round Ederson and score, only to be on the wrong side of a tight offside call.

The champions, though, regrouped after the near misses and, after Torres steered a fine chance wide, Silva finally found the winner after 62 minutes.

Grealish teed up Joao Cancelo on the edge of the box and his drive hit Caglar Soyuncu to fall perfectly for Silva to fire in from an angle with Schmeichel stranded.

Brendan Rodgers responded by replacing the ineffective Barnes and James Maddison with Kelechi Iheanacho and debutant Ademola Lookman and the pair combined to almost conjure a leveller with 15 minutes left.

Iheanacho rode Walker’s challenge and shrugged off Cancelo to find Lookman, but Ederson raced off his line to turn his shot behind.

Fernandinho and Grealish had chances to add some gloss to the scoreline as City secured victory.