Home F365 Says Leicester may give Brendan sanctuary from himself… 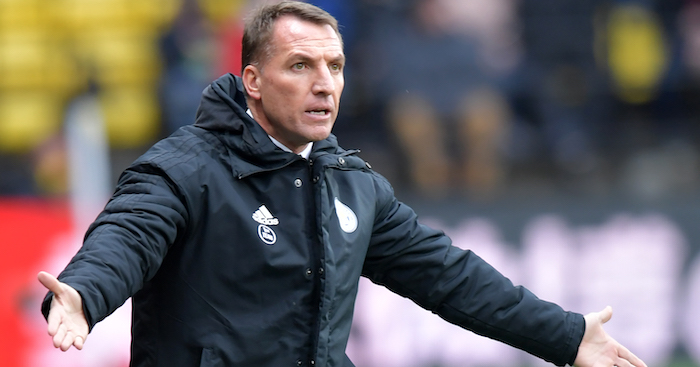 Brendan Rodgers’ absence from English football has not made the heart grow any fonder. His first game in charge of Leicester ended in defeat, with a late Andre Gray goal snatching all the points for Watford on Saturday, and people largely seemed happy about that. They enjoyed watching Rodgers shrivel on the touchline and seeing all that optimistic hot air vent away.

He built this caricature, of course. It’s been almost half a decade since Liverpool’s ill-fated title run collapsed in on itself, but Rodgers’ role as conductor remains vivid. The looks into the camera, the spin, the rhetoric, and those one armed goal-celebrations; combined with the emotions stirred by Liverpool themselves, he was particularly antagonistic. His time at Swansea had already portrayed him as a motivational LinkedIn profile come to life, but there – at the home of Shankly, Paisley and all that gravitas – Rodgers’ personality went supernova.

The discussion of his decision to leave Celtic is still hot and raw. He is seen as having walked too easily away from all the history and prestige of Celtic Park and having done so at the first sign of interest from south of the border. Worse, he has done so having said that he absolutely would not and having spent that past three years bowing at the altar of Celtic’s self-regard. Whether he left for the wages, the profile, or the promise of a hefty transfer budget, it’s possible to both understand and rationalise that decision, but also to feel that it’s another ugly moment in a career which desperately needs a more sympathetic light.

Ironically, perhaps the greatest commodity now in Rodgers’ possession, the one which will provide more flattering aesthetics, is one which likely didn’t instruct this decision at all. He is now in charge of an underdog again. Leicester are a good Premier League team, potentially an excellent one, but they exist in a very different orbit to either Liverpool or Celtic. They are equipped with plenty of ambition – the new £100m training ground attests to that, as do the plans to expand the King Power Stadium – but silverware is a hope rather than an expectation. Even 2016 hasn’t changed that.

When the decision was made to hire Rodgers, it wasn’t made with the belief that he would lead them back to those heights, merely that he would accelerate the growth of a new identity; Leicester want to be playing attractive, possession-based football and they want to be doing it with young, pliable footballers. Rodgers gives them an excellent chance of doing both.

Those conditions will suit him. Underneath the bluster, he is a very fine coach who has a proven record for delivering a technically advanced and exhilarating style. And, while Leicester’s comparative affluence may have been what originally caught his eye, their young and talented squad will have engaged his interest too. Rodgers’ coaching is about empowerment. He uses words like ‘facilitation’ and phrases like ‘human needs’ and while that ‘new Dad’ act doesn’t play with older, more hardened professionals, he has a fine record in developing younger players for a reason.

He will have assessed Leicester’s squad, noted the unrealised potential of Demarai Gray, James Maddison, Harvey Barnes and Ben Chilwell – and probably the intriguing prospect of Hamza Choudhury too – and seen the seeds of a truly exhilarating football team, one which neutrals would gladly sit down to watch.

But the restraints are as important as the resources. Leicester operate under a glass ceiling which should – should – provide a natural check on his personality. If the aim is to separate Rodgers from Brendan – the coach from the welfare officer, the orator, the figure of fun – then the Midlands is a good place to do that. The stage lights aren’t so bright and the history isn’t nearly so seductive.

One of the great descriptions of Rodgers, written several years ago by Jonathan Wilson in The Guardian, was of a man ‘who expects a film to be made of his life’. Wilson was referencing the ‘tea and toast’ anecdote from Rodgers’ final full season at Anfield, but – in a broader sense – it characterised how he was perceived.

Liverpool, like Celtic, is a club of ghosts. Of great men who have done wonderful things and who, more often than not, had an influence which leaked beyond the pitch and stands, and into the community itself. Rodgers seems to struggle with that kind of scenario, his personality demanding that he try to insert himself into the club’s history.

Before Steven Gerrard’s slip against Chelsea and during the period when Liverpool appeared to have an irresistible momentum, that notorious meme surfaced on social media, in which Bill Shankly and Bob Paisley looked down on Rodgers from the clouds. “How am I doing, boss?” Even just thinking about it can make you cringe out a kidney. Nevertheless, it’s something that you can almost imagine Rodgers creating himself. Not motivated by ego, but because the past was so obviously important to him. Succession is always important at a football club, but his interpretation was just a little too literal.

Kevin, a Liverpool [@LFC] fan: "Brendan Rodgers is like a cross between Bill Shankly and Bob Paisley." #LFC #BBC606

One of the first steps he made on arriving at the club was to re-introduce the red goal-netting at Anfield -an obvious throw-back to a different, more successful time and completely harmless in isolation, but in retrospect part of a pattern of behaviour. Added to his overt socialist beliefs, which were worn heavily in front of journalists, and those adopted, Shankleyish mannerisms on the touchline, he came across as a try-hard, like someone crowbarring himself into the native culture.

There was a curious incident at Celtic, too, which has not been widely reported. To promote the publication of his book, Road To Paradise, Rodgers took part in ‘an evening with’ event, hosted by Eamonn Holmes in October 2017. On stage, he told a story about his first day in the job, and an encounter with Danny McGrain, the legendary former full-back and one-time Scottish Footballer Of The Year. Unlike the rest of the staff, Rodgers recalled, McGrain hadn’t changed into his coaching gear that morning. Instead, he was waiting for Rodgers in street clothes at Lennoxtown and asked him if he was still wanted as a first-team coach.

An odd story, not least because McGrain has implied since that it never actually happened.

At the heart of many Celtic supporters’ irritation lies this specific problem. Most recognise Rodgers as a startlingly bright coaching mind, but many took umbrage with his attempts to be more than that. He was a Celtic man, he insisted, someone whose ties with the club were familial, linear and real. At every turn, he attempted to layer his position with symbolism. Symbolism which now seems more than a little synthetic.

Truthfully, the McGrain episode probably wasn’t vindictive, but its purpose was clear enough: it was Rodgers making a point. Yes, he knew who McGrain was and, yes, he understood his standing at the club. Footage of that night does exist. It records Rodgers’ great show of humility and his wondering aloud as to how, in what world, McGrain could ever be asking him for anything.

Given the events of the past week, it doesn’t reflect well at all. But even then, back in 2017, it’s difficult to fathom. If McGrain’s memory is correct and the incident was a figment of Rodgers’ imagination, then it – again – is suggestive of his craving for something other than proportional affection. It may not make him a bad person or even anything less as a coach, but it is hard to understand. Maybe it’s nothing more sinister than wanting to fit in, the manifestation of an inner fragility which needs reassurance, but it’s still strange behaviour and does imply that at these bigger clubs, where there remains a demand for dynastic leadership, Rodgers is prone to losing himself.

Michael Calvin’s Living On The Volcano dedicated one of its chapters to Rodgers, giving rise to that notorious anecdote in which he jogs through the streets of Liverpool, ‘smelling the mince cooking’. It’s him at his worst, making one of those ugly lunges for acceptance. But perhaps the most revealing moment in the interview occurs later, when Rodgers was talking specifically about who he was trying to succeed and the impact that had on him.

“I get supporters coming in here (his office) with a flag that’s been signed by every Liverpool manager. I look and see that that’s actually Bill Shankly’s signature, and Bob Paisley’s. It’s surreal. I’m seized by the feeling of how lucky I am, but also by fear. I look at where I’ve come from and what I’ve got to live up to.”

There’s the literalism again, that curious compulsion Rodgers has to occupy a fourth managerial dimension.

At Leicester, thankfully, none of those complications are in play. The club has a fine history, a remarkable recent one, but nothing equivalent to where he’s been. Previous managers don’t haunt the corridors and whisper in the night there, neither have they left impossible legacies which have to be fought and matched. At the King Power, the risk of Rodgers being infected by nostalgia and mythology is mercifully low.

There, he can just be a coach. Training bibs, cones, team-talks and tactics. Leicester may have tempted him south with their financial muscularity, but they’re also offering sanctuary from himself. In a clearly defined role, in which the mind might not wander and the imagination might not dance with ghosts.