Home All The News Leicester signing Castagne ‘was made for Prem’, says teammate 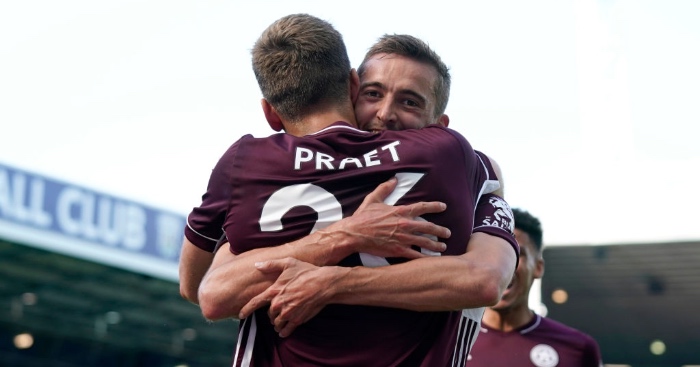 Leicester midfielder Dennis Praet believes new teammate Timothy Castagne ‘was made for the Premier League’ after his solid start to life in England.

Castagne joined from Atalanta on a five-year-deal in September.

Leicester paid a reported £21.5 million for the defender after his impressive performances in Italy.

The Belgian international has made seven appearances for the Foxes already, scoring one goal.

His compatriot and teammate Praet has now revealed why the new signing is so effective: “Players who succeed in Italy won’t always be good players in the Premier League, and vice versa.

“But in Timothy’s case, he was really made for the Premier League. For him, the transition was helped by the fact he has an above normal physical condition.

“He can run for 90 minutes without stopping. He’s a machine. So, it’s a league and role, on the right, made for him because he can be a windscreen wiper on his right-hand side. He loves it. He’s made for it.”

Castagne has played an important part in Leicester’s exciting start to the season.

They’ve beaten Pep Guardiola’s Man City convincingly and have picked up wins against Arsenal and Wolves.

Castagne has provided plenty of stability in defence for Leicester.

He’s currently deputising for the injured Ricardo Pereira. The Portuguese player is expected to be out until after the international break.

Pereira was one of Brendan Rodgers’ star players last campaign. But Rodgers may have to find a way of incorporating both players if Castagne continues to impress.

Talisman Jamie Vardy has also been on form once again for the Foxes this campaign.

The Englishman has scored nine goals in just eight games to prove how important he is to Brendan Rodgers.

Their next fixture is against Liverpool on Saturday 21st November.