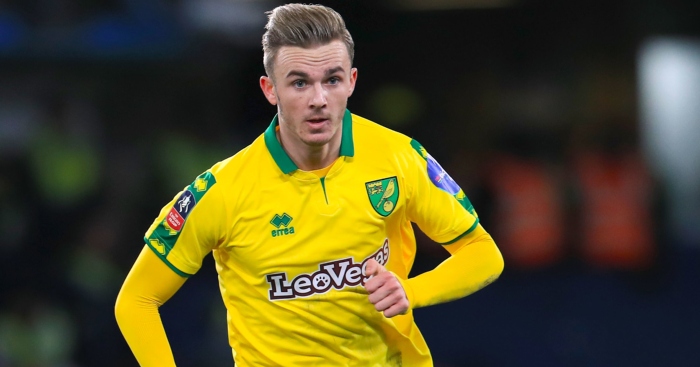 Leicester have continued their spending spree with the signing of James Maddison from Norwich for a fee rising to £24million.

The midfielder has agreed a five-year contract at the King Power Stadium with the Foxes’ summer spending now nearly £50m.

Southampton and Everton held a firm interest in the 21-year-old but a switch to Leicester was Maddison’s first choice and the transfer is a record Sky Bet Championship sale.

He told the club’s official site: “I’m delighted. I’m really happy to be here. I had a good chat with the manager about football and how he wants me to play, how he likes to play and I was sold.

“We talked about the type of player I am, how I’m going to fit into his style of play and everything sounded really promising. I haven’t looked back since that phone call.

“Leicester just seems like the right fit for me. I’ve got a good feel about the club and I can’t ignore that, in my head and my heart. I felt like this was the right place for me to be, so I’m delighted and can’t wait to get started.”

Maddison passed a medical on Monday despite still recovering from a knee injury he suffered in May.

It allows the England Under-21 international – Norwich’s player of the year last season – to move closer to his family in Coventry after he left his hometown club for Norfolk in 2016.

Leicester have already signed Ricardo Pereira and Jonny Evans for a combined total of around £25m and Maddison’s deal nearly doubles their spending.

It is a vote of confidence for boss Claude Puel after the Foxes struggled in the second half of last season, missing out on a Europa League spot by finishing ninth.

Puel said: “James is a wonderful player who is one of the most exciting young talents in English football.

“He made a big contribution to Norwich City last season and I’m delighted that he has decided to make the step up to the Premier League with Leicester.”

Leicester are revamping their squad after several failed transfer windows since their shock Premier League win two years ago.

Robert Huth has been allowed to leave while Ahmed Musa, Nampalys Mendy, Islam Slimani and Leonardo Ulloa are also likely to exit.

Norwich needed cash after failing to return to the Premier League after relegation in 2016 and Maddison’s departure is a record sale.

They have raised around £70m from the sales of Robbie Brady, Nathan Redmond, Jacob and Josh Murphy and now Maddison in the last two years.

Maddison made 53 appearances for the Canaries, scoring 16 goals, after joining from Coventry, with the Sky Blues earning some cash from the switch due to a sell-on clause in the deal which took him to Norwich.