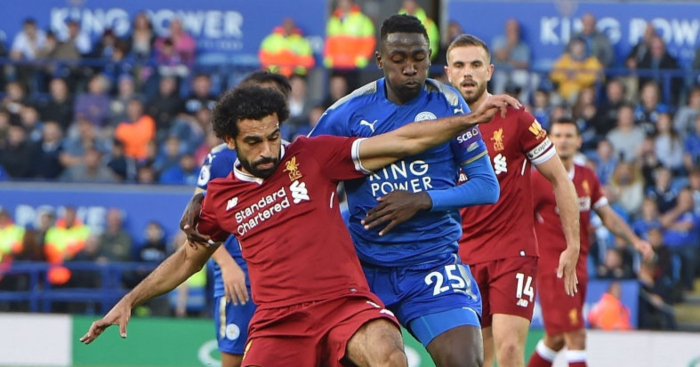 A record of three wins and no goals conceded from three games has surely confirmed that Liverpool are best equipped to challenge Manchester City for the Premier League title this season – although it is fair to say Jurgen Klopp’s team haven’t really been tested yet. A trip to Leicester City will teach us far more than we’ve learnt from their opening three matches.

But this is arguably a bigger game for the Foxes. Back-to-back Premier League wins has strengthened Claude Puel’s position and yet the Frenchman’s uninspiring tactics leave him vulnerable should results deteriorate. A heavy defeat to Liverpool will crank up the pressure.

Here are five key questions ahead of Saturday’s big game:

1) How do Liverpool improve their chance creation against deep-lying opponents?
Despite their 100% start, Liverpool have struggled to break down defensive opposition so far this season, needing a penalty to score the opener at Crystal Palace and a defensive error from Yves Bissouma to find the net against Brighton. This is primarily because fearful opponents increasingly recognise Klopp’s counter-press can be nullified by a deep defensive block (which also explains Liverpool’s clean sheet record; it’s hard to counter-attack when camped inside your own third).

Leicester will follow the template set by Brighton last weekend and sit in a narrow 4-4-1-1 formation that clutters the middle of the pitch, suffocating Liverpool’s front three by forcing them to play with their backs to goal in congested areas of the final third.

How do Liverpool pick the lock? Xherdan Shaqiri, signed to play in the false eight role Philippe Coutinho occupied towards the end of his Anfield career, may be given game time soon, although Klopp is unlikely to make changes on Saturday. It could take a cameo from Shaqiri or Adam Lallana to get past a sturdy Leicester defence, but it is vital Liverpool’s front three learn how to adapt to these types of challenges: after terrorising defences last season, attack-v-defence matches are the new norm.

2) Will Robertson and Mane capitalise on Amartey’s weaknesses?
Liverpool will need to counteract the narrow defensive blockades with width, and on Saturday it is Leicester’s right flank that will be most vulnerable. Daniel Amartey was woeful in the season opener against Manchester United (directly at fault for both goals), but after being dropped for the 2-0 victory over Wolverhampton Wanderers was restored at right-back for the trip to Southampton. He had another poor game.

Wary of the threat of Nathan Redmond, Puel played right-back Ricardo Periera in front of Amartey last weekend to strengthen his right flank, a tactic he will most likely repeat with Sadio Mane and Andrew Robertson up next. It is worth noting that Redmond dribbled past Amartey several times at St. Mary’s, while Ryan Bertrand and Danny Ings got to the byline too easily. Five of the seven chances Southampton created from open play were down Amartey’s side of the pitch.

Robertson is statistically the second most creative player in the Liverpool team this season (3.0 key passes per match), which is an obvious cause for concern for Leicester fans. If Klopp instructs his team to target the left flank his side should win comfortably.

3) Will Maguire and Evans take advantage of Liverpool’s vulnerability to headers?
Brighton frequently caused problems from set-pieces last Saturday, while Pascal Gross and Shane Duffy both came close to scoring with headed chances in the final few minutes of the game. Liverpool clearly haven’t solved all of their defensive worries, and if crossers can avoid Virgil van Dijk then this run of clean sheets will come to an end.

James Maddison has made an excellent start to his Premier League career and the 21-year-old’s dead ball delivery could be a key weapon at the King Power, particularly with Harry Maguire and Jonny Evans to aim for. Van Dijk can’t mark both of them.

However, Leicester have only won nine corners so far this season and are yet to take a free-kick within 30 yards of goal. They’ll first need to improve the speed and effectiveness of their counter-attacks to draw the fouls or earn the corners needed to threaten the Liverpool back line.

4) Can Maddison and Gray lead the counter-attack in Vardy’s absence?
Vardy’s suspension is hugely significant. The 31-year-old has scored 24 goals against ‘ Big Six’ opponents in the Premier League, a remarkable 38% of his total, and seven of these have come against Liverpool. But Leicester won’t just miss Vardy’s goal threat.

His runs on the shoulder of the last defender gives his teammates something to aim for on the counter-attack: a target for their long balls into the channels. Kelechi Iheanacho is a completely different type of player, mostly receiving the ball to feet with his back to goal, and so Leicester need to find an alternative way to break.

Maddison’s excellent passing range and composure under pressure will be vital to outmanoeuvring Liverpool’s counter-press and feeding Demarai Gray on the left. The combination play of these two, with the latter’s pace an important weapon to exploit the spaces left by Trent Alexander-Arnold, should define the effectiveness of the hosts’ counter-attacks.

5) Can Ndidi stunt Salah’s creativity?
The most important head-to-head on Saturday is between Mohamed Salah and Wilfried Ndidi. The Egypt international has completed more key passes (12) than any other player in the Premier League so far this season, while last season Leicester’s defensive midfielder made the most tackles (138) in the division.

Against Brighton, whose defensive formation resembles how Leicester will approach Saturday’s game, the vast majority of Salah’s key passes were from a centre-right position outside the penalty area. This is an area of increasing importance to Salah now his ability to run in behind has been limited, which is why Ndidi’s role is so significant at the King Power. If the Nigerian can stamp out Salah’s influence by dispossessing him in the final third he might just trigger decisive counter-attacks as well as suffocate Liverpool’s biggest threat.