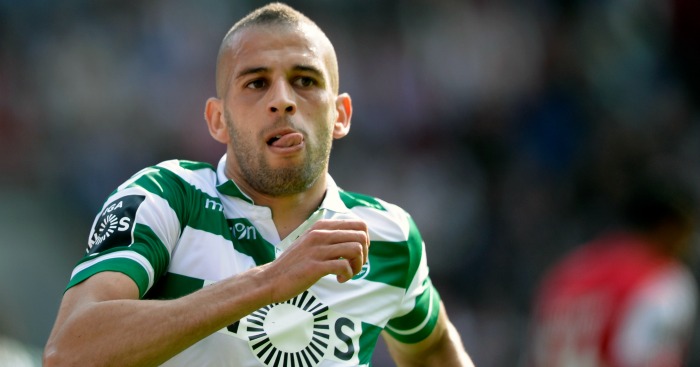 Leicester boss Claudio Ranieri is prepared to hand a debut to record signing Islam Slimani against Liverpool – even though the striker is yet to train with his new team-mates.

The Algeria forward joined the Foxes for around £28million from Sporting Lisbon on transfer deadline day and is due back to his new club on Friday.

The deal smashed the Premier League champions’ transfer record after they paid £16million to sign Ahmed Musa from CSKA Moscow in the summer.

But despite Slimani having been away – playing (and not scoring) in Algeria’s Africa Cup of Nations 6-0 win over Lesotho – since clinching his move, Ranieri would not hesitate playing him at Anfield on Saturday.

He said: “I haven’t seen him (yet) but I will speak with him. He is available for Saturday, he could play but I want to speak with him, to see him and they we will see.

“Yes (it would be a big call), but he is good. He only has to score goals. He is ready, he played all the matches with Sporting and he is ready to play with us.

“It is important when a player changes country that he has to adapt and keep calm. Of course we bought him because we believe in his ability.

“It is a goalscorer but it is important he understands the Premier League. It is different from the Portuguese league but he is a very interesting player.

“He’s similar to (Leonardo) Ulloa. Now we have two big boys up front who can also play together. We have a good platform and are building now – when we play lot of matches I’m very confident when they’re fit and ready to play.

“He cost a lot of money but if you see the market, it was a crazy. I think as a goalscorer he cost less than others. He was a good buy for us.”

Ranieri will also have Kasper Schmeichel fit after the goalkeeper came off in Leicester’s 2-1 win over Swansea with a hernia problem.

The Denmark international has recovered from an operation and is likely to keep Ron-Robert Zieler on the bench after the German replaced him against the Swans.

Nampalys Mendy is also still out with an ankle injury while Jeff Schlupp will not be risked as he continues to recover from a muscle strain.