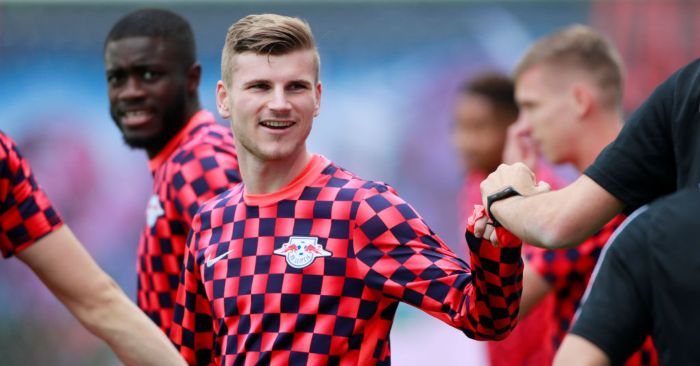 Leipzig have discussed the future of Timo Werner for the first time since he agreed personal terms with Chelsea.

Chelsea stole a march on Liverpool to negotiate a five-year, £200,000-a-week contract with Werner earlier this week.

Frank Lampard was key in persuading the German to join by revealing a ‘three-year plan’ to return the Stamford Bridge club to Premier League glory.

Does Werner make Chelsea ‘one of the most exciting teams’?

The Blues must still negotiate a fee with Leipzig for Werner, whose £54m release clause expires on June 15.

If, as is likely, Chelsea agree to match that fee, Werner must notify Leipzig of his intention to activate the rescission of his contract.

Oliver Mintzlaff, managing director of the Bundesliga club, says they have not yet heard from Chelsea, but the negotiations are expected to be held early next week.

“We haven’t had an exchange with Chelsea yet,” Mintzlaff told Sky Germany before the club’s draw with Paderborn, during which Werner assisted Patrick Schick’s opening goal.

“So far, Timo Werner has not drawn the clause nor has a club sent a transfer contract.

What Mintzlaff telling us:

Werner got to draw the clause, not Chelsea

Nothing new in this https://t.co/7eaEPCiWpX

“We have nothing to report and do not take part in the daily speculation.

“Timo Werner is an RB Leipzig player. It was important for us that we extended his contract, which we did last summer, because of course it is important for our young club that no player moves free of charge.

“Of course, there was this release clause that we put in the contract to give him the opportunity to take the next step. Now Timo Werner is sitting in the driver’s seat, no longer us.

“If Timo Werner should change clubs, then we are sure that with the new, buying club we will first find the clause for him to end the Bundesliga season, whenever that is.

“We can only discuss when we know when the Champions League is going to take place. It won’t be decided until mid-June.

“He signalled a few weeks ago that he was busy with a transfer. Until now nothing is done.”

Chelsea will fund the move for Werner and Hakim Ziyech, as well as possible deals for Ben Chilwell, Jeremie Boga and Jadon Sancho, by selling up to ten first-team players.

Pedro, Willian, Marcos Alonso, Jorginho, Kurt Zouma, Ross Barkley, Michy Batshuayi, Emerson Palmieri, Davide Zappacosta and Tiemoue Bakayoko could all be offloaded, while the Blues are due around £48m from Atletico Madrid for the transfer of Alvaro Morata.