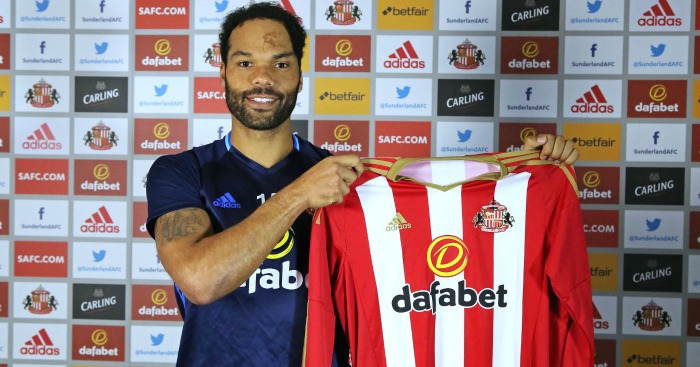 Joleon Lescott has become Sunderland’s newest recruit after manager David Moyes once again turned to one of his Everton old boys.

The 34-year-old central defender has been training with the Black Cats in recent days following his release by Greek side AEK Athens in November and has now followed Victor Anichebe and Steven Pienaar to the Stadium of Light after signing a contract until the end of the season.

A statement read: “Joleon Lescott has joined Sunderland AFC on a short-term contract. The defender has put pen to paper on a deal with the Black Cats until the end of the season.”

Birmingham-born Lescott, who has 26 England caps, began his career at Wolves before Moyes paid £5million to take him to Goodison Park in June 2006.

His form on the blue half of Merseyside, where he made almost 150 senior appearances, earned him a £22million switch to Manchester City three years later. He collected two Premier League winners’ medals before he eventually left the club as a free agent for West Brom in 2014.

He stayed at the Hawthorns for little more than one season before a similarly brief spell with derby rivals Aston Villa and his truncated spell in Greece.

Lescott’s arrival will boost Sunderland’s defensive resources as Moyes looks to bolster his squad on an extremely limited budget.

With Papy Djilobodji facing a four-game ban after being charged with violent conduct during Saturday’s 2-0 Premier League defeat at West Brom and Lamine Kone currently on African Nations Cup duty, it could hardly be more timely.

Moyes has little to spend this month, but is also restricted by the fact that the Black Cats have almost reached their wage cap under Premier League finance rules.

That situation could be eased slightly this week if Patrick van Aanholt does complete a £12million switch to Crystal Palace, with talks ongoing between the two clubs after an initial offer was rejected.

Moyes had hoped to hang on to his better players – Sunderland have also rebuffed a £6million bid from West Ham for Jermain Defoe – but is equally aware of the difficulties of trying to keep a player who wants to leave.

The manager admitted last week that the players he may be able to bring in in January are unlikely to make “a big difference” to a squad which has been riven by injuries and international call-ups in recent weeks.

The club is understood to have tabled an offer for versatile Norwich midfielder Robbie Brady, although they received little encouragement.

Van Aanholt is the club’s only specialist left-back, although Lescott is left-sided and has played that role earlier in his career.

Moyes will be boosted by the returns of keeper Jordan Pickford from injury and Kone, Didier Ndong and Wahbi Khazri from the African Nations in the coming weeks.

However, he currently has a concern over Anichebe, who suffered suspected knee ligament damage after his return from a hamstring injury as a substitute in last Saturday’s 2-0 defeat at West Brom.