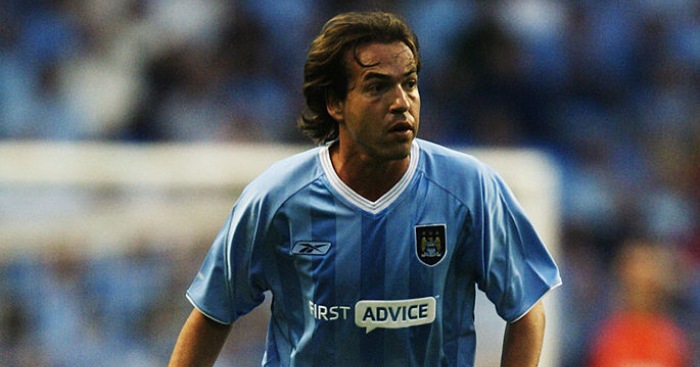 We take a look at players for whom we have a great deal of lingering fondness, sometimes for reasons unclear. And start with one Eyal Berkovic…

From where did he appear?
He cameth from Israel, from seven seasons with Maccabi Haifa, the team that occasionally you’d see make it through to the Champions League group stage in late 90s games of Champ Man. And this was back when the internet had no way of telling you everything you needed to know, so he could have done absolutely anything with them and you’d be none the wiser. Wikipedia says he won the Israeli league twice, and was awarded Most Valuable Player in 1993-94, which presumably began the process that would eventually culminate in then-Southampton manager Graeme Souness bringing him to the Premier League.

This was in 1996, the same year Souness took a crank call from a university friend of one Ali Dia – purporting to be FIFA World Player of the Year George Weah – telling him Ali Dia was his cousin and was an excellent footballer. Souness checked Google to see if this was true, discovered that Google at that point didn’t exist, so presumably instead decided to go with his gut and sign this Ali Dia on a one-month contract.

But for also introducing to the Premier League a small, frenetic, classy, whippet-like playmaker, we should give him due thanks.

How did it go?
It went wonderfully, from the start. The start being, after a few games to find his feet, a starring role in one of those games etched into the lore of the Premier League – the 6-3 defeat of Manchester United by Southampton at the Dell, quite the most idiosyncratically disgusting of the old Premier League grounds, and thus hard to not view fondly when you see it appear from the archives with its rigid nets and insane-gradient behind-the-goal stand. For a snapshot of a certain era in the Premier League, all is here. Roy Keane getting sent off for acts of violence? Check. David Beckham scoring a peach of a free-kick? Check. Matt le Tissier scoring the kind of goal that informed your sense that, at that time, probably only Zidane was a better player? Check, thanks to a mazy little weave in and out of some United players on the edge of the box, before a chip over Peter Schmeichel – stood on the edge of his six-yard box – which squeezed the ball through a small wafer of space between his vast hand and the crossbar. Solskjaer, Claus Lundekvam, the hapless pair of Jordi Cruyff and Karel Poborsky, Ulrich van Gobbel – all here.

But beyond Le Tissier’s goal, it’s the contribution of Eyal Berkovic that is emblazoned in my mind. First, after scoring his first goal, a pelted outside-of-the-boot half-volley, he sprinted off in celebration with both arms furiously outstretched, grasping the air like a lunatic. Come the second goal, a sweet volley into the top corner from outside the box, the same, but ending with a lean-back, his hips thrust out, both arms now doing a crude have-some-of-that simultaneous juggling motion.

You could scour the line-up of many a Premier League team at the time and not find a single player who could remotely convince as the playmaker who seeks the elegant pass. This was shortly after Blackburn had won the league with a midfield of Tim Sherwood and David Batty, plus two streaky wingers; when bypassing the midfield completely to get balls into the box was A-OK. Berkovic was clearly not of this mould. He liked fast, dynamic, unexpected passes, dribbling in tight spaces. Just the type, then, to catch the attention of Harry Redknapp, overseeing a West Ham team that, had they been able to keep the whole lot together – Rio Ferdinand, Frank Lampard, Joe Cole, Jermain Defoe, Paolo di Canio and of course Stan Lazaridis – would have been quite something. You wouldn’t believe what I’ve learned: Jimmy Bullard – in the season Eyal Berkovic joined West Ham for the eye-watering sum of £1.75million – was playing in their reserves.

His first season at West Ham, and assisted by Premier League greats Ian Pearce and Samassi Abou, Berkovic helped the Hammers jump from 14th the previous season to eighth. But in the 98-99 season, having added both Ian Wright and Di Canio, who joined in January – still under the not-sure-about-this-one cloud at Sheffield Wednesday from when he pushed over the referee Paul Alcock – the Hammers, with a smattering of goals and assists from Eyal (in a svelte midfield alongside Frank Lampard and Steve Lomas) made it to fifth and the promised land of an Intertoto Cup third round draw. Having knocked off Jokerit (apparently Finland) in that round, could they beat Heerenveen? Yes. But could they then beat Metz in the final? Yes, despite losing the first leg 1-0 at home to a goal from a youthful Louis Saha. Could they progress past Steaua Bucharest in round two of the UEFA Cup? No. Which didn’t matter particularly to Eyal, you assume, because he’d transferred to Celtic by then for a princely £5.75million. Things, you see, had got a bit difficult at West Ham.

What was his defining moment?
Well, it was him getting kicked in the head by John Hartson in training so hard that, as the man himself puts it, “if my head had been a ball, it would have been in the top corner of the net”. In a piece of grim CCTV-hazy footage that already has the aspect of ‘an atrocity is coming’, a figure lies flat-out on the ground, John Hartson goes to help it up, having presumably just put it there, and when the figure, which is Berkovic, throws an angry punch at Hartson’s leg, Hartson takes a moment to consider his options, then kicks a knee-bound Eyal flush in the chin.

Some interesting curios. First, in Berkovic’s debut West Ham season, only two of his seven goals came in games in which Hartson didn’t also score, including twice splitting the goods when West Ham beat Spurs and then Liverpool 2-1. Just thought you should know. Also, from the mouth of the man himself, years later, and with no obvious reason to lie: “I tell you, John was my best friend in the team…we used to go to dinner a lot, during my time at West Ham.” Demonstrating the sharp teeth of professional sport at the highest level that occasionally cuts through all the-lads/the-team niceties, it was Berkovic who was deemed the more difficult presence, compared to the reliable 20-goal-a-season Hartson. And though this happened in September when the season was up and running, as Wikipedia politely puts it: ‘Soon after, he was signed by Celtic.’

Why does he stick in the mind?
For the best examples of why he should be fondly remembered – beyond that first flash at Southampton – the place to look is Manchester City, when he returned to England permanently from Celtic in 2001. With delightful options around him – Shaun Goater, Shaun Wright-Phillips, Paulo Wanchope, Darren Huckerby – the true maestro inside the diminutive Israeli was revealed. The keenness to play the killer pass, to wrong-foot a defence with classy, subtle angles, the fervent, nay hurtling nature of his movements, the enthusiasm to create opportunities for teammates which always makes the heart of a fan sing anew, as well as an elegant composure of his own in front of goal, capped off by then losing it and running around like an arm-flailing loon whenever he did score. He was integral in the City team that smashed blue hell out of Division 1 in his first season, and upon returning to the Premier League, laid on eight assists, scored a goal, and was named City’s player of the season. That assist-count is unrepresentative of quite how much string-pulling he was doing; it was him who’d unlock the back line with a pass to the wingers who would then cross for the goal.

But of everything I watched, doing this – and I should bring to your attention the bizarre charm of a YouTube vid of a group of Israeli fans travelling to Upton Park to watch him, subtitling the gameprediction of a cockney West Ham tea-lady in Hebrew – what made me warm to him all over again was this, when speaking on the potential of a new teammate who had caught the public’s collective eye, the young Wright-Phillips: “Shaun is my favourite player in the club. I like him, his character – I like him as a man, I don’t care of the player. He’s a great player, but leave the player outside, he’s a nice guy.”

Eyal Berkovic Lest we forget
ADVERTISING