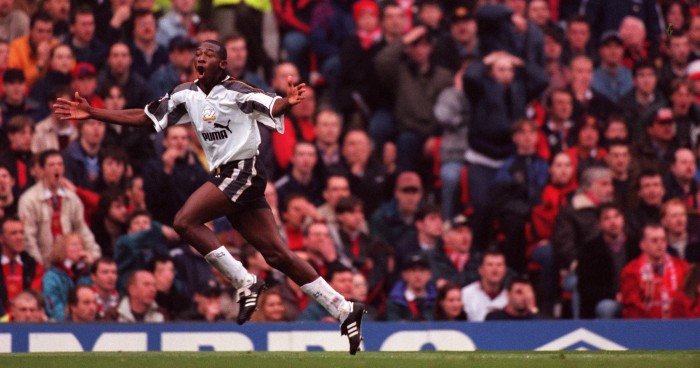 We take a look at players for whom we have a great deal of lingering fondness, sometimes for reasons unclear. We started with one Eyal Berkovic, moved on to Pierre van Hooijdonk and Laurent Robert, and now arrive at a lovably gangly striker…

From where did he appear?
He cameth from Costa Rica, which in the parlance of 1997 – when he landed with a slalom-legged bang at Derby County – meant he may as well have come from the moon. Even high-profile European players existed mainly as their names. You’d often find yourself thinking a certain player was amazing because, in a televised Champions League or Serie A game, you saw him be amazing, and assumed he was being that all the time. Subsequently I’m unable to shake the sense that it’s not Ronaldo nor Christian Vieri but actually Maurizio Ganz who’s the best player to have ever played for Inter (26 goals in 68) because, for two weekends of Gazzetta Football Italia in a row, I watched him score a brace. We waited for the World Cup with baited breath, so we could know. And if a player was playing in Costa Rica, we didn’t know.

Not that it seems like the fans of CS Herediano in Costa Rica would have known that much either. He scored 20 goals in 14 games for them, fine – but spread over a quite unfathomable four years. Given that I can find not one single scrap of visual evidence from that time, I assume that Paulo was essentially employed on a freelance basis by Los Florenseses (The Florists). That’s actually pretty Wanchopean; an improvised early career. I like to imagine him being, for most of that time, as he waited to arrive onto the big stage, an avid birdwatcher, generally to be found with binoculars inside a Costa Rican hide, noting the behaviors of a rare, fiery-billed Aracan in his notebook; at which point there would be a tap on his shoulder, and he would be asked to go with the messenger-boy to the stadium in San Francisco where he would score one of his 20 goals in 14 games, then return to the birdwatching. But it’s up to you. Without the visual avalanche of 21st century content, your imagination needed to pick up the loose ends.

For sure the necessary luck needed in successful football careers must have played a starring role in getting him here. Luck without the talent isn’t much good; it wouldn’t have helped a young Robin van Persie at Feyenoord, for example, when there was an injury crisis among the senior players, if he couldn’t then have stepped up to the plate. But in Paulo’s case, it’s hard to see how luck wasn’t essential in getting the attention of Premier League scouts when you’re only playing 3.5 games of professional football per year. Fortunately for him, he was the son of a former Costa Rican international footballer, so you assume that off the back of his father’s credibility, a word in someone’s ear was said, someone came to watch, and to England he eventually came, for the princely sum of £600,000.

How did it go?
If by ‘how did it go?’ you mean ‘did he, about half an hour into his Derby County debut, in their first season after promotion, pick up the ball around the halfway line against Man United, at Old Trafford, and end the sequence by scoring the goal voted by Derby fans in 2009 as the greatest in their history?’, then yes, it went like that. Derby won 3-2.

In my recollection, Derby struggled bravely against relegation in every season of their spell in their Premier League, which I would have put at around the three-year mark. I am evidently useless at this. They joined the Premier League in 1996, remained there until 2002 – a contiguous spell longer than either Bournemouth or Watford have ever managed, and equal to Leicester. In that time, they were a comfortable 12th in Paulo’s first season, and after bolstering the ranks with all-stars like Francesco Baiano, Lars Bohinen and Rory Delap in the close season, reached an eye-watering ninth and then eighth. Paulo scored 23 league goals so Paulo was sold to West Ham.

Watching a showcase video made by a Derby County fan in 2017, I’m reminded of something, like a breath of warm air released from a long-buried part of my schoolboy mind: Paulo Wanchope was flukey. That was how we knew him. Barely any of the goals he scored indicate a honed, positionally aware approach to football that is de rigueur these days, the optimised running angles, the gegenpress – seriously, I’d love to watch a manager trying to get him to gegenpress – none of that. Instead, and perhaps in keeping with a man who seemed to prepare for the Premier League by playing 14 games of professional football in four years, it’s a more improvisational approach. Stuff happens in the box, like Lee Dixon takes a heavy touch, a defender fluffs a clearing header and Paulo always seems to be nearby, flukily, to muster a finish. If you imagine a finishing continuum whereby Thierry Henry’s hip-angled, open-bodied immaculate lasers to the far corner are at one end, Paulo’s down at the other end.

He wasn’t a natural.  Except for one, very important thing – he was a natural at not being a natural. He had a jumbled way of controlling the ball, like he never once had it truly under control, as per most of us at five-a-side. But unlike most of us, he had a wonderful ability to react quickly to wherever the uncontrolled ball went, as if he expected it to do that, and take the next touch, leaving defenders flummoxed. A shanked right-footed touch could swiftly be turned into a cute left-foot nutmeg when the defender goes for the loose ball; there’s a wonderful goal he scored against Blackburn, with a flustered Tim Sherwood in close attendance, where – and if all of this was fully intentional it’s easily Top 10 All Time Goals – an excessively forceful attempt to control the ball (edge of the six-yard box) with the sole of his right boot pings it over six feet into the air, so Paulo, seeming to want to head it across to Francesco Baiano, instead heads it down onto his own knee – he is then kicked in the hip by the increasingly flustered Sherwood – so he juggles it upwards to his right thigh, over to his left thigh – Tim kicks him again – and Paulo, realising his work his done, then lets the ball drop onto the half-volley, and bashes it in. This is Maradona stuff, except it all looked accidental. Flukey, to my schoolboy eyes.

In general, when it came to finishing, mostly he looked like someone chancing his arm at an unpredictable creative exercise, just to have a go. Derby fans loved it. I feel there’s nothing that attaches you more to a player then the feeling of a move being continued, and continued, and continued, defenders scrambling everywhere, all of your drawn-out emotion on tenterhooks, for how this zany collection of improvisation is going to end – then he scores.

And how’s this for a maverick striking partnership at West Ham: Paulo Wanchope and Paolo di Canio. But a strange thing had happened over that summer; God knows how, but the training regime of West Ham’s pre-season had turned the rough diamond Wanchope into a gleaming, cutting-edge, technically precise striker. I’m just kidding: greatest hits from that season include running accidentally into Frank Lampard’s long-range shot, immediately reacting to the newly-angled ball and mustering a finish; spurning the logical volley from di Canio’s outside-of-the-boot cross for, instead, a kind of Cruyff-turn-esque attempt at control inside the six-yard box, causing the ball to bounce off his other leg, and he then stabs it home – and some instances of the fluke, where goalkeepers from Mark Bosnich to Shay Given seem unable to summon the will to stop his badly-placed shots. It’s immense. He scored 15 goals for them in that season, and so, in their wisdom, they decided to sell him to make way for Freddy Kanoute and Davor Suker. Off he went to Man City.

Where, if you can believe this, his striking partner was George Weah. Or at least it was for his home debut, when Paulo scored a hat-trick. A very Wanchopean hat-trick, including (for goal No. 2) reacting quickly to George Weah miscontrolling the ball when trying to do something completely different, and mustering the finish, and then (No. 3) reacting immediately to his own poor first touch into the box to stab the ball home at an angle and speed that literally no-one but him anticipated. And in World Cups 02 and 06 he scored one against Brazil and two against Germany. The guy’s a legend.

And one that, it probably goes without saying, would be hard to fit into the current Premier League. There’s nothing of the system about Paulo, nothing that would mesh neatly as a tactical component. This is not to downplay his footballing ability one bit; anyone who can score 50 Premier League goals clearly has A-grade ability, and in the angles of his runs across defenders and particularly his headers, he clearly did. But he was a wildcard, unpolished and unpredictable, a joyous surprise when whatever thing he was attempting came off. Flukey as shit, too.

What was his defining moment?
It could be no other moment. On and on he goes, legs lolloping like vast jellied eels, a running style that appears to mesmerise Phil Neville as he tracks it, until all of a sudden Paulo, whose body angle is by now one you know modern coaches would call sub-optimal, is arriving into the penalty area, and he does the thing he would always do – reacts to this situation and finishes a half-second ahead of when everyone else thinks he should. You can literally see the gap, in the pointless dive Schmeichel makes, between his own thought process and Paulo’s.

And nothing can make this goal more enjoyable than watching it with the throaty, down-to-earth east Midlands commentary of BBC Radio Derby over the top, the sound of a man entirely emotionally invested in what he’s seeing and increasingly losing his shit so that when he arrives at telling you and United look absolutely second rate, it’s in the manner of someone complaining about a replacement bus service if first you’d wired them up to the mains electricity supply. Wanchope took them on down the middle, he tells us, as if there could be no more gloriously conclusive line in all of sport.

And how is he now?
As you’d expect for a man who never seemed like he was that obsessed by the whole thing, as his peripatetic career after the Premier League would indicate – six clubs in six years in six different countries – he seems peaceful, pleased by what he improvised. 14 professional games across four early years turned into goals at the World Cup, hat-tricks in the Premier League, a slew of delighted fans in his wake. Fluked it, naturally.

Lest we forget Paulo Wanchope
ADVERTISING