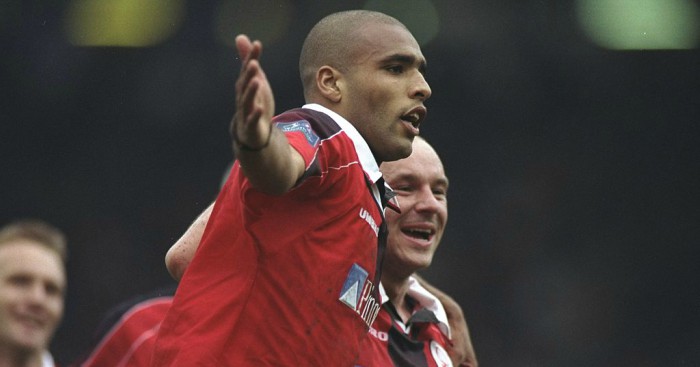 We take a look at players for whom we have a great deal of lingering fondness, sometimes for reasons unclear. We started with one Eyal Berkovic and move on to Pierre van Hooijdonk…

From where did he appear?
He cameth from Holland, and the report – on Wikipedia – of the lordly emotions that even at a young age were surging through the heart of Pierre is one of the finer things I’ve read on that site.

‘While playing in one of SC Welberg’s youth squads Van Hooijdonk became desirous of a footballing career.’

I can imagine him pausing an U-9s game against Hoogvordenspluit by picking up the ball, raising a hand to his teammates, and then informing them, when they questioned him about the stop in play:

“I am desirous of a footballing career.”

Where he came from in the minds of 90s English football fans – who could happily stretch to Holland containing Ajax, PSV and Feyenoord, but not NAC Breda where van Hooijdonk made his Dutch mark – was Celtic. There he went in 1995, after burning vast numbers of goals into Eredivisie nets. Although I’ll be honest; in my mind Celtic was where he went after Forest. After all the unpleasantness.

But I was eight at the time, and not a reliable witness. I’m now informed that he came first to Celtic, where he joined – among others such as Jackie McNamara, of whom I had a picture of on my bedroom wall because I’d already cut the page out of Shoot and it seemed silly to waste it – Paolo Di Canio. A quiet life evidently wanted by the Celtic manager.

He’s clearly fondly remembered there – and why not, who wouldn’t like 44 goals in 69? – that some 24 years later (bloody hell) the Celtic YouTube channel is still coming out with a clip of Pierre scoring the winner in the 95 Scottish Cup Final. A typical goal, where he does that thing elite athletes can do where he extends an already very large frame above the defender at the perfect cushioned angle to direct a fast-moving cross neatly to the far corner. In our real lives, that ball skims rapidly off our mistimed forehead, or we’re too small to have any chance against the defender in the first place. Well done Pierre. Off to the Premier League with you.

How did it go?
For those of you with a taste for humdrum Premier League names of yesteryear, the ones whose faces you couldn’t pick out of a line-up but whose names you’ll probably still be able to recall on your deathbed, the Forest team Pierre joined is gold. Woan, Stone, Chettle, Colin Cooper, Alf-Inge Haaland, Jason Lee, with a pineapple on his head. Seeing it now, the last one, I think it’s a quality hairstyle, but we were definitely still stuck firmly in the era when anything non-white players did was to be deemed at best an exoticism. It’s better now. Slightly.

It’s uncomfortable to talk about, but it’s simply a fact that black players expressing themselves as they pleased, drawing attention to their personalities, was still new to the Premier League. And it’s also simply a fact that Lee would later say he told his family not to come to games because of the racial abuse that got enmeshed with the piss-taking about his funny hairstyle.

Anyway, back to Pierre, who joined a team propping up the whole Premier League, managed by Stuart Pearce, who still had the Psycho tag firmly stamped on his pale forehead, and was also in his spare time Forest’s player-manager.  How did it go? They didn’t win a game after his debut in March, although they did draw six of those remaining nine games 1-1, which must have been complete agony for Forest fans. I have a feeling the fabled English sense of gallows humour would have been a pretty useful resource as a Forest fan, in the twilight of the 96-97 Premier League campaign, as they puffed to yet another stalemate, snatching equalisers, giving away leads, getting relegated.

But what’s this? A Division 1 season where Forest smashed the table, against strong competition, including a Middlesborough with Fabrizio Ravanelli, Hamilton Ricard and, unbelievably, Mark Schwarzer – he’s been around that long – and which culminated in the legendary 4-4 (7-6 on penalties) play-off final between Charlton and Sunderland at the old, beautiful Wembley? A season where Pierre scored 34 goals, including seven braces and two hat-tricks? A season where a Forest fan who in 2010 made a video of the Top 15 goals from that season – helpfully sound-tracked by ‘Sit Down’ to remind us what decade we’re in – gave eight of those 15 to Pierre? It is indeed. So back off to the Premier League we go, pausing for a pit-stop at France 98, where you may remember Pierre next to Patrick Kluivert when he wheeled away from scoring that header against Brazil in the dying seconds of the semi.

What was his defining moment?
Ever play truant at school? In the season in which Pierre played truant from work, I was 11 and didn’t feel confident enough to tell the school ‘screw you guys, you haven’t invested the type of funds in this school you promised me you would, I’m off to Holland’…but I assume I must have warmed to the idea that you could do that, if you were someone like Pierre van Hooijdonk.

I definitely remember it being on the actual news, described – in the sober fashion of televised news – as if Pierre was hiding in a bunker, peering through a slit-window with binoculars, flashing antagonistic signs at the Forest scouts, as opposed to the truth of Pierre appearing defensive but also slightly bashful, training to keep fit with NAC Breda, saying he didn’t want to come back because promises made to him by Forest had been broken.

They’d sold his Division One strike partner Kevin Campbell to Trabzsonspor for God’s sake; no greater indignity by man can be suffered. Absolute mayhem ensued, in the manner of those storm-in-a-teacup, forgotten-by-June Premier League dramas that create the background music to our lives, with words like ‘betrayal’ and ‘unforgivable’ being thrown around by hard-faced pundits with merry abandon.

Or ‘unforgivable’ if you’re not bottom of the league again, getting pumped by everyone from Charlton to Liverpool, and thus find yourselves in a forgiving mood. As United could find a way to hold their nose and allow Eric Cantona the chance to redeem himself after jamming his boot into the chest of that fan at Selhurst Park, so Forest would have Pierre back.

These Premier League clubs are almost touchingly selfless in their quests to allow players their redemption – think of the honour, the pure, almost-Mandela-like levels of honour that must have flowed in the veins of Roberto Mancini when he considered Carlos Tevez on that golf course in Argentina and decided he deserves another chance.

Upon (disappointingly to me as an 11-year old) giving up the strike and coming back, Pierre showed he was more than capable of scoring goals in the Premier League while his Forest teammates showed they were more than happy to not join in his celebrations, leaving him to wander around alone for a while like a man celebrating his divorce in front of all of her best friends. Forest were relegated again.

Pierre left that summer, and deserves recognition for what he did afterwards, when he was evidently feeling more zen. Another 141 goals all scored over the age of 30, across the top leagues of Holland, Portugal and Turkey, with some eye-watering goals-to-games figures (52 in 61 for Feyenoord, 32 in 53 for Fenerbache) and a Uefa Cup winner’s medal claimed. And he scored a goal in the semi to knock out the Inter of Ronaldo, Seedorf, Javier Zanetti and of course Robbie Keane, playing for his boyhood club.

And how is he now?
A thing that strikes me about so many Dutch players I’ve heard speak – Robben, Van Persie, Rijkaard, Van der Sar, the list goes on and on – is the level of grounded articulacy that’s as alien to their English counterparts as chalk to cheese. Interviews with Van Hooijdonk reveal the same; now that the hotheaded flush we’d all have if we were 6’4, physically immaculate and banging in goals at the top end of the world’s premier pursuit has faded, he comes off low-key rueful about his more youthful indiscretions, though not without a wry smile that recognises, as we all should, that it’s just football, nobody died. Ja, he played truant – silly him. He could have handled that better. A shiny medal to anyone who hasn’t had that thought about a thing they did at work between 21 and 35.

Beyond that though, now and then, there are hints of a lasting, taut restlessness. He was a peer of Kluivert, Bergkamp, Van Nistelrooy, playing international tournaments with each, and yet, in truth, didn’t make a mark on football in the way any of those three did, and had ample talent to do it.

With the fairest of winds behind him, he could have been a midway point between Ronaldo and Christian Vieri. But it went the way it went, and whatever it is the Dutch do to their young footballers before they emerge into the public eye means he has a sense of perspective. Whatever happened, there are worse ways to spend your youth than being Pierre van Hooijdonk.