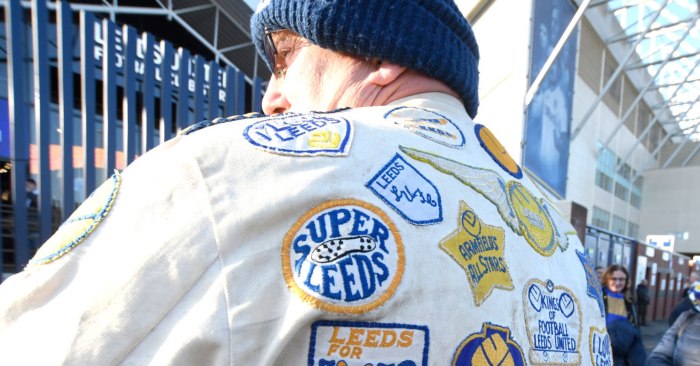 If I had to name the members of the current Leeds team, I – as a semi-interested watcher of the Championship – could name three. Or in a heartbeat I could name you every single one – starting with Martyn, Harte, Radebe – of a team I think they should have. Forest, at present, I’m afraid I draw a blank. But, though I’m sure a seasoned Forest fan would say there are more hallowed names to recall, I can swiftly call up Ian Woan, Steve Chettle, Chris Bart-Williams, the legendary (for a kid of a certain age) Pierre van Hooijdonk, to name a few from the semi-recent top-flight past. Remember when Wim Jonk, Benito Carbone and Paulo di Canio all played for Sheffield Wednesday, etc.

I can imagine for a person of a certain age, seeing Forest (as in the Forest of Clough and Martin O’Neill when he wasn’t old, or the Leicester manager) as not being on a very delayed travelator back to the big league, is impossible. They’re a sleeping giant, and you know what that means. They ‘belong’ up there.

Or you know what it did mean. Except now the reasoning for any club to be considered a sleeping giant is on thin ice. It was previously an obvious logic – a stadium far surpassing the competition, a city-dominating fanbase, as per Leeds, Newcastle, Nottingham Forest, a storied history, as per all three, which fixed them in the minds of media men of various shades of grey and sentient as belonging, via some immutable force, at the top table.

The stadium size is obviously key. Their fanbase created a stadium befitting those numbers, which has led to some mind-bending incongruities in the list of this country’s biggest stadiums. Excluding Wembley, non-Premier League teams occupy numbers 9 (Sunderland), 12 (Wednesday), 14 (Leeds), 15 (Middlesbrough) and 16 (Derby). Bournemouth, an instructive case, are number 65.

The stadium was where the money was – that was the collateral for the sense you were forever poised as a club potentially on the up. With that, the thin ice doesn’t so much break as get hit by a missile. You’ve probably noticed the money in football is no longer created by the clack-clack of turnstiles. It may even, particularly in the case of Sunderland, be a bloody great millstone around the club’s neck to have such a stadium, given its running costs in the face of dwindling gate receipts.

In my time watching football since the mid 80s, the ‘sleeping giants’ of Leeds Utd have spent the exact same no. of seasons in the English top flight as Wimbledon. And Wimbledon haven’t even existed for the past 15 years.

An authoritative-looking document I found on the internet tells me that in 2018, Leeds, population 475,000, stadium capacity 38,000, history: storied – had a turnover of about £40million. Bournemouth, population 188,000, stadium capacity 11,500, history: Harry Redknapp doing something, and not getting relegated into oblivion – had a turnover of £134.9million.

So it might be time to declare the concept of sleeping giants finished. To let sleeping giants lie. It retains no inherent logic; there is nothing in the past’s infrastructure that can contribute anything to your ability to compete in the modern Premier League, except for possibly a nebulous sense of ‘rightness’ when you find yourself towards the top of the Championship table, which might provide a little extra propulsion. Although equally, and if anything more plausibly – if the recent travails of Leeds and Derby are anything to go by – it creates pressure which you don’t need, which leaves the likes of Huddersfield, Brighton and Burnley untouched.

Of all the sleeping giants relegated in my football-watching lifetime, it seems only circumstance that allows them to return. Aston Villa and Wolves being bought by owners with deep pockets, Newcastle retaining Rafa Benitez the last time around. You could argue that appealing to owners with deep pockets is related to their sleeping giant status, and on that, I’d have to concede you have a point. We have to be wary about trying to draw too-neat bows around ‘how football works’, but no sleeping giant has awoken and returned under their own steam.

Because what seems beyond argument is that once you slip through the gulf between Premier League and Championship, the gap between them and you grows exponentially. Leeds, arriving in the Premier League, would no more ‘belong’, with the squad they’d likely have, than Preston or Bristol City.

We can all recognise what we’re seeing, that we’ve done something a bit unholy with the Premier League. That is, create a level of such eye-watering, gargantuanly funded quality, alien to the league below, that newly arrived clubs generally feel compelled to do that dreaded thing – ditch the Championship-standard players who got you there, and bet the farm on a thrown-together collection of punters like Trezeguet and Andre Schurrle, who may or may not be up to the task.

Of course, football being what it is – unexpected, prone to rewarding surprise package, tightly-knit teams, you often survive your debut season, almost always with a group that closely resembles the one who came up – caveat Villa – but establishing yourself for any longer is a pretty rare occurrence. Huddersfield, Stoke, Brighton, Swansea, Cardiff, West Brom, Norwich, Sheff Utd are teams who feel forever destined to almost get a claw-hold, and then slowly feel the table drag up above them.

In terms of the specifics for why they can’t stick around, it’s ultimately a question of strikers. Nothing sends a struggling club more into rigor mortis than the sense you just can’t score in the Premier League, and the reality is that unless you have the nous and fortune to unearth a Jamie Vardy or a Callum Wilson, and then keep hold, you’re probably destined for that most egregious pathway: trying to make one of ‘those’ strikers cut it in the Premier League.

You know the ones. David Nugent. Jermain Beckford. Sylvan Ebanks-Blake. The updated versions, cursed anti-goal matter, Che Adams and Olly McBurnie, scorers of more than 30 goals between them in the Championship last season and one between them in the Premier League so far.

If you opt to try foreign markets, then it’s got to be someone who has escaped the Premier League scouts and is within your budget, and doesn’t immediately tell their agent to alert Everton or West Ham. And if they do show up with an unexpected goal tally, you’ve got to convince them to stay on their wages beyond the summer. Thus far I wouldn’t judge any striker bought by any club in the bottom seven over the summer to be anything beyond mildly useless, which covers £39million for Joelinton and £20million for Neal Maupay.

You could imagine Steve Bruce adding another 60 years of theoretical aging to his face and still be sat in his press conference saying “we’ve got to give the lad time”. It feels like the pressure on scoring goals in the Premier League, compared to the Championship, or lesser European leagues, is akin to the difference between fronting a Marvel blockbuster and doing analysis on Match of the Day. That’s not to belittle the latter as I couldn’t score a single goal in any one of them; it’s just that the Premier League is insane.

What’s interesting is the approach taken by clubs in the Championship who are not ‘sleeping giants’, and thus won’t be attracting foreign investors with that mix of misty-eyed possibility and bloodthirsty capitalism, but want to try to navigate a route nevertheless. A new kind of football is being introduced – I can’t claim to watch the league enough to even pretend authority, but I am told: more tucked-in-shirt than the baggier stylings of before. The directors of both Norwich and Huddersfield have spoken of the need to run a tight, analytical ship, take few risks, have a manager without airs and graces who’s ruthlessly focused on creating an efficient team unit, with a sprinkle of quality…so, a German.

The Norwich director was also forthright about the necessary limits of the club’s ambition when he took over after their most recent relegation. It’s not impossible that such an atmosphere, of trying to sensibly live within one’s means, creates a smooth upward curve of a kind you sense Leeds – with its constant itch of thwarted, historic grandeur, clutching for the giants of its past – might find soothing while it irritably sleeps.