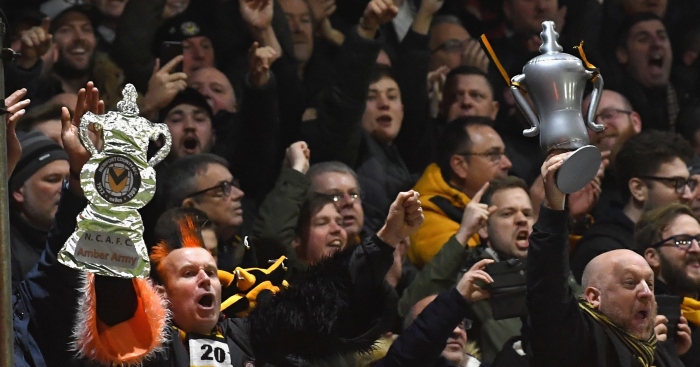 Wherever you stand on the spectrum of affection, from total disinterest to romantic belief, there is no doubt that for good, or bad, it is not what it once was. But that’s fine, nothing is. Everything moves on and we need to move on from the FA Cup. It’s a different world now, with different needs and pressures to when it was something everyone wanted to win.

Hypocritically, the FA Cup trades off its history and traditions but can’t or won’t honour them. Only 10 of 32 games kicking off at Saturday 3pm in order to accommodate various global rights holders was a classic example of this. All the heft and weight inculcated by a big schedule of games was lost. There was a palpable lack of third-round vibe. As the seven 5.30pm games played out, it it felt as though everyone just wanted it to be over. But there was another day to come.

Every club used to take it seriously and now they don’t. Clubs always played their best side and now the top two divisions almost never do. Why? Money. Being in the Premier League makes you one of the top 30 richest clubs on earth, but win the FA Cup and you get £3.6 million, which will probably be eaten up in two months by your highest-paid player.

Money matters more to clubs than anything. So how can any competition have any credibility when many of those taking part are not trying their hardest to win it?

A team other than Man Utd, Man City, Liverpool, Arsenal & Chelsea has won the FA Cup twice in the last 23 seasons so Leicester made the right decision to rest some key players.

Fans universally loved the cup, but now many just don’t care at all. TV and radio people can go on all they like about how great the cup is, but many are just not buying it. It always pulled in big crowds and now it often doesn’t. Winning the cup was THE most glamorous achievement of any season and now, absolutely no-one thinks it is. Back in the day, no-one minded replays; in fact, they all added to the excitement. A second or third often became legendary, but today a replay is always “the last thing they want” as though it’s a burden, as though not losing is actually losing.

Pitches used to vary massively in quality, some all sand and mud, thus creating a variable skill-leveling factor. But that’s rarely the case now and if a rough pitch does exist, it is even thought a bad thing and anti-football.

Income disparities between the various tiers were once much more narrow, giving lower-league sides more chance of victory. Now there is an absolute gulf. While lower-league sides do beat higher-placed teams, it is almost always because the bigger side hasn’t played its first team and has ‘rested’ players, thus hugely reducing the achievement. We are invited to pretend this is still a giant-killing, but in our hearts, we know it isn’t. It isn’t Colchester beating Leeds United in 1971. The expression “they’ve put out quite a strong side” is a very telling modern-day media apologia.

It used to be solely on terrestrial TV, now it’s not and it never will be again. They do great programmes, but BT Sport are sharing the broadcast rights with the BBC and BT audiences are small. The Spurs game on Friday night got an average of 357,000 viewers with a peak of 540,000 – approx 10% of the BBC audience. And yet they still picked Manchester United’s thoroughly heart-numbing game against Reading to broadcast, presumably to attract the largest numbers of viewers, despite it being one of the least interesting. A commercially driven choice and not the right choice.

Third round day was also special because it was one single programme of unique games that all happened at the same time and were all governed on the same basis, but now with nine of 32 games deploying VAR, that can never ever be said again. It is forever fractured. Broken into pieces, never to be put back together, the sense of community evaporated. Let’s not pretend football is as it was. This is a cheaper but much more expensive version.

And yet still they drag out the FA Cup as though all of these transformations have not even happened. It doesn’t matter how many clips of Ricky Villa or Ronnie Radford you show, now is not back then. The reason those clips are legendary and thrilling is because those games were rooted in a different time when the FA Cup genuinely mattered and didn’t need selling to us. Trying to illuminate today’s darkness with the glow from those distant suns only serves to illustrate how things have changed.

It’s called The Emirates FA Cup, the sponsors’ name preceding the tournaments’ and that symbolises much. Football lies prostrate and desperate at the feet of television’s money, knowing the price of everything but the value of nothing, seemingly so hungry for cash that it is intent on killing the goose that lays the golden eggs just for one last big meal before their own execution.

We now have a media intent on the overselling of ‘giant-killing’ as the be-all and end-all cup USP. It is massively misplaced. You simply can’t go from match to match forever asking “is this going to be the shock result? Is this one? Is this one?” and maintain it as an actual shock if it does go the way of the smaller side. But so obsessed are some with this that they want the top sides to be automatically drawn away so as to increase the chance of ‘a cup shock’. How could it ever be a shock when you’ve done all you can to contrive it to be so?

Make the PL top ten all play away in 3rd and 4th round. Harder to rest a full team then.

All the talking up of the underdog games is getting embarrassing. “What a story that would be,” said Jonathan Overend on Radio 5 Live at the prospect of Rotherham beating Manchester City at the Etihad. He’s not wrong, in the same way a five-legged pink horse doing origami would be a big story and equally as likely. It ended 7-0.

I feel sorry that they’re charged with pumping up the “it could happen” quotient so much. Listen to how many times the word ‘story’ is said. It is too knowing, too contrived, overcooked and over desired.

Let’s not pretend that it doesn’t deliver some fun each year though. It is, after all, football and that’s what football does all the time. But even as Newport County got their winning penalty, 5 LiveConor McNamara had to use the moment to defend the competition: “Anyone who thinks the FA Cup has lost its magic should be at Rodney Parade now.” And of course no-one wants to churlishly deny them their moment of joy in beating Leicester reserves, but wins by them, Gillingham, Barnet and Oldham are fig leaves for the FA Cup to hide behind.

The fact is, absolutely any cup competition will produce unlikely results, the FA Cup is not special in this regard but seems deified for it for no good reason. It is not visited with anything unique.

None of us want to be without those type of victories; we just want them to happen, as they once did, in a competition that everyone is trying their hardest to win by playing their best teams. Not in one where sides have tied one arm and leg behind their back in order to rather pathetically rest the other half.

There’s no point in continually trying to blow on the ashes of a burnt-out concept to reignite them. The real FA Cup has gone to join the choir invisible and all we’re doing now is trying to nail it to its perch to pretend it’s still alive.

We shouldn’t be afraid of change. We should embrace it. So let’s end the pretence, consign the FA Cup to history and replace it with an exciting new competition, drawn up in consultation with fan groups which works for fans first and TV audiences second. A cup we can believe in, uncoupled from any traditions, unconnected to golden memories, not in the shadow of the sun so many wilfully turned their backs on.

Today’s FA Cup is pretending to be something it isn’t. It is but a ghost of a long dead, fondly recalled relative, now leeching off its own history, riding on the back of what it once was but isn’t anymore and can never be again. To pretend it’s still alive and well and we’re all still in love with it is to abuse the cadavre in an act of sporting necrophilia.