Home Arsenal Let’s talk about Liverpool and all their luck… 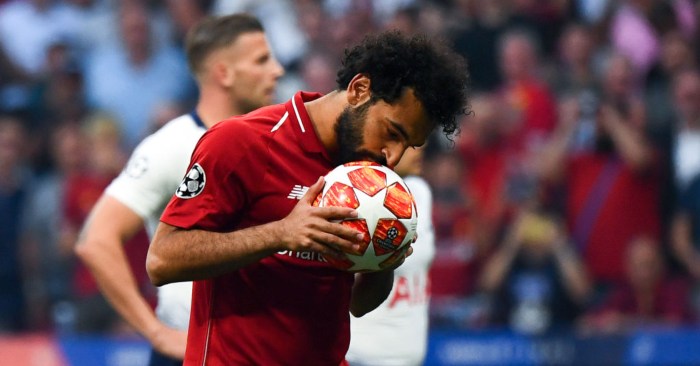 Mails are thin on the ground because, well, sod all is happening. If you ever wanted to be in the Mailbox, now is your time; mail us at theeditor@football365.com

Jurgen Klopp is obviously a good manager buuuut…
Now, I am fully aware that luck plays a huge part in sport and I can recognise that Jurgen Klopp has built a well-rounded team that plays attractive football. I think this may have been mentioned before, but Liverpool had a very generous helping hand this season.

I am not calling conspiracy, but it is frustrating how the pundits seem to back them blindly.

Yes, the rules say that they should have had a penalty the other night, but it is an enormous stroke of luck that Sissoko’s hand was in that position in the first place. Especially so early in the game.

A HUGE decision just 22 seconds into the #UCLfinal 😳

This was the penalty awarded to Liverpool after Moussa Sissoko's handball… pic.twitter.com/FypjV9GMNA

Like many of Salah‘s extremely soft penalties throughout the season. But that’s the game these days.

The Barcelona comeback was good and they were smart, clinical and pressed well, but they DID catch Messi and his mates on a bad day (plus haven’t Barca lost badly a few times? Their defence isn’t great.)

Liverpool had a tough group but they squeezed through on goals scored (I think).

In the league (I know they didn’t win it, but it’s worth noting), I remember them squeaking through a couple times (Everton at Anfield?)

I know it’s all forgotten and trophies count…

Luck always plays a part (United ‘99, City ‘12, any penalty shootout…) but I just think it’s interesting, how I haven’t seen much mention of this, by pundits, of this Liverpool side.
Matt (still not bitter and I am not a Spurs fan.)

Will Arsenal and Man United drop out of a Top Four?
I just read an article in another publication about the Champions League broadcasting rights increasing by 50% for the 2019-21 seasons. Is it just unfortunate timing for Arsenal and Utd in dropping out of the top four or will this establish a new Top Four Premier League tier? In addition, with Utd’s share price falling by over $25 from last year could this be the worst possible time to miss out on Champions League qualification when there is more money in it?

The teams that will benefit and would be expected to continue in the Top 4 are Man City, Liverpool, Chelsea and Spurs. Or will Spurs as that team start to break up/weaken in this transfer window? Does this equate to possibly three teams (Spurs, Arsenal and Utd) battling it out for one Top Four Champions League spot? We all know Utd got in through the back door before, and a Europa Cup win seems the easier way of qualifying this time again for both Arsenal and Utd.
Daniel Kelly

Is football about to implode? Well no…
Hey Rory, Cape Town.

I see your point, I really do. All I would suggest is that you check how many supporters are on each club’s season ticket waiting lists. Makes depressing reading really, literally tens of thousands of people waiting in the wings until someone ‘loses faith’ and cancels their ticket.

People queuing up to give you their money and be ripped off? It’s a capitalist’s dream, and no surprise why so many foreign investors are buying our clubs, it’s licence to print money.

So I don’t think that people will ever lose faith in the game, if anything, it will grow. Even I (chief grumpy arse) admitted to really enjoying this season of football and if I can be kept interested then there will be billions more all around the world who will too.

Plus sport is essentially war without the guns. Nice to see Afghanistan playing at the World Cup, plus Iran at the last football one. I believe Iraq now have a football team which means that hopefully, soon, Syria will have a football team. If anything, sport, mostly football, will have a role in building relationships once the IS threat has fully abated.

I can therefore only see further commercialisation of sport as people use it for political and financial gain.

All the best
Fat Man (Sissoko gave Liverpool that win – yes Yaru, Malaysia, you are right)

Some homegrown bargains this summer
There’s a huge summer of transfers ahead for Premier League clubs. I thought I’d scour the Big Six Bargain Basement for some of the English players destined (or desperate) to move on, and have a guess where they might end up. Some are out of contract, others out of their depth. Let’s have a look…

Danny Welbeck – Limping in to his late 20s with a questionable fitness record and a bucketload of unfulfilled potential. Dat Guy’s got West Ham written all over him.

Adam Lallana – Needs regular football for any chance of making the Euro 2020 squad, but Liverpool look to have outgrown him. Leicester need experience and depth in their attacking/wide positions, so expect a reunion with old boss Brendan Rodgers. Failing that, Southampton would happily take him back, and he’d certainly love Hassenhuttl’s style.

Fabian Delph – not a left-back. And Pep has finally turned his back, in favour of the zippy Zinchenko. Expect City to strengthen in that area in the summer, so Delph will finds himself in a similar spot to Lallana. Perfect for Spurs, who need to add numbers to their midfield, and to their HG quota (not to mention title-winning experience). Still a year left on his deal, so remains to be seen if City would sell to a fellow top club. A Villa reunion may make sense.

Danny Ings – Showed moments of subtlety and deft touches you wouldn’t have believed during his Saints loan spell. Seven league goals this season and with plenty left to give, he’ll have his pick from a plethora of clubs in the summer unless Saints have already snapped him up (they have – Ed).

Gary Cahill – A super servant to Chelsea, who would add steel to any middling club looking for stability. Wouldn’t be shocked if he stayed in the capital, so Palace or West Ham would be likely destinations. Strong mentality, defensively sound, and a leader – Roy Hodgson’s wet dream.

Phil Jones/Chris Smalling – Surely the end of the road has been reached for at least one (if not both) of this hapless central defensive duo at United. With expected reinforcements arriving, the purveyors of grit and gurning could be replaced with the extra quality that Ole needs. Any bottom-half club will do. Random guess – Smalling to Newcastle.

Danny Drinkwater – Has a contract until 2022, but has failed to play a single PL minute this season. It’s hard to see him staying at Chelsea, but equally difficult to see any potential destinations for him. I’m sure the money was worth it.

Nathaniel Clyne – Needs a move, having been usurped by the excitingly talented Alexander-Arnold. A permanent deal with Bournemouth is on the cards.

Daniel Sturridge – Quite incredibly fit and healthy, but out of contract. A West Midlands boy, so with Wolves holding a large bag of cash and looking for attacking reinforcements to supplement a Europa League campaign, he seems like an obvious choice.

Carl Jenkinson – 27 years old. Bloody hell. Out of contract in the summer. The new back up RB at Sheffield United?
Rob S

Kane over Le Tissier?
Not having it. Not at all.
Kevin, ITFC, Vancouver

When social commentary from a football website is more to the point than mainstream media https://t.co/IaCd0RWueo (whole article is a daisy tbf @F365) pic.twitter.com/uUDdDs1a1D