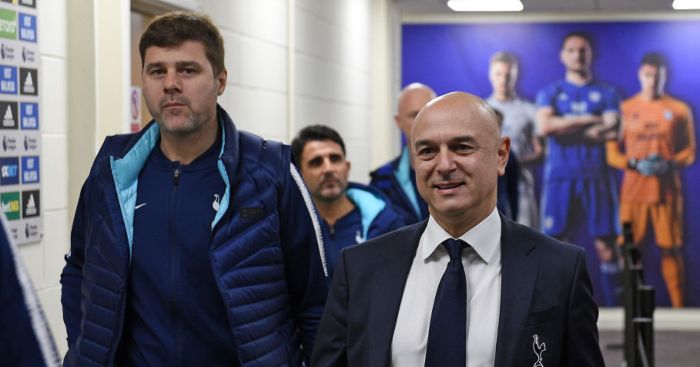 Tottenham chairman Daniel Levy has opened the door to Mauricio Pochettino returning to the club one day.

Levy sacked Pochettino in November less than six months after the Argentinian led Spurs to the Champions League final following a poor start to the season.

He admits it was a gut-wrenching decision to remove Pochettino, who had turned the club into one of the best in England during his five-and-a-half-years at the helm.

Pochettino hinted his and the club’s paths would cross again and Levy appears to think similar.

“You have to understand I had built up a personal relationship with Mauricio over five-and-a-half years,” Levy told the Evening Standard.

“It is not something I ever wanted. Personally, it was incredibly difficult, I told him that and he understood.

“He’s been in football (a long time), he understands. It’s not personal and I’m sure he’ll come back stronger and get an opportunity to manage another great club. Maybe one day he’ll come back to us.

“I’m not going to sit here and analyse the past. It’s not productive.

“Mauricio did a fantastic job for us, we are very grateful. I wish him all the best for the future.

“I’m still in contact with him. My relationship is very good with him. It just got to the point where it felt we needed a divorce.”

While Arsenal and Everton have taken their time in their in search for new managers, Levy moved on from Pochettino to Jose Mourinho in less than 12 hours.

“Many years ago, I can’t remember exactly, we were linked with him,” Levy said. “But I’d never spoken to Jose. We never had a conversation.

“And his availability was totally unrelated to Mauricio, not connected at all.

“I can’t remember when I first spoke to Jose, but once I made the decision in my mind we had to make the change, although internally we knew of more than one candidate who would have been interested, Jose was absolutely number one.

“We had a number of discussions. Firstly, it was such a hard decision and you never know what you are really getting until you work with somebody.

“There are lots of perceptions out there in relation to Jose that I’m not sure are true.

“I wanted to spend some time with him so we were totally aligned, on the basis there was no point him coming to a club where he expected different things to us.

“And we were totally aligned on the strategy going forward.”