Home All The News Lewandowski ‘would consider’ Prem move – report 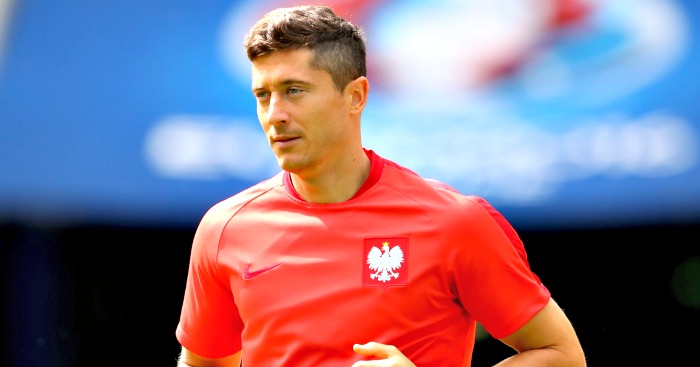 Poland striker Robert Lewandowski “would now consider” a move away from Bayern Munich, according to a report.

The Daily Mail claim the prolific frontman ‘is growing increasingly unsettled at Bayern Munich and would now consider a move to the Premier League’.

The 27-year-old has been linked with Real Madrid, Manchester United, Manchester City and Liverpool in the past, but now he is contemplating life away from the Bundesliga despite holding talks about extending his contract in Bavaria.

The paper claims Lewandowski has ‘told friends’ he is willing to listen to other offers and those are likely to be numerous with the player believed to be interested in teaming up again with Jurgen Klopp at Liverpool.

Lewandowksi spent four seasons at Dortmund before his contract expired and moved to Bayern in the summer of 2014. He has been hugely successful in Bavaria and has scored 67 goals in 100 games for the German champions and 47 goals in 57 Bundesliga starts. But if the report is correct and the player is “in need of a new challenge” then there will be an all mighty scramble for the Warsaw-born striker.

His current club though rubbished reports he could leave the club this summer earlier this month with Bayern technical director Michael Reschke insisting they will not let the player leave.

“I can say with certainty that Lewandowski will play for Bayern Munich next season,” he told Radio CRC.

“His contract expires in three years’ time, he’s the best striker in the world and there’s no chance of him being sold.”

Arsenal, maybe? Or Chelsea? Either of the Manchester clubs? Middlesbrough? Who bloody knows?