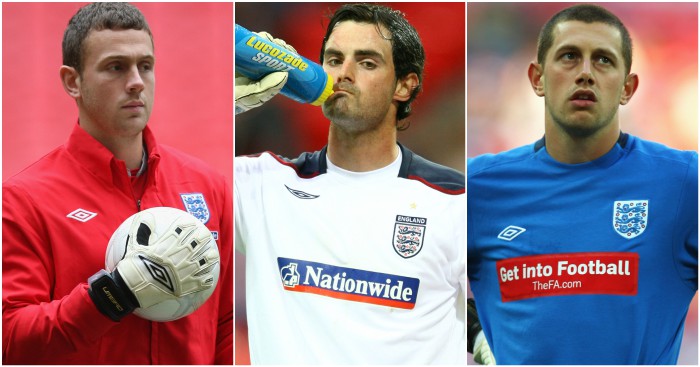 Joe Lewis
The then-Peterborough record signing was called up to the senior squad and named on Fabio Capello’s bench in May 2008 after 46 Football League appearances with Posh, Stockport and Morecambe.

That was as good as it got for Lewis, who helped Peterborough win back to back promotions before almost disappearing from view. Everton, Tottenham and Fulham were all linked with the 6ft 5in stopper, while Posh chairman Darragh MacAnthony said of QPR’s interest: “QPR couldn’t afford to buy Joe as they don’t spend a lot of money on transfer fees and to be honest if Joe were to move in the future it would be a top club in the Premier League.”

After leaving Posh on a free, Lewis went to Cardiff where he played five games, before loan spells at Blackpool and Fulham. The 29-year-old is now halfway through a two-year deal at Aberdeen, where he enjoyed a positive season as the Dons finished second in the SPFL and runners up in the Scottish Cup.

Frankie Fielding
Fielding was fourth-choice goalkeeper at Blackburn behind Paul Robinson, Jason Brown and Mark Bunn when the then 22-year-old sat on Capello’s bench in August 2010 for the friendly against Hungary. By that time, he had almost 100 league games under his belt, but at a level no higher than League One with the likes of Rochdale, Northampton and Wycombe.

It wasn’t a one-off. Fielding was back in the senior squad a year later, replacing the injured Rob Green for Euro 2012 qualifiers against Wales and Bulgaria. Highlighting the dearth of England’s goalkeeping options at the time, Fielding was one of two Championship keepers in the squad for both of his call-ups, with David Stockdale and Scott Loach also receiving scarcely believable call-ups.

Fielding eventually left Blackburn on a permanent deal to join Derby, where he lost his place to Lee Grant and was subsequently allowed to join Bristol City. The 29-year-old spent last season battling for the gloves with Fabian Giefer, whom the Robins signed on loan from Schalke.

Scott Loach
The then-Watford keeper had played 78 Championship games when he received a call-up to the senior squad for the friendly against Hungary in 2010. Loach sat alongside Fielding on the bench for the 2-1 win, with international recognition leading to reports of interest from Tottenham.

Loach was back in Capello’s squad a month later when Scott Carson pulled out of the Euro 2012 qualifiers against Bulgaria and Switzerland, but that was as good as it got. Loach admitted his form dropped and, after losing his Watford place to Tomasz Kuszczak, he was sold to Ipswich, commencing a slide down the divisions. He was last seen playing on loan for York in the National League and was part of the Minstermen team that was relegated to the National League North on the final day of the season.

Having been released by Notts County, Loach, now 29, signed for Hartlepool, where once again he will play in the National League next season.

Alex McCarthy
McCarthy at least had Premier League experience to call upon when he received the senior call in May 2013 for friendlies against Republic of Ireland and Brazil. But the Guildford-born goalie has failed to push on since.

Since leaving Reading in 2014, McCarthy has had three different Premier League clubs in three years, but the 27-year-old has made only 10 appearances during single seasons at QPR, Crystal Palace and Southampton.

That didn’t stop Sam Allardyce calling up McCarthy to replace the injured Fraser Forster for his single match in charge of England, but since joining up with Big Sam’s squad, the keeper has played only two EFL Cup matches and another in the EFL Cup.

David Stockdale
Having been named in the Championship Team of the Year last season thanks to his contribution to Brighton’s promotion success, Stockdale has enjoyed more longevity at a higher level than anyone else on this list. Indeed, the 31-year-old seemed set for another crack at the Premier League with the Seagulls until he made a somewhat surprising free transfer move to Birmingham this week. Though he can hardly be classed as ‘forgotten’, he certainbly hasn’t fulfilled the potential many identified in him when he was a regular around senior squads in 2011.

If Stockdale was to receive an England call-up now, it may even be more justified than his selection in 2011. The then-Fulham stand-in was named as an unused sub on five occasions by Capello, while he had to pull out of the squad for the friendly against Switzerland in 2011 due to his wedding the following day. His next call-up came for the friendly against Holland in August 2011, which had to be cancelled due to rioting in London.

Brighton have known to plan for Stockdale’s departure after their best and final contract offer was rejected some weeks ago. The lifelong Leeds fan was linked with a move to Elland Road but has instead accepted the offer of a three-year deal from Harry Redknapp at Birmingham.