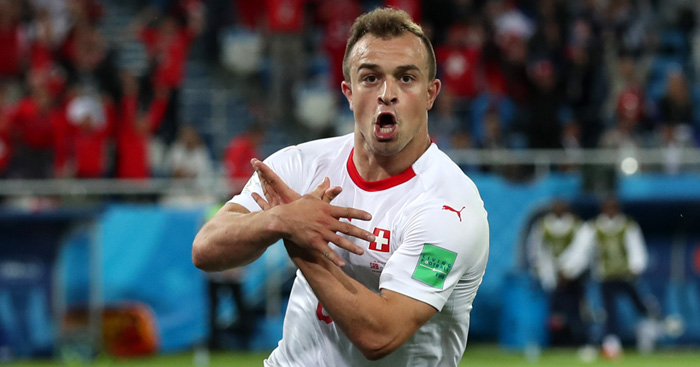 Xhaka and Shaqiri, who scored Switzerland’s goals in the 2-1 win, were charged on Saturday after they celebrated by putting their hands together to form a double-headed eagle similar to the one on the Albanian flag.

This nationalist symbol risked inflaming tensions in the Balkans among Serbians – who do not recognise Kosovo’s independence – and ethnic Albanians.

On Sunday, FIFA announced Lichtsteiner has also been charged having joined in with the celebration.

Stoke midfielder Shaqiri was born in Kosovo and Arsenal’s Xhaka was born to Albanian parents who were originally from Serbia.

His father was a political prisoner following the 1968 student demonstrations in Yugoslavia against the communist government in Belgrade. Xhaka’s brother Taulant plays for Albania’s national side.

Serbia are also in hot water with the world governing body, with Serbian Football Association president Slavisa Kokeza and coach Mladen Krstajic facing charges over comments made after the same match. Kokeza had told BBC Sport Serbia were victims of a “brutal robbery” and claimed FIFA had directed officials to favour Switzerland.

A FIFA statement said: “The FIFA disciplinary committee has opened disciplinary proceedings against the Swiss player Stephan Lichtsteiner for a goal celebration during the match Switzerland vs Serbia.

“In relation to the same match, disciplinary proceedings have been opened against the president of the Serbian FA Slavisa Kokeza as well as the national coach Mladen Krstajic for statements made in the aftermath of the said match.”