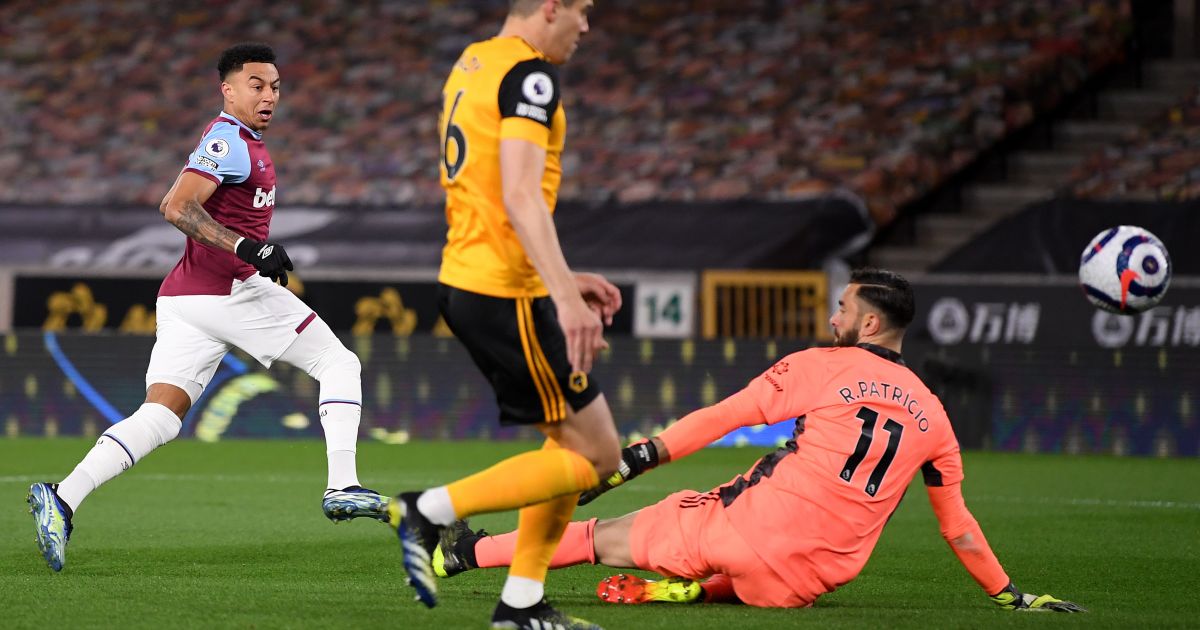 The last year has delivered plenty of unlikely storylines, and most of them have been f***ing awful. This one’s among the least likely but also least awful.

On a weekend when so many of their more celebrated top-four rivals contrived to make a rare old bollocks of things – from Chelsea’s inexplicable and unforeseeable capitulation against West Brom to more predictable yet no less welcome bed-sh*ttings from Spurs and Everton – West Ham (just about) avoided a similar fate and cheerfully hopped back above Chelsea, Spurs and Liverpool to get back into the top four. They could actually do this.

The striking thing about this game beyond its impact on the table was just the sheer dizzying array of very lovely goals indeed. It started on five minutes when Jesse Lingard ran at some open grass and then, using Michail Antonio and his clever defender-dragging run across the edge of the box by not using him, running into some more open grass before lifting a shot over Rui Patricio. Pablo Formals added a second that was very good indeed, a smart finish after another lovely trick from That Man Lingard, but comfortably takes the prize for the game’s least glitzy goal. Jarrod Bowen stepped off the bench to score a stunning third, before Wolves got involved.

Like Arsenal a fortnight ago, they were able to trim the deficit before half-time. That came from an absolute Lingard of a run from Adama Traore which ended with a picture-perfect cross and thumping Leander Dendoncker header. Wolves made it 3-2 to set up an excruciating final 20 minutes for West Ham with another beautiful goal as Pedro Neto expertly picked out the run of Fabio Silva, whose touch and finish was as secure and clinical as you could wish to see.

This was a really, really, really good game of football, is what we’re saying here, and it was punctuated by several absolutely wonderful moments from several different players on both sides.

Given that, it’s remarkable how effortlessly Lingard still dominates it. This must already be one of the most successful loan moves ever, a player who ended last season as the punchline to bookie banter and is now being dubbed Messi Lingard by the bantermeisters of Football Twitter. This was a phenomenal display. Even if he’d only scored that opening goal, it would have been enough. That he was then the key creative force behind the second and assisted the third took this to Harry Kane levels of all-round dominance – an assessment added even greater weight by the sight of an exhausted, cramping Lingard still trying to do everything for his side and run the ball into the corner as stoppage time ticked agonisingly, impossibly slowly away. To cement the comparison further, Lingard’s goal and assist take his West Ham goal involvements to nine since his loan switch; Kane is the only player who can match that number over that time period.

But even West Ham being in the top four and Jesse Lingard being the man leading them there aren’t the maddest things about what is happening to the Hammers right now. For that you have to look at who wasn’t there. This victory was achieved without Declan Rice, perhaps their best player this season who has just spent the last fortnight cementing a starting spot for England. Bowen didn’t start, and when he did come on it was because Antonio limped off. West Ham aren’t just challenging the top four with a squad that should be nowhere near and a manager everyone – and we’ll cheerfully include ourselves in this huge, globe-spanning group – thought was a busted flush; they’re doing it without even being at full strength. And while playing absurdly watchable if often slightly high-wire football.

Whether they eventually finish in the top four or not – and there’s two sides to that, the first being obviously it would be no disaster if they didn’t but the second being when will they find themselves with this sort of chance again – isn’t the real quiz. This is a redemption story. A club, a squad, a manager and a loanee proving absolutely everyone wrong. Whatever happens over the closing weeks of the season, it’s job done on that front.

Fourth place would be a nice cherry on top, though.