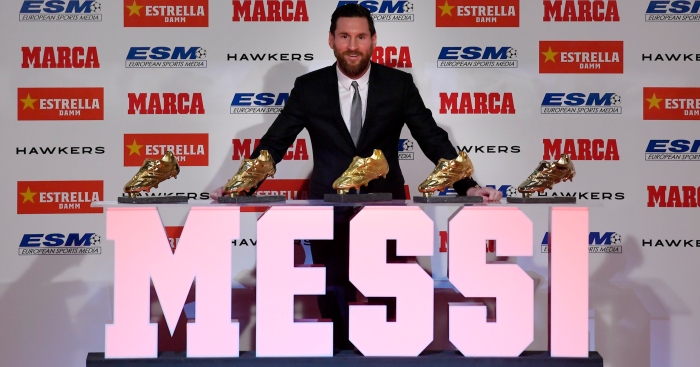 Every once in a while on Twitter, amid the trolling, Russian bots and all-round general dickishness, something pops up on your timeline which fries your tiny mind.

That happened on Friday morning, and we have Aaron Duckling to thank for that. Thread…

Thread: An absurd stat about Lionel Messi. In the 11 full seasons from 08/09 to 18/19, he scored 561 goals in 577 games for Barcelona, good enough for 0.97 goals/game over 11 seasons. That, quite obviously is good. But how can we make this even more ridiculous than it already is?

All that, frankly, is mental. We are seriously in danger of becoming complacent to the GOAT’s genius.

But we like few things more than pissing on chips here at 365 Towers. So in a not-at-all-scientific way, we set about finding a group of players who could match Messi’s ridiculous feats.

We started looking in the Premier League for some context. We found the 11 highest-scoring Premier League Golden Boot winners and told them to bring their dinner. Includes all club goals in all competitions…

The very best the Premier League has to offer can only muster up 0.82 goals per game between them. Messi is over there banging in 0.97 goals per game by himself over 11 sodding years.

So we widened the net. Very f**king far. Moving from the best the Premier League has offered over the last 27 and a half years to the highest goalscorers anywhere in the world ever.

The RSSSF has a list of the most prolific goalscorers of all time, in which Messi sits seventh. It’s headed by a Hungarian chap named Josef Bican who apparently scored 607 goals in 406 games in a 25-year career, most notably for Slavia Prague. In one season, he apparently scored 57 goals in 26 games.

The list features a few other names about which details are even more sketchy so we have omitted some. Soz, Ferenc Deak, Tulio Maravilha, Arthur Freidenrich, and Ernst Willimowski.

These strikers, among the most potent the world has ever seen, combine for a career average of 0.86 goals per game. A reminder: for 11 years, Messi has averaged 0.97.

📅 #OnThisDay in 2007, a 19 year old Lionel Messi mugged off the entire Getafe team with an incredible solo goal that was voted the best in Barcelona's history 🌪pic.twitter.com/9Q1oxwxoBC

But we are a determined crew when it comes to belittling someone else’s achievements. And we found a way to put Messi back in his box.

We took the best season each of the 11 on the list above had in their entire careers, combined them all and finally we have formula for outperforming Messi.

So, to outshine Messi over an 11-year period, we had to go looking for the absolute best strikers in the game at their peak and combine them.

As Aaron Duckling says, ‘maybe he has earned the right to do and say whatever the f*ck he wants?’ Even if it is to join Manchester City on a free…