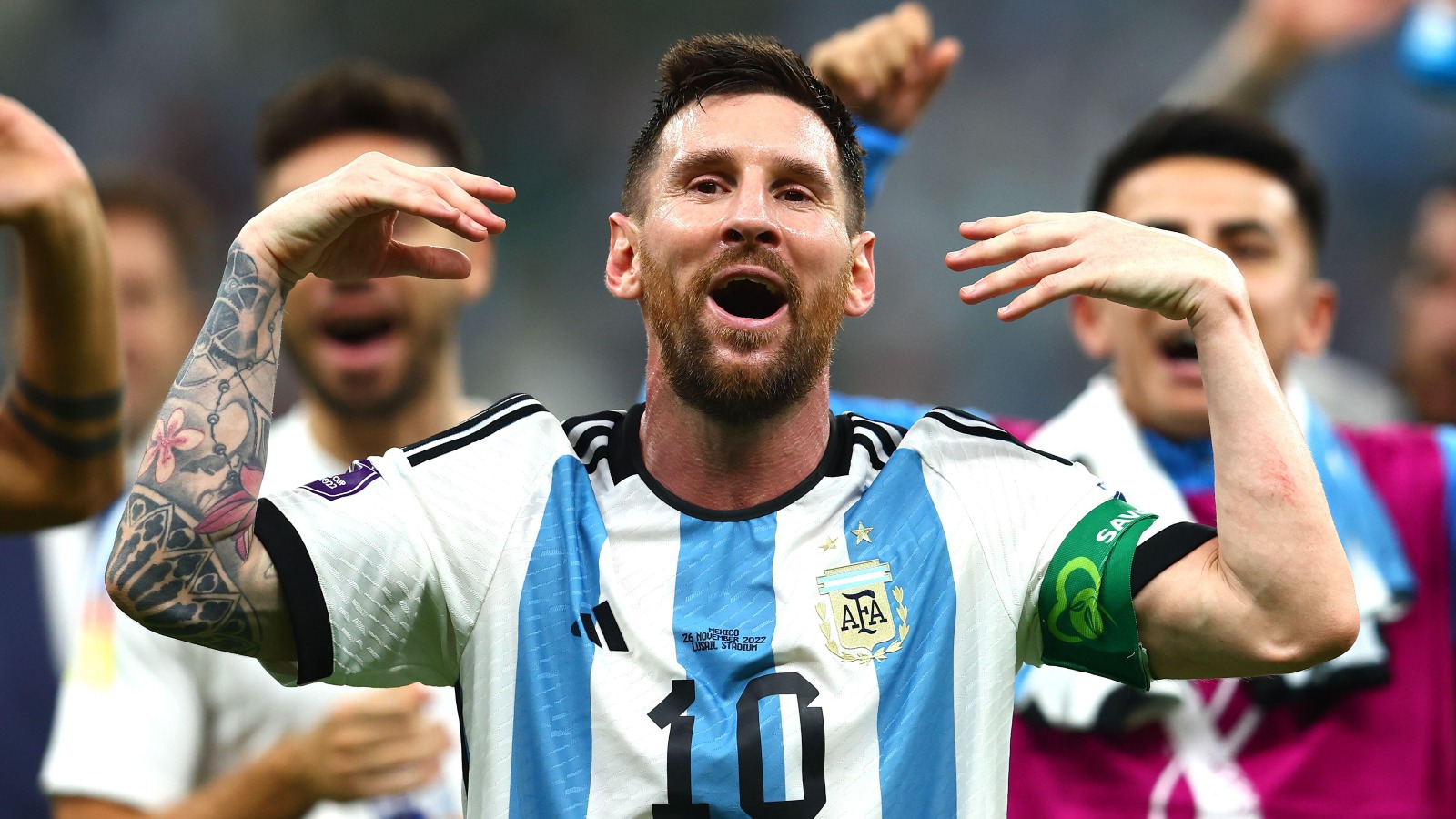 The Mailbox is baffled by the Lionel Messi adulation, as Louis van Gaal is praised and Southgate just needs to avoid the brain farts.

What has happened? Is it:

B) Lionel Messi, unmarked on the penalty spot has tripped over his own feet and miskicked his shot which has rolled out slowly for a goal kick just before it went for a corner.

If you answered “B”. Commiserations. You are Danny Murphy.

Messi worship
Not getting all the messy Messi worship during the Arg-Aus match. Australia were done by poor goalkeeping. Messi’s goal was a well placed pass into the net. Keeper sees it late, but should have gotten to it. But for some reason none of the pundits can admit it was anything but sheer brilliance cuz it was the little man-god who scored. Argentina’s second was practically an own goal. Interested to see how they do against a proper side. Judging by the way Australia were able to pass through the Argie press, I look forward to seeing what Gacpo and co can do against their tired-looking side.
Robin Molinski

USA positivity and Van Gaal praise
Well, not what USA fans had hoped for but I want to give credit to Van Gaal.  He knew exactly how he wanted his team to play against us.  Absorb pressure, allow us to wear ourselves out (again) and then hit us on the counter.  To be fair, our midfield was nowhere to be found on the first and Dest fell asleep for the second which was too bad as he was playing very well up until that point.  Robinson in no-man’s land on the third and that was all the Dutch needed.

Had you looked at the final score without seeing the game, you’d have thought that they bossed us all over the park when they really didn’t.  In fact the USA was all over them for stretches of the game.  But Holland were calm, cool, and collected and did what they had to do at their end of the field as well as ours.

The biggest difference though?  At that level, you must take the few chances you get.  The Dutch were excellent in that respect while we were poor.  Had Pulisic scored his first minute shot, could things have been different?  Possibly but again, we were poor defensively throughout the match and really didn’t deserve a result despite our possession advantage.  Good teams like Holland make that possession count.  We didn’t.

On the bright side, the USA have a lot to look forward to.  Our midfield of Musah, McKennie, & Adams were great all tournament (except today of course) and we have a very young squad, second youngest of the tournament from what I’ve heard.  Tim Ream came out of nowhere to have an excellent tournament, when, had everyone been healthy, he probably wouldn’t have even made the squad.  Our biggest Achilles heel however is we just don’t have a top striker at this level.  Perhaps we’ll have one found by 2026 that we can rely on, another Brian McBride, Landon Donovan, or Clint Dempsey.  Someone who can put the ball in the back of the net.

This for me has been a great World Cup with all of the various upsets and results.  Best wishes to the Dutch fans as their team advances and best wishes to England who I’d like to see get to the final.
TX Bill, EFC

Keep a lid on the brain farts, Gareth
I’m starting to believe that the success of international management is similar to the Hippocratic Oath doctors take: “first, do no harm”.

Watching Van Gaal, Martinez, et al, it seems that the first one of these tallest dwarfs to come up with a genius idea loses…

So far, Gareth has kept his brain farts to himself, even for the in-game management which is his particular weakness.

Go on my son, keep a lid on it and let us win.
Matthew (England)

The blame game
I’m sorry but I don’t understand Oliver Dziggel’s email from this morning. When did Ghana ever blame Uruguay for their 2010 exit?
All I’ve seen is talk of revenge which is normal. Rivalry is not common in Country based football but it still happens. My home nation Nigeria has suffered defeat at the hands of Argentina many times. Not just the World Cup but the Olympic final and the U-23 final where Messi scored two goals. When we play Argentina there is extra motivation because of this but do we blame Argentina? Why should we?
Maybe you don’t know the difference between revenge and blame.  They are two different things.
Damola, Bremen

An All Star World Cup team
Not sure if this idea has been floated around before, but what about an All Star team being added to the expanded world cup?

People always lament that world class players like Giggs, Auba, Weah (these spring to mind, I’m sure there are many more), don’t play on the biggest of all stages. An All Star team would allow the fans to appreciate these talents where they are meant to be. It would also give fans of non competing nations more interest. Most importantly, for FIFA, more cash would roll in from interest and advertising in the nation’s of the newly included players.

There should be some rules obviously. My suggestions;

Who would have made it to this world cup if the above rules were applied? Arsene Wenger/Mourinho for manager?

I don’t see a down side…
Simon

Ronaldo rant
Usually, I am just ignoring annoying people and articles on the internet, but lately I am becoming more and more
frustrated with both people and articles about CR7. First of all, I am not undermining his achievements and I’m not
even questioning do his numbers come from big games or not. One of the best players ever, one of the best athletes ever.
One of the greatest egos ever. Period.

What I hate is this: for the past few months, when I’m just trying to scroll through social media to see what’s new, very third article is about CR7
and how he got disrespected by United, then how his stats are better then Messi’s, then how he is unhappy, then how he actually touched the ball,
then how he actually did not touch the ball but without his distraction there would be no goal so he should actually be praised and now how
he is going to Arabia for world record wages and how that is actually a good thing because he will be shown deserved respect. And when I go into comments
(me being stupid obviously), there are numerous fanboys screaming “GOAT/he deserves this contract/he should actually be awarded that goal because he touched it with his hair”.
And when somebody raises valid question about his CURRENT form or the fact that he did not touch the ball, immediate attack is “what did you do? he is goat, show respect!”.
This “respect” in football is one of the things that I never understood. Just like in every other aspects of life, past achievements are not permanent immunity for current bad work –
it is always what you can do today and what will be able to do tomorrow. Past achievements indicate that you can do great things.
Imagine if somebody at your work did something great in the past, but at the moment he is doing mostly nothing but
being full of himself, blaming others for lack of respect and company production. Great co-worker, right? But in football, it is a way to show how disrespected you are?

I can understand respecting somebody, but idolising somebody blindly without questioning his behaviour on and off the pitch is just ridiculous:

– he was not disrespected by Man Utd- 500k a week was a proof of respect.
– 30 goals in 2 seasons did not justify his salary
– his tantrums on and off the pitch did not justify his salary
– there is no “I” in the team – if you win it’s not your heroics and when you lose it’s not your teammates fault. And if you don’t want to run and just raise hands it’s not teammates fault.
– He was praised for going back to PL and Messi was criticised for going to farmer’s league. Now if he goes to arabia which is sunday league compared to French 1st
it will not be a downgrade but deserved step because he will be shown respect.
– he knew he did not touch the ball (maybe his hair did), but that did not stop him to celebrate like he scored. If somebody did that to him, I doubt he would take it lightly.
Can’t imagine how bad he had to feel when Bruno stole the show instead of him. Can you imagine him passing the ball to teammate like Orsic did to Majer, Croatia against
Canada last goal?

I don’t doubt CR is a nice bloke if you sit with him and talk how great he is. He also did a lot of great things to other people, just as many rich people do.
But I doubt he is a nice bloke if you even try to ask valid question in which he is not GOAT. And I doubt even more that once he retires he will be pleasant person
to hang around because once the light are taken off him, ego will not stand it.
His social media stuff  will be bombing us with posts about his achievements, how great was he, etc. And at one point, he will become male version of Madonna –
once great, obviously a legend, but never figured out that today is well past her prime and that TODAY she is irrelevant. Her songs are still played across the world, and people like
THAT Madonna, not current one. Instead, she is shelling social media with her nude photos, showing everybody how low can you fall for attention.
I can imagine CR showing his abs in his 70s, still thinking he is the hottest person on the planet.

There is a one foreign punk song, and roughly translated chorus says this:
if you turn off the music, you will just see a fat ass, better check your idol again.
I wonder how many fanboys would be such happy puppets after sitting 2 hours with their idol.

So long and thanks for all the shoes.
John Doe