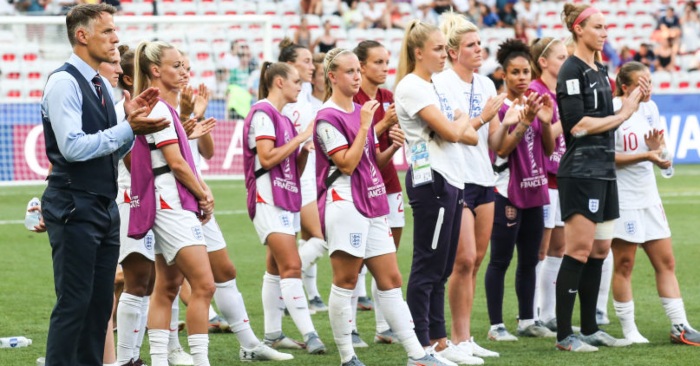 Phil Neville says his England players are not interested in returning as heroes from the Women’s World Cup because they haven’t won the competition.

The Lionesses finished fourth after being beaten by Sweden in the third-place play-off – a match Neville described as “a nonsense game”.

While he feels he will reflect on this World Cup and think the team “have made strides forward”, Neville has also said of England’s campaign, which saw them end up as beaten semi-finalists for a third successive major tournament: “It does feel like failure – we wanted the gold.”

He added: “The texts coming through of, ‘You’ve inspired the nation’ have been lovely but annoying, because we wanted to win. I’ve been brought up where winning is the only thing that matters.”

Regarding England’s return home, Neville feels “a bus-top tour or a trip to Downing Street” would be “celebrating failure” and says they have been turning things down.

“We don’t want any of that. They (the players) don’t want it,” said Neville, whose side were beaten 2-1 by Sweden in the third-place play-off on Saturday.

“If you lose in the FA Cup final, if you finish second in the Premier League, you don’t get an open-top bus tour around your city. You’ve got to win.

“It’s the harsh realities of the way I want to work. Yes, we want to celebrate with our supporters, that is important to us. We’re hoping that at Wembley in November (when England face Germany in a friendly) there will be 80,000 people there that we can say thank you to.

“But a bus-top tour or a trip to Downing Street for me would be celebrating failure. And we’ve said from day one that we don’t do that.”

Neville added: “The truth is that we are close, but we still need to start working harder. The work and the ruthlessness has got to get even more brutal.”

He does not envisage a “mass change of personnel” in the squad over the next year and has stressed how important senior players – the likes of Steph Houghton, Jill Scott and Karen Bardsley – have been in France.

Neville also insists he will remain in his position, saying: “I can’t think of a better job in football.”