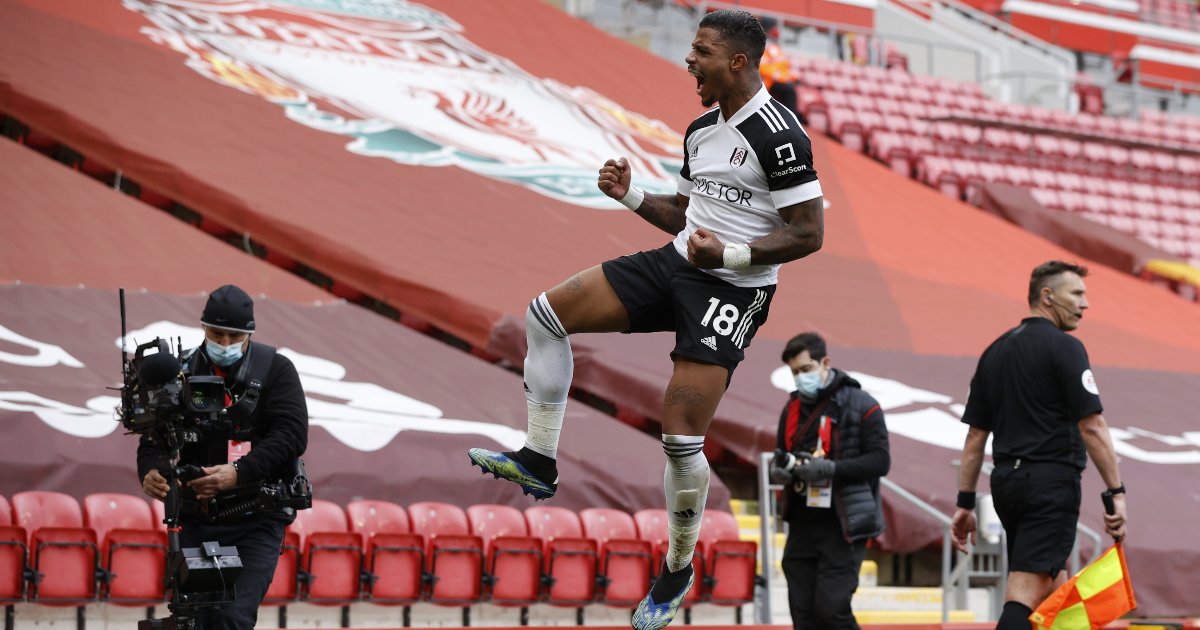 Mario Lemina’s first half strike was enough to earn Fulham a vital three points as they compound more misery on Liverpool.

Just when Jurgen Klopp thought things could not get any worse, after Thursday’s defeat to Chelsea brought up an unwanted club record, they did as he experienced his first loss against a promoted side which consigned the Reds to a sixth-successive home defeat.

So too for Mohamed Salah. Plenty had been made of his reaction to being substituted in midweek so what he really needed to do was lead from the front, having been handed the central striker’s role.

What he definitely did not need was to be the reason for Liverpool conceding the first goal for the sixth match in a row at Anfield, his loss of possession on the edge of his own area allowing Lemina to finish brilliantly just before half-time.

The Gabon midfielder became the first Fulham player to score against Liverpool at Anfield since Collins John in March 2006 as they won their first match on the ground since 2012, which on that day came courtesy of a Martin Skrtel own goal.

It meant Fulham’s revival, having lost just once in the last seven, are only in the bottom three by virtue of having a goal difference three worse than Brighton.

This is what it means! 💪#LIVFUL pic.twitter.com/XPVBRPWO8h

Liverpool remain four points off the top four and are likely to be further adrift by the time they run out for their Champions League last-16 second leg against RB Leipzig on Wednesday, a game which has taken on far more significance even though they hold a 2-0 lead.

Klopp’s seven changes – including three of his back four – with that in mind were the most between Premier League matches since the 2015-16 season, with the inexperienced pairing of Nat Phillips and Rhys Williams the 16th different centre-back combination to have started in 28 league matches.

It was perhaps unsurprising their first-half performance was disjointed, although they managed twice the number of shots on target (two) in the opening half-hour that they achieved in the entirety of Thursday’s defeat to Chelsea.

Even with Salah, Diogo Jota – making his first start since December after a knee injury – and Xherdan Shaqiri completing a new-look forward line they still did not look like scoring.

Fulham, however, frequently did with Ademola Lookman a threat cutting in from the flank as the visitors utilised a quick right-to-left diagonal to expose young full-back Neco Williams and the space between him and Phillips.

After Josh Maja hooked wide Lookman twice sprinted clear before working his way into the penalty area to shoot as Fulham looked to carry on the tactic which Thomas Tuchel’s side had been successful with.

Maja was also denied by Alisson Becker diving at his feet to prevent a certain goal from close range.

The closest Liverpool came was Shaqiri’s free-kick landing on the roof of the net with Salah’s first touch letting him down when put through earlier by the Switzerland international.

If that was poor his dithering in possession when Ivan Cavaleiro’s free-kick was half-cleared was fatal.

Lemina quickly closed down the Egypt international and superbly seized his chance with a low drive across Alisson and inside the far post.

The same 11 players were sent out early for the second half, the start of which was accompanied by the low buzz of a plane flying the banner ‘Unity is Strength. Let’s go Reds. YNWA’ overhead, and three minutes in Jota’s stinging volley produced a brilliant save from Alphonse Areola.

Klopp’s first change had to be an attacking one and it saw Sadio Mane replace midfielder Georginio Wijnaldum.

The forward was not quick enough to react when Shaqiri’s corner fell at his feet soon after arriving but was closer with a header which looped onto the post, mis-hitting another – this one from a cross from substitute Trent Alexander-Arnold – into the ground.

There was an air of desperation about the final 10 minutes with Liverpool effectively 2-2-4-2 when attacking, but it made little difference.

A sixth home game in the last eight finished goalless for them and in celebration for their opponents.