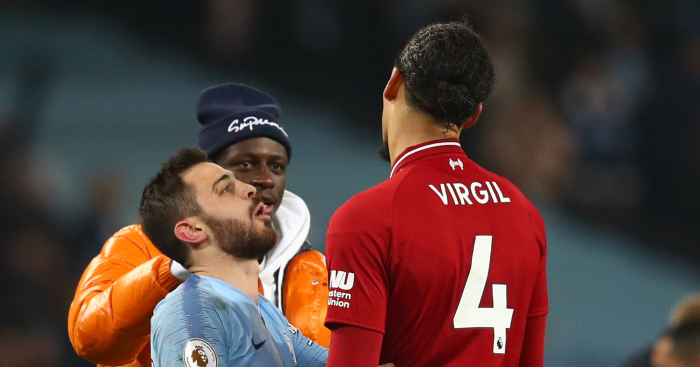 Manchester City v Liverpool was a very nice end to the festive season, and not a moment too soon, since a lot of sides looked leggy (read ‘not very good’) this time out. There were also rather more ‘rash challenges’ than usual, to use another euphemism. Speaking of which, after a record three straight weeks, Paul Pogba is most definitely not on the list (!!!). But neither is Jonjo Shelvey, so that evens it up. In a week with few really good contests, a bizarre eight out of 11 players come from only two matches. It’s a 4-3-3:

Goalkeeper: Ben Foster (Watford)
I really wanted to put Angus Gunn on the list. Thrown in at the deep end, he was superb at Stamford Bridge, absolutely top-class coming off his line to sweep. He also made himself big to stop Eden Hazard, and added a few other decent saves across the match. But Foster was dazzling in the second half against Bournemouth. First he made an astonishing point-blank leaping save to deny Callum Wilson, then came off his line decisively to block Josh King. He stopped King again a few minutes later with textbook positioning. In the first half he had also made a sensational stop, with a strong hand on Dan Gosling’s header, after which Nathan Aké put in the rebound. If you think Foster shouldn’t have left the rebound, put Gunn on the list instead – but I thought he did excellently, since he had to reverse direction to react to the shot.

Right-back: Junior Stanislas (Bournemouth)
Seems to be injured every other match, but he’s one of my personal favourites, because he’s always looking to advance the ball. Normally a winger, did very well in an unfamiliar position, including some decent defence against Roberto Pereyra. Got the ball forward with some really fine passing work, notched a somewhat fortunate assist, and lost a well-deserved assist when Josh King missed an unmarked header

Centre-half: Maya Yoshida (Southampton)
Last year at Stamford Bridge, playing in the middle of a three, Yoshida had his best game of the season, probably the best of his career. Unfortunately, his one error led to the only goal of the game. This year at the same stadium in the same position, he wasn’t quite as impressive, but played very well both staying back and charging around to mark or block. This time, his one mistake (going to ground against N’Golo Kanté) was nullified by a great save from his keeper, plus he made amends with a game-saving tackle on Kanté in the 87th minute. Given Ralph Hasenhüttl’s aggressive style, he’ll have a lot of work to do, and this was a very promising performance.

Centre-half: Virgil van Dijk (Liverpool)
If his name were Virgilio di Diccio and he played for Juventus, he’d be known to all as the best defender in the world. He may be anyway. Against Man City he was calm, precise, and nearly faultless. Once he charged forward a bit too enthusiastically and was beaten by Raheem Sterling. Otherwise he did everything right, which included just about everything a central defender has to do. I get regular criticism from Liverpool supporters when he’s not on the list. That’s as it should be – still, this is his fourth appearance, two more than anyone else. He’s the best.

Elsewhere, Victor Lindelöf wasn’t tested anywhere near as the others, but was excellent marking Salomón Rondón and controlling counter-attacks. Jannik Vestergaard had another good match for Southampton: outside centre-half in a three really suits him, as his big stride gets him to the wing quickly.

Left-back: Sead Kolasinač (Arsenal)
It was almost too easy against Fulham. With the Cottagers in a 3-4-3, there was only one wing defender, and Kolasinač ran Cyrus Christie off the pitch and onto the bench. Picked up one assist, lost another on a goal-line clearance, was key in the build-up to a third. He and Alex Iwobi form a potent pair, and right now he gets to the line more often than any full-back in the league. Elsewhere, Andrew Robertson was brave in both attack and defence, and delivered a very special assist. But eventually Raheem Sterling proved too much.

Central midfielder: Fernandinho (Manchester City)
He was cleanly beaten by the rapid exchange between Roberto Firmino and Mo Salah, and only the Goal Decision System saved him from embarrassment. Otherwise, peerless. In the big matches these days, he’s defender first and passer second. Go ahead, guess his pass completion percentage against Liverpool. Guess again. It was 70.9%, which may very well be his career low. But he was my co-man of the match with Bernardo Silva. He’s had as fascinating a career as I can recall. In his early Man City years he was The Toggle Switch, seeming to turn it off and on at a whim. Then he was the Solid Citizen, the most reliable performer in the squad. When Pep arrived, he became The Great Distributor, but seemingly too old to defend consistently. Now he’s The Rock.

Central midfielder: Hamza Choudhury (Leicester City)
Last man on the list this week, but he belongs. In a largely forgettable match against Everton, he stood out for a cool head (for once, no hair jokes) and steady technique. Read the game well, passed intelligently, did the job while everyone around him found creative ways not to. Had a better pass-completion percentage than Wilfred Ndidi and Nampalys Mendy, and a very nice statline too: five tackles, five interceptions, two clearances, two blocks. Maybe I should have put on one of the many good strikers available (see below), and made it a 4-4-2. But they’d all been on the list before, and all played well but not superbly. This was Choudhury’s best match, so let’s give him the gong.

Attacking midfielder: Bernardo Silva (Manchester City)
When David Silva and Kevin de Bruyne are in form, they make you say “Ah!” Bernardo Silva makes you say “Again!”. Rarely spectacular, but one of the most persistent and consistent midfielders in the league. Seems to enjoy defending as much as attacking, and is always doing one or the other. Against Liverpool he was the heart of the side: more touches and a better pass-completion percentage than anyone except John Stones and Vincent Kompany. Added some fine defending and an opportunistic run and cross for the first goal. Was part of that famous Monaco side that got to the Champions League semi-finals, defeating Manchester City along the way. No reason he can’t go as far or further in sky blue.

Elsewhere, Tom Cairney has been a bit of a disappointment for Fulham, with his trademark playmaking rather spotty. Granted plenty of open space by Arsenal’s midfield and defence, this was probably his best game of the season. He deserved an assist, but Ryan Sessegnon couldn’t convert. Moussa Sissoko rumbled forward for Spurs in the win over Cardiff, playing a part in two of the goals. His defence was sometimes there, sometimes not, and so a cult hero marches on.

Winger: Leroy Sané (Manchester City)
Started with an excellent first half, alternately driving to the line or drawing Alexander-Arnold out of position and combining with teammates. Before Sterling broke loose in the second half, most of the good attacking moves went through Sané. His burst and shot started the chaos that led to Agüero’s goal. Still played well but wasn’t as involved in the second half, at one point started to misplace his passes – and then the brilliant finish. The ball was very slightly deflected by Alexander-Arnold, but looking at the angle I’m positive the ball goes in anyway. Also mucked in defensively as the clock ticked down. Let’s give Sterling credit too for a fantastic match – he was the main attacking impetus in the second half, got the assist for Sané, and created a decent chance for David Silva in the first. If he finishes that chance near the end of the match, he’s on the list too.

Winger: Ryan Fraser (Bournemouth)
What a season for the wee man known as Wee Man, and on this feature as the Aberdeen Arrow. Defenders presumably use something a little more unprintable. If you combine his Expected Assists for set pieces and open play, he’s the very best in the league at chance creation. Against Watford he gunned it substantially over the speed limit, running at the defence until exhaustion set in with about 10 minutes to go. Scored with a typically precise finish, got a set-piece assist and was robbed of a second by Foster’s most remarkable save.

Ken Sema of Watford just missed out. He’s been filling in for Will Hughes lately, without much distinction: competent but tentative, rarely offering anything special. But in the first half against Bournemouth he was a different player altogether: confident in attack, getting free on the wing and into good positions in the middle. The result was a very well-taken goal and a neat weaker-foot cross to assist Troy Deeney’s header. In the second half he sort of retreated back into his shell, but a little more of that could make him a regular.

Elsewhere, Christian Atsu was Newcastle’s danger man from start to finish, his pace repeatedly getting behind Manchester United defenders. That last ball or shot just didn’t happen, but it was his best match of the season. David Brooks, who’s been a bit quiet lately, was another Bournemouth man regularly on the attack. Alex Iwobi continues to blossom, and could easily have had more than his one assist. At this point he looks undroppable, and how many would have guessed that?

Striker: Troy Deeney (Watford)
Am I the only one who thinks Deeney’s on-field demeanour has been a bit edgier these past two years? In any case, there was plenty of edge to his play against Bournemouth, with two quite clinical finishes and an assist with a Route One flick-on. He could easily have had a couple more assists, but wayward finishing and a fine tackle by Steve Cook kept the numbers down. Every time you think he’s past it, he comes up with a strong performance, and even when not at his best he’s been a good partner for Gerard Deulofeu.

Marko Arnautovic checked in with a brace in a most untypical performance. Usually he’s driving in all directions, pulling defenders out of space. Against Brighton he was flat for an hour, like the rest of the side, then out of nowhere nailed two very difficult finishes. Marcus Rashford had another strong match for Manchester United, surviving Jamaal Lascelles’ male-bovine-amongst-the-Spode act and potting the clincher. Ole Gunnar Solskjær has pressed the reset button, and Rashford now looks like exactly what he should be: a young striker, a bit raw, getting more confident every day.

Sergio Agüero clearly deserves mention as well. He was City’s best player in the first half, with excellent movement and passing combinations. The goal was classic Agüero: manoeuvring in tight spaces and an unsaveable smash. He seemed to tire in the second half, though. Then there’s Roberto Firmino, who reveled in the open spaces, and whose lovely combination with Mo Salah led to Sadio Mané’s big chance. A very good goal too, in its own way: arrive at the right spot and you get the simple finish.